$100M in new funding for bridge upgrades across Australia

The Australian Government is investing $100 million to fund 164 bridges to deliver much-needed economic and safety benefits to communities around Australia under Round Two of the Bridges Renewal Programme.

The Coalition's new Bridges Renewal Programme is proving very popular, with Round Two seeing a significant increase in the number and quality of applications from local governments.

Only councils were eligible to apply for this round and 270 applications seeking around $220 million in Australian Government funding were received, with 141 being successful. Acting Prime Minister, Minister for Infrastructure and Regional Development and Federal Member for Wide Bay Warren Truss reported:

“The Bridges Renewal Programme is designed to bolster the productivity of Australia's local bridges to better serve communities and give councils the support they need to drive greater efficiency in road freight and traffic movement,” Mr Truss said.

“We understand that local government has responsibility for thousands of local bridges, many of which are in a poor state of repair. Some councils face critical bridge issues beyond their capacity to address.

“By upgrading these bridges, residents will enjoy better, safer and more reliable road access. Freight from farms and local factories will also be able to pass more safely along quicker routes, improving their productivity.

“It's a win-win situation. That's why the Coalition Government identified local bridge upgrades and repairs as a national priority and has committed a total of $300 million in funding over five years from 2014–15.

“The Australian Government's financial commitment of $100 million in this round of the programme will be matched by local councils and/or State governments, delivering a total investment of at least $200 million towards upgrading bridges.

“This funding is in addition to the Australian Government's $111 million committed under Round One of the Programme.”

More on the Bridges Renewal Programme, including a full list of successful Round Two projects and details on the application process, is available online at: www.infrastructure.gov.au/bridges.

164 BRIDGES TO BE REPLACED UNDER ROUND TWO

Local Government is responsible for thousands of local bridges, many of which are in a poor state of repair, and this latest funding will play a critical role in maintaining and developing reliable road access. Details concerning successful Round Two projects are available on the links below. 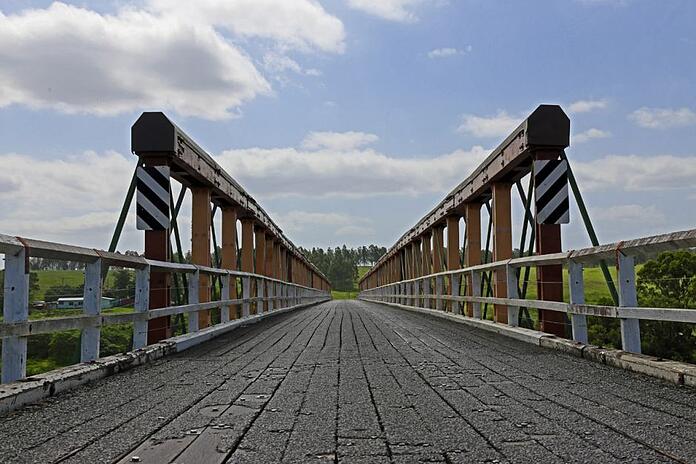 Image Source: The Southern Hemisphere's longest timber bridge, in the northern New South Wales village of Tabulam, will be demolished and replaced in 2016 (ABC North Coast: Samantha Turnbull)
Some Councils put in for multiple bridges in their electorate and Mr Truss highlighted some of these projects in his media statements today.

Nine bridges for Page: Motorists across the Page electorate can look forward to safer and more efficient travel in the future, with almost  $4 million from Round Two of the Australian Government's Bridges Renewal Programme being invested in fixing nine bridges in the electorate.  In the case of the Romiaka and Barretts bridges, new wider structures will be built with greater load capacities. The Romiaka Bridge will also have a two metre wide footpath added.Similarly, six single lane timber bridges along Gradys Creek and Lions Roads will be replaced with wider, galvanised steel structures with capacities of 50 tonnes. Up until now heavy vehicles have occasionally had to use a detour of up to 115 kilometres because the six existing bridges are unsuitable, costing businesses time and money. The two lane Jacks Bridge at Ramornie will be replaced with a concrete pipe culvert, which will improve driver safety and ensure heavy vehicles can continue to travel between Grafton and Glen Innes without having to go via lengthy detours.
Two bridges for Kandanga: Two troublesome bridges near Kandanga will be replaced thanks to almost  $1.9 million from Round Two of the Australian Government's Bridges Renewal Programme. The Goomong Road bridge and another on Kandanga Creek Road will be replaced to ensure safety and efficiency for heavy vehicles and other local road users. he existing single lane Goomong Road bridge will be replaced with a two lane concrete structure. The current bridge has a 15 tonne limit and a recent engineering inspection indicates it is no longer able to safely carry the number of heavy vehicles using it each day. The new bridge will have a 160 tonne limit and its preliminary design has already been completed. Likewise, the narrow two lane timber bridge on Kandanga Creek Road is in poor condition and only has a 36 tonne limit. It will be replaced with an 8.4 metre wide two lane concrete structure with a 160 tonne limit, which will help boost productivity for local farmers and producers. Mr Truss said the Goomong Road bridge project will receive $955,500 from the Australian Government, while the Kandanga Creek Road project will receive $920,500.
Gutchy Creek Bridge at Gunidah: The ageing Gutchy Creek Bridge at Gundiah will be replaced with a new two-lane concrete structure thanks to  $1.144 million in Australian Government funding under Round Two of the Bridges Renewal Programme. This project will replace a one-lane, 10 tonne limit timber bridge with a two-lane, 40 tonne limit concrete bridge which will be 28 metres long,” Mr Truss said. Gutchy Creek divides the Gundiah community and these improvements will save heavy vehicles a 78 kilometre detour at a cost of $1,200 per load and improve access and response times for emergency services by removing a 35 kilometre detour.

OPPORTUNITIES FOR SUPPLIERS AND CONTRACTORS

To have a look where projects are starting near you, take a closer look at your state's infrastructure timeline.

You need to set yourself apart from other potential suppliers and stay on the agency’s radar. To help you do just that, we've collected information from a recent Queensland Government Tendering Workshop and created a free eBook on how to prepare a business capability statement for Government contracts.

The preferred design for the Mulgoa and Castlereagh Roads upgrade has been released, with a $100 million in funds allocated to progress Stage 1 of the project.