Major works to deliver a new river crossing over the Clyde River at Nelligen in New South Wales have commenced and motorists travelling on the Kings Highway are a step closer to having a safer and more reliable journey along this route.

The $148 million Nelligen Bridge Replacement project will include:

“We know how important the highway connection is between Canberra and the coast for the local community, visitors to the region and transport operators. This new bridge marks a major investment in safer journeys for the thousands of people who use it every day.

“The new bridge will increase safety for motorists, pedestrians and cyclists by providing an improved curve on the eastern side of the bridge, with wider lanes and shoulders, plus a safety barrier between the road and footpath.

“The project will also improve access around the river's foreshore with a two-metre-wide path linking Thule Road and Reid Street, along with a new community space to be built on the western side of the existing bridge,” Member for Bega Andrew Constance said. 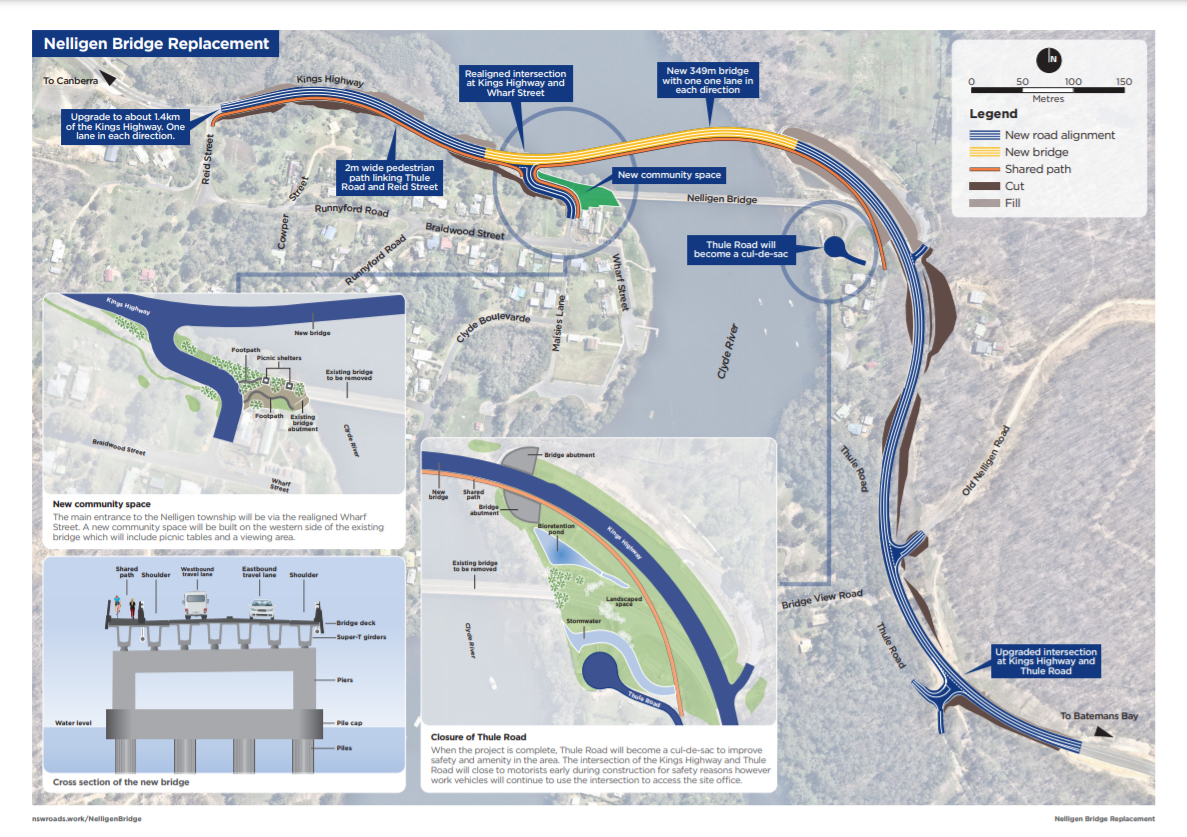 Seymour Whyte Constructions was appointed to build the new 349-metre-long bridge. Scope of works under the company's contract also include bridge and abutment works, delivery of a shared user path, intersection upgrades, demolition of the existing bridge as well as landscaping works that will help improve urban design and access around the river's foreshore.

Seymour Whyte General Manager – Southern Steve Lamber said in a re-published statement: “We will work very closely with local industry and stakeholders to minimise construction impacts on local environment. Bespoke environmental sustainability management plans and measures for erosion and sediment control, marine and vegetation biodiversity management, including the salvage and translocation of seagrasses, will be implemented on the project to protect land and marine environments.”

“We look forward to working with our client, TfNSW (Transport for NSW), and local stakeholders to deliver this vital piece of infrastructure for road users and the Nelligen community.”

The new Nelligen Bridge is due to open to traffic by late 2023 and the entire project completed by late 2024, weather permitting.

Senex Energy and Jemena have signed an agreement that will fast track the delivery of the Atlas Gas Processing Plant and Pipeline (AGPP). Under the agreement, Jemena will build, own and operate the AGPP, which will be connected to Senex’s new Atlas gas field in the Surat Basin in Queensland.

The Victorian State Government has announced an Alliance of Laing O'Rourke, Fulton Hogan and Jacobs has been chosen as the preferred bidder for a $500 million package of works in Melbourne, including the duplication of the Hurstbridge line, construction of a new Rosanna station, and removing level crossings at Lower Plenty and Grange Roads.

400 NT jobs to be supported through new road upgrades investment

The Australian Government is fast-tracking the delivery of the Beetaloo Basin gas project – which will boost economic activity in the region – through the Northern Territory’s Gas Industry Roads Upgrades program, funded through the Roads of Strategic Importance (ROSI) initiative.