Western Australia’s $165 million Stephenson Avenue Extension is ready to move into Phase 2 works following the award of an alliance construction contract to ACCIONA, Clough and WSP.

“Clough’s relationship with Main Roads goes back over 60 years and I’m pleased to see with this award that we continue to work together to deliver a safe and efficient key transport infrastructure that connects, builds and grows our city, Clough CEO and Managing Director Peter Bennett said.

Phase 2 of the project will extend Stephen Avenue from Howe Street to Mitchell Freeway and Cedric Street. This project will deliver:

“Phase 2 works of the Stephenson Avenue Extension is a significant project that will help to make the Stirling City Centre a more vibrant place, and ease traffic congestion through this area.

“For people that commute through this area and catch public transport, these works will transform the way they commute, and make travelling through this area much easier,” State Member for Balcatta David Michael MLA said.

The Stephenson Avenue Extension Phase 2 is being delivered by Main Roads WA, in partnership with the ACCIONA Clough WSP alliance, and major construction is anticipated to commence in early 2022.

In addition to the Phase 2 works, a $90 million upgrade to the Stirling Bus Interchange will also be delivered. This will increase the capacity of the interchange from an 18-stand to a 30-stand facility.

“This result is a massive win for Stirling residents. The Morrison Government’s investment in this project will help deliver more local jobs, improve amenities, and create a vibrant community.

“Not only will this project ease traffic congestion, but it will also unlock large areas of land for new commercial development, helping the City of Stirling achieve its vision for a second CBD outside of Perth,” Federal Member for Stirling Vince Connelly MP said. 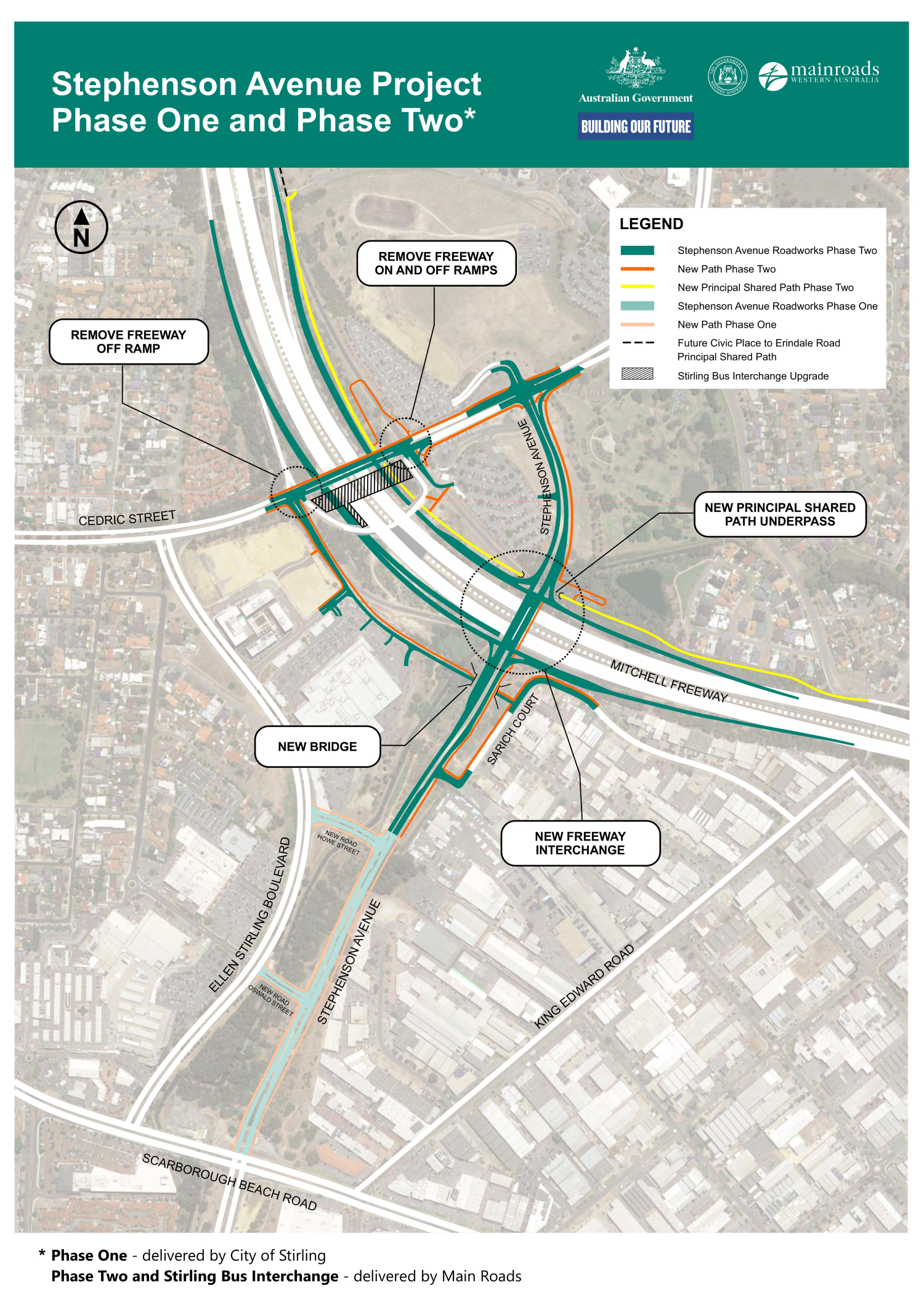 The first phase of the project – being delivered by the City of Stirling – is due to be completed by the end of this year.

An estimated 800 jobs are expected to be created during the delivery of both phases of the project, supporting the local economy.

The multi-million-dollar project is due to be completed in late 2023.

“The Stephenson Avenue Extension is the first stage of the City of Stirling’s vision to open up 55 hectares of developable land and transform the area into the Stirling City Centre – a lively hub that will be home to 30,000 residents and 25,000 jobs.

“This project will improve access to important commercial and residential hubs, as well as provide key road, public transport, walking and cycling links for residents and businesses,” Minister for Transport and Planning Rita Saffioti said.

The Australian and Western Australian Governments are each contributing $127.5 million towards the delivery of the Stephenson Avenue Extension and Stirling Bus Interchange upgrade.

“Under the Urban Congestion Fund, we are delivering 182 packages of work nationwide. The total number of projects that are now completed or underway nationwide is 73. A further 30 are expected to start construction this year.

“This is just the latest example of us delivering on our commitment to progress critical infrastructure projects across the country under our record $110 billion, 10-year infrastructure investment pipeline, which is helping to drive Australia’s economic recovery,” Minister for Communications, Urban Infrastructure, Cities and the Arts Paul Flether MP said.