The concept design for the Truro Bypass in South Australia has been revealed and is now out for public consultation, taking the first major component of the Greater Adelaide Freight Bypass a step closer to becoming a reality.

Planning on the Truro Bypass project is progressing well to find the best solution that will improve road safety, boost freight productivity as well as remove up to 600 B-Doubles and road trains from Truro’s main street. The project route, however, will be kept close to the town to ensure continued tourism and business opportunities.

Community engagement will get underway this month and locals are given the chance to provide feedback that will help inform the design and, at the same time, share ideas to enhance the Truro main street.

“The Sturt Highway is the major road freight corridor connection between South Australia and New South Wales and the demand to cater for larger freight vehicles is only increasing.

“The Truro Bypass will help boost the efficiency of this vital freight corridor by removing the need to travel through the town’s main street for the approximately 600 B-Doubles and road trains which do so every day.

“The project also complements our joint $87.5 million investment to upgrade the Sturt Highway between Renmark and Gawler to improve access requirements for higher efficiency heavy vehicles, as part of the Roads of Strategic Importance initiative,” Deputy Prime Minister and Minister for Infrastructure, Transport and Regional Development Barnaby Joyce said.

If you are interested in providing feedback on the project, you can do so by visiting the project webpage here. 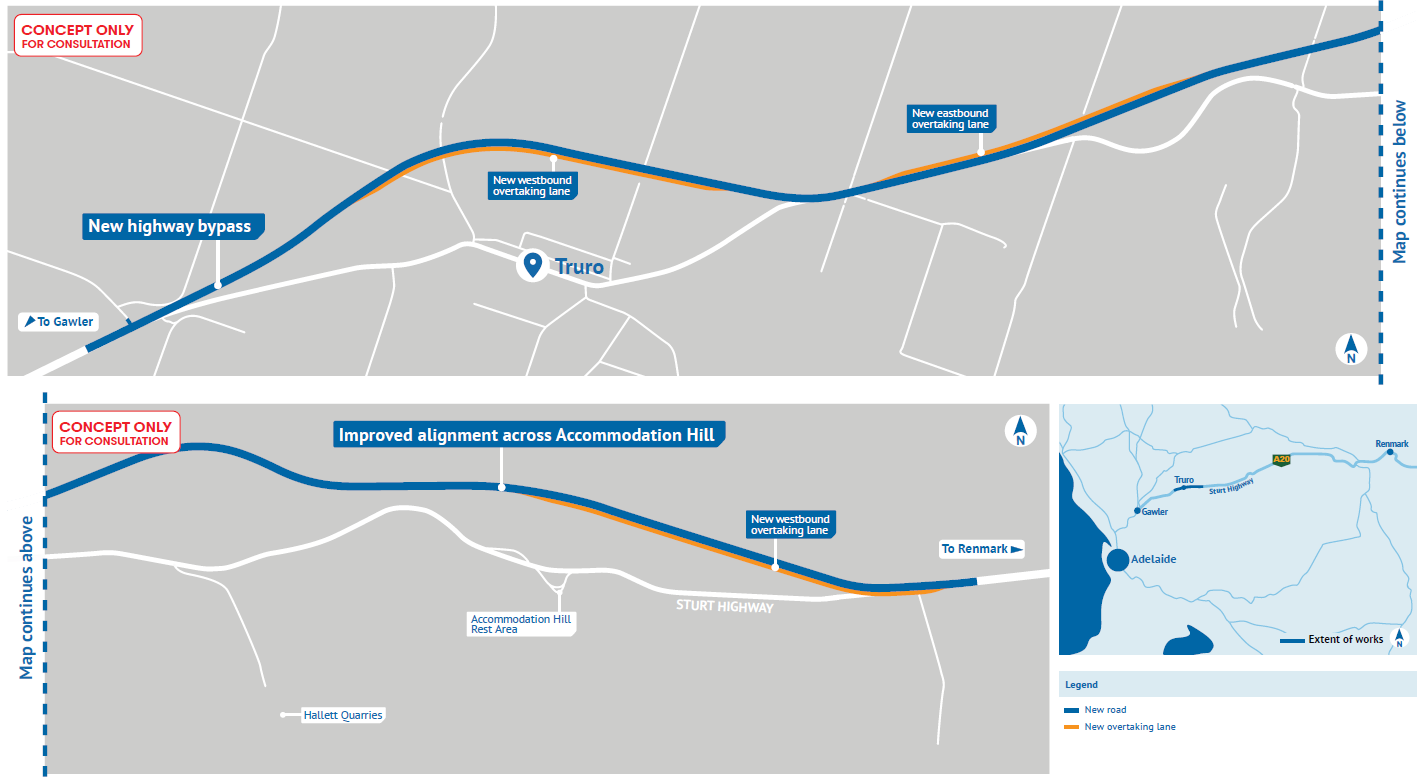 Indicative alignment of the $202 million Truro Bypass project – developed during the early design phase – includes diverting the Sturt Highway to just north of the town and across Accommodation Hill.

The final bypass alignment is anticipated to be announced in early 2022, following site investigations and community consultations.

The new bypass will not only improve safety, it will also be a significant part of a larger approach that will divert trucks away from the South Eastern Freeway.

“On average, approximately 4,000 vehicles travel through the town of Truro per day, of which 30 per cent are heavy commercial vehicles, including an average of approximately 600 B-Doubles and road trains per day.

“This project will remove the need for these heavy vehicles to negotiate the main street of a town where there are many other vehicles and pedestrian movements.

“Additionally, this option has been identified due to its significant reduction in steep gradients – meaning trucks and commercial vehicles could move along the National Highway safely and efficiently, particularly through the Accommodation Hill section,” South Australia Minister for Infrastructure and Transport Corey Wingard said.

In addition, the Truro Bypass is going to be kept close to the township, ensuring that locals will continue to have easy access to the township as well as encouraging visitors to stop.

Building the Truro Bypass will further support the development of the Greater Adelaide Freight Bypass that will run between Sturt Highway and the South Eastern Freeway, via Murray Bridge and Sedan. This development is part of a broader freight network that will divert heavy vehicles away from Adelaide and the South Eastern Freeway – which is currently under planning studies.

This project also allocated $1 million to help unlock opportunities that will enhance the amenity of the Truro township.

“We understand the importance of supporting regional communities like Truro to thrive and this $1 million is aimed at creating opportunities to support the Truro community.

“These upgrades would help build the existing amenity and historical character of the town with enhancements including main street beautification, improved public amenities and tourism signage to encourage travellers to stop off in the town,” Federal Member for Barker Tony Pasin said.

The SA Department for Infrastructure and Transport will work with Mr Pasin and Mid Murray Council to create a master plan exploring these opportunities in greater detail.

Construction on the Truro Bypass project is anticipated to commence in early 2023 and is due to be completed in 2025. Approximately 365 full-time equivalent jobs each year are set to be supported over the construction phase.

The $202 million project is jointly funded by the Australian and South Australian Governments through an 80:20 basis.

Barminco - a subsidiary of Perenti Group - will be delivering underground mining services at the Savannah Nickel Mine in Western Australia’s Kimberley region with a $200 million contract award from Panoramic Resources.

Macmahon Holdings has been awarded a new $200 million contract by Anglo American Australia for mining works at the Dawson metallurgical coal mine in Queensland.