Twenty-two (22) eligible expressions of interest (EOIs) received by the Australian Renewable Energy Agency (ARENA) for its $100 million large-scale solar photovoltaic (PV) competitive round have been short-listed and invited to submit full applications for consideration.

ARENA CEO, Ivor Frischknecht, said the expression of interest (EOI) phase had attracted strong interest, including several new entrants to the market, and the overall quality of proposals was high.

“ARENA received 77 eligible EOIs [in early Novemeber 2015] and has selected 22 high merit projects to proceed to the full application stage with submissions due by 15 June 2016.

The projects are located in all mainland states and have a total capacity of 766 megawatts (MW). Each project was able to demonstrate its cost of energy was below the threshold of $135 per MWh, with some projecting costs significantly below this threshold level."

Mr Frischknecht said the funding round was well timed to drive innovation and reduce solar PV supply chain costs in Australia, where large-scale solar was still in its infancy.

"ARENA's support will ensure a series of large-scale solar projects get off the ground and will help move large-scale solar costs in Australia further down the cost curve, potentially to less than $100 per MWh by 2020.

It is clear that large-scale solar has the potential to become one of the most competitive forms of energy in the world.  It is also clear that, despite our significant solar advantages,

Australia has some work to do to catch up to countries with more mature large-scale solar industries – our grid-connected large-scale solar capacity will shortly reach 240 MW and is generated by a only a handful of solar plants." 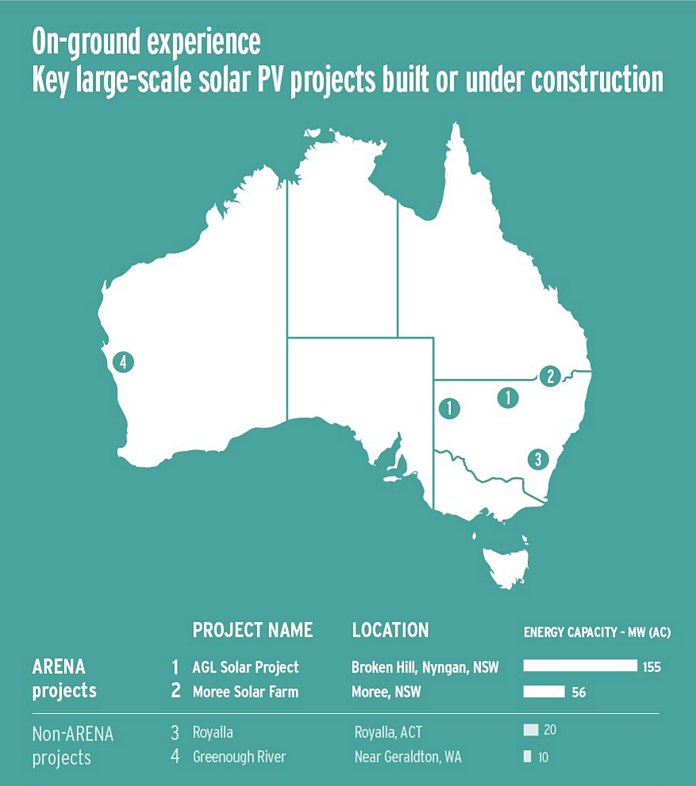 An additional 200 MW would significantly boost Australia's large-scale capacity, with the combined 440 MW total of large-scale solar able to generate up to 860,000 MWh of electricity each year, enough to power 120,000 average Australian homes.

22 high merit projects have been selected to proceed to the full application stage. The projects are located in all mainland states and have a total capacity of 766 megawatts (MW).

More info about the scope of activity and application deadlies can be accessed from ARENA here.

Queensland is perhaps understandably a prime location for solar power projects – and this was certainly the case with this latest round of applications. Out of the 22 plans to move to the next stage, 10 were based in the Sunshine State.

"We've got it all here in Queensland – not only the space and the sunshine, but the world-class technological and research facilities that can help position us a world-leader in large scale renewables as well as rooftop solar PV," noted State Minister for Energy, Biofuels and Water Supply Mark Bailey.

Although Queensland might be leading the way in terms of generation, it's not necessarily a standout performer when it comes to renewable energy usage. Around 95 per cent of energy used in Tasmania over the course of 2014 was renewable, followed by 40 per cent in South Australia.

For those looking to put their bids forward, we’ve created a free eBook on 10 tips to successful tendering. The content of this eBook was developed from a QLD Government tendering workshop so be sure to download it below to get a thorough understanding of what's going to help your business stand out from the crowd.

Best of luck with the full applications (due in June 2016) for the project!

More Queensland projects have been chosen as part of the latest Australian Renewable Energy Agency’s (ARENA) funding round than any other Australian state, with six large-scale solar generation plants to be built in regional Queensland.

AGL Energy has signed a binding agreement with Hillgrove Resources Limited for the rights to build, own and operate a 250MW pumped hydro energy storage development on the site of the old Kanmantoo copper mine in South Australia.

$1.17bn Robertstown Solar Project in SA given the green light for development