$24.7b Australian Pacific LNG project to start this month

The Australia Pacific LNG project is a coal seam gas (CSG) to liquefied natural gas (LNG) project delivering a cleaner, greener sustainable energy source. It will be a source of major investment through to 2020, creating around 10,000 jobs throughout the life of the project, increasing local skills and boosting regional economies. Origin Energy recently confirmed November as the date for the long-awaited start-up of its $24.7 billion project in Queensland, making it the third of the state's huge gas export projects to begin production this year.

Project: Australia Pacific LNG is already the largest producer of gas from coal seams in Australia, supplying gas to power stations to produce lower emissions electricity to major industrial customers, homes and businesses in South East Queensland. The Project will see an increase in gas production to supply an export market, as well as to further supply gas-fired power stations, major industrial customers and residents throughout Queensland. The Project’s domestic production is currently equivalent to more than 40 per cent of Queensland’s gas requirements. The LNG Facility currently under construction on Curtis Island, near Gladstone will receive and process the natural gas by cooling it to -161˚C until it becomes a liquid, enabling transport to export customers in Japan and China.

Size: Two processing trains, each with the nameplate production capacity of 4.5 mtpa

Origin's head of integrated gas, David Baldwin, said the first LNG cargo would be shipped from the plant in Gladstone "a few weeks thereafter".

The news of the milestones came in a quarterly production report that saw Origin's oil and gas output rise 13 per cent in the September quarter from the June quarter, to the equivalent of 47.8 petajoules. Revenues still slid by 1 per cent to $224.5 million because of lower prices.

Ahead of the start-up the APLNG venture is selling some gas to fellow Queensland LNG exporter BG Group, but the prices are linked to oil and include a fixed component that allows BG to make a return on its export venture. That makes those sales to BG's Queensland Curtis project "barely profitable," Macquarie analyst Ian Myles noted.

Origin this week completed the last stage of a $2.5 billion equity raising that will allow it to immediately reduce its debt, which has been lifted by funding required to complete APLNG.
Origin's key partner in the project, ConocoPhillips, has meanwhile reassured investors that the biggest customer for APLNG, China's Sinopec, is set to take its full take-or-pay sales from the venture, despite the weak Chinese gas market.
However it acknowledged that some concessions to Sinopec have been made, by allowing the Chinese customer and partner to re-sell cargoes.
"We've also given them the right to divert cargoes outside China, but as a take-or-pay contract and with a price formula  that's tied to oil," Conoco executive vice president finance Jeff Sheets said in a September quarter briefing.
"We don't have any concerns ... about the sanctity of that contract."
Contributions to communities and the economy: Development of the Australia Pacific LNG Project will bring many benefits to the economies of regional communities, Queensland and Australia. 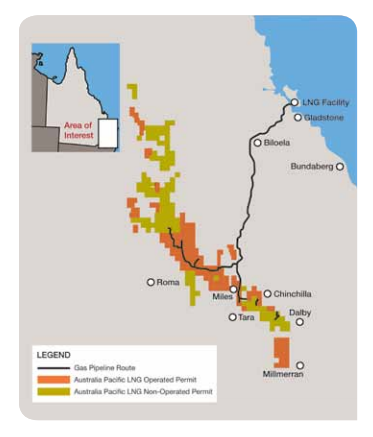 Kingsford Smith Drive has regularly been identified as the Brisbane City Council's 'next priority'. The major road links the Brisbane CBD to the Brisbane Airport, Port of Brisbane, Northshore Hamilton and the Australia TradeCoast area. Traffic congestion is nothing new for this major road and has been a talking point in Brisbane for decades.

The Federal Government has agreed to financially support the proposed expansion of the Gold Coast Light Rail project, allocating $95 million towards the long-awaited second stage of the rail line. With all three levels of Government committed to fund the extension, construction is expected to start in April 2016 and completed in time for the 2018 Commonwealth Games.