Construction will soon commence to upgrade the Bribie Island Road in Queensland as the State and Australian Governments reach an agreement to put forward $30.4 million towards the project.

“Moving forward with priority projects is important now more than ever to support local jobs, bolster our economy and provide the safe and efficient transport connections needed for all Australians to get moving again.

“This package of works will provide a safer, smoother journey along the region’s main connection to the Bruce Highway while creating much-needed local jobs, which is fantastic news for the community and the local economy,” Deputy Prime Minister and Minister for Infrastructure, Transport and Regional Development Michael McCormack said.

In addition, this project will duplicate the road up to the existing four-lane section east of Saint Road and deliver other road safety works between Hickey and Old Toorbul Point roads.

“This agreement adds to the $3.13 billion, 3,000-job roads and transport program being delivered in the region by the Queensland Government, like the soon to get under way $662 million Bruce Highway upgrade between Caboolture and Steve Irwin Way,” Transport and Main Roads Minister Mark Bailey said. 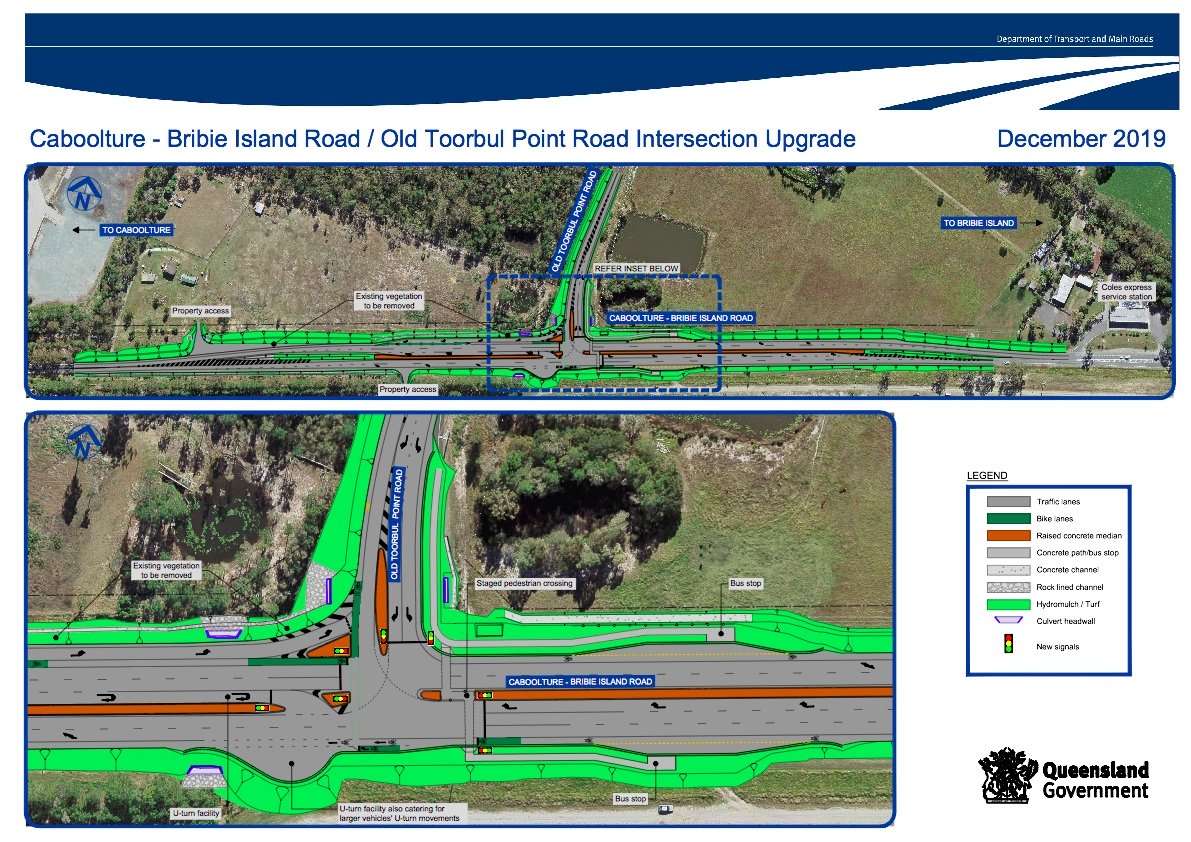 The significant investment includes the $1.42 billion Pine River to Caloundra corridor upgrade that intersects with the Bribie Island Road – which is also the main road to Brisbane – and the $600 million upgrade between Bribie Island Road and Steve Irwin Way.

“This is all part of the Australian Government’s ongoing commitment to improve our road networks to get Australians home and spending time with their loved ones sooner and safer – no matter where they live.

“We have many people living and working in the electorate of Longman who use these roads every day, so it’s important that they feel safe while navigating to and from work or home,” Federal Member for Longman Terry Young said.

The Bribie Island Road Upgrade is jointly funded by the Australian and Queensland Governments, each contributing $20 million and $10.4 million respectively.

The first sod has been turned and construction is now underway on the Sunshine Coast’s $301.25 million Bruce Highway Upgrade on the Maroochydore Road and Mons Road interchanges.

The joint venture between Seymour Whyte and John Holland has been appointed to deliver vital upgrade works on the Maroochydore Road and Mons Road interchanges on Queensland’s Bruce Highway.

With construction set to begin in the coming weeks, an animated project concept has been released to the public to give motorists a glimpse of the $301.25 million upgrade on the Maroochydore Road and Mons Road interchanges on the Bruce Highway.