Things aren't looking very sleepy at all for the Andrews Labor Government's $416 million Murray Basin Rail Project (MBRP), with the laying of 100,000 new sleepers underway between Maryborough and Mildura. The project, which has received more than half it's funding from the Labor Government ($220 million), will upgrade and standardise the entire Murray Basin freight network, and better connect primary producers to the State’s major ports in Portland, Geelong and Melbourne. 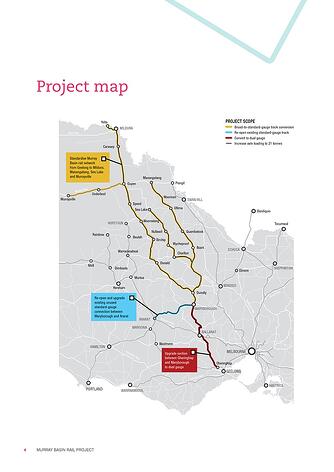 Works were welcomed by the Minister for Agriculture and Regional Development, Jaala Pulford, who has renewed calls for the Federal Government to partner with the Labor Government in delivering the project.

“The Andrews Labor Government has put $220 million towards this project, and is calling again on the Federal Government to pay their fair share.

They have had the business case for the project for more than six months and it’s time for them to support farmers, their families and our economy, and commit this vital project.” – Minister Jaala Pulford

This project will see a much needed upgrade and standardisation on the entire Murray Basin freight network.

At the moment, broad gauge sleepers are being laid in Maryborough. These sleepers will provide a safer and more reliable main freight line right away, as well as pave the way for the next phase of the MBRP.

As the sleepers are made out of wood, they can be converted easily to a standard gauge. This helps minimise the time the Mildura line will be closed throughout Stage 2 of the project, which will be the time the Murray Basin freight network is standardised.

“The sleepers being laid today will improve safety and reliability of the main freight line straight away, and pave the way for the next phase of this critical project – the upgrade and standardisation of the entire Murray Basin freight network.” – Minister Jaala Pulford

Stay up to date with the latest news on construction projects all across Australia by subscribing to Felix Project News today.

Author's note: Original article is from The Premier of Victoria

Following last month’s announcement of the preferred locations for three Cross River Rail stations in the Gold Coast, the Queensland Government has confirmed the final locations of each station, marking another project milestone.

Another major milestone has been reached by OZ Minerals’ $916 million Carrapateena copper-gold project, with the mining lease already granted by the South Australian Government. The Australian Government has also given the Environmental Protection and Biodiversity Conservation (EPBC) Act approval for the project.