In early March the QLD Government declared Genex Power's $580m solar and energy storage project a prescribed project, meaning that the Coordinator-General can assist Genex Power to progress the project.

The project site is the Kidston Gold Mine, which closed in 2001. It is located about 270km north-west of Townsville near Georgetown.

Making use of the old mine site means that the project benefits from extensive existing onsite infrastructure and materials, mitigating the need for significant capital expenditure that would otherwise be required.

Genex said that the development of the solar farm, alongside the energy storage project, was believed to be a world first.

It's a pretty exciting prospect - the fact that the rehabilitation of an old mine site involves such a monumental renewable energy project, and the fact that Australia is possibly the first to put such a project in place shows a real commitment to rewnewable energy. Given that Australia boasts so many mine sites, the potential for further projects is huge. I almost want to pat myself on the back for living here. 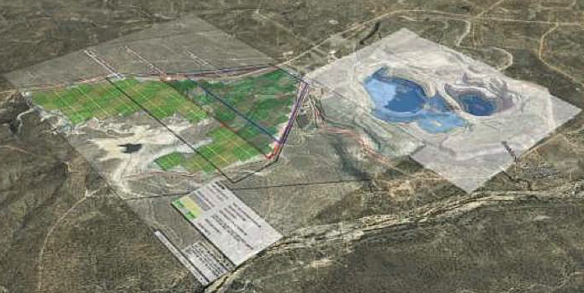 Let's take a closer look at the projects:

The solar farm is one and a half times as big as the biggest solar farm in Australia at the moment, which is only 100 megawatts.

To put it in perspective, the Kidston Gold Mine solar farm would have enough power to feed 30,000 households. It has the potential to meet all the peak power generation demands of North Queensland and some of Central Queensland.

This was 1 of 10 QLD solar projects shortlisted by Australian Renewable Energy Agency for funding in early 2016, with full applications are due in June 2016 subscribe to our blog to find out what happens!

Construction is expected to start in the final quarter of 2016, with first power being fed into the grid by the end of 2017.

The site has 2 large adjacent mine pits that will act as the upper and lower reservoirs for the project.

The plan is for water to be released from one of the former mine pits into the other by using reversible turbines. During off-peak periods, the turbines will be able to pump the water back into the upper reservoir to repeat the cycle.

It has been designed to support 1,650 MWh of continuous power generation in a single cycle, with the power sold directly into Australia's National Electricity Market.

Construction is expected to start in 2017, subject to financing, with first power being fed into the grid in 2019.

A Heads of Agreement between Queensland Government-owned Powerlink and Genex Power Limited has been signed to progress Stage 2 of the Kidston Hydro-Solar Project, taking the project one step closer to construction.