Following the announcement of Final Investment Decision (FID) at the end of September 2021, the $89 million Finniss Lithium Project in the Northern Territory has commenced construction.

Core Lithium has raised $150 million in financing from institutional investors and shareholders to fully fund the development of the project, which includes a $34 million placement to Ganfeng and a four-year offtake agreement.

“This is more great news for Territorians, because construction means jobs, jobs and more jobs for locals.

“The first three years of this modern mining project are expected to inject more than half a billion dollars into the local economy.

“The Territory Labor Government is delivering on its promise to make the Territory a world-class hub for resources and critical minerals,” Minister for Mining and Industry Nicole Manison said.

The early works at the Grants site will pave the way for major construction to begin later this year, which will be followed by the construction of a Dense Media Separation (DMS) process plant in March 2022.

The DMS process plant is due to be commissioned and the first production of lithium concentrate delivered by the fourth quarter of 2022.

The 1Mtpa process plant will enable Core Lithium to produce high-quality concentrate over the mine’s projected 7 to 10-year life.

Along with the FID, Core Lithium announced that it has awarded the mining services contract to Lucas Total Contract Solutions and the engineering, procurement and construction (EPC) contract for the process plant to Primero Group. You can read more about the FID and contract awards here.

“The Territory is entering a wave of new mining and this is another exciting milestone for Australia’s comeback capital.

“Construction has officially begun on the Finniss Lithium Project, and we will see mining activity begin by the end of this year, with exports to start from 2022.

“This project will provide hundreds of world-class mining jobs for residents in Darwin, Palmerston and the Rural Area, which will also support local business and create new opportunities for Territorians,” Chief Minister Michael Gunner said. 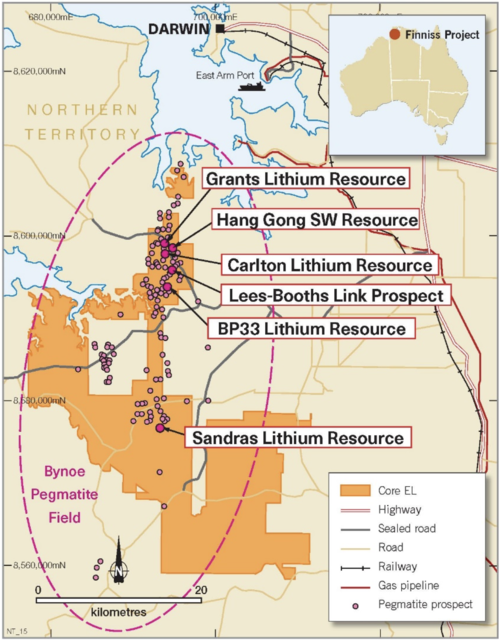 The Finniss Lithium Project is located about 35 kilometres west of Berry Springs on the Cox Peninsula Road and it will feature an open cut and underground mining operation.

The project is also located within 25 kilometres from port, power station, gas, rail and about an hour drive by sealed road to Darwin where workforce will be accommodated as well as to Darwin Port – the nearest Australian port to Asia.

This multi-million-dollar project is anticipated to create 250 local jobs during its construction and operation phases. About 84 per cent of available jobs on the Finniss Lithium Project have already been awarded to locals.

“At a time when Australia is firmly focused on both the generation of renewable resources and future job prospects for the regions, Core is incredibly proud of this milestone we’ve reached in the Northern Territory today.

“This next phase of the Company will be transformational, and we are excited to see construction milestones met at Finniss over the coming 12 months, ahead of first production before the end of 2022.

“We also look forward to engaging the local workforce in the NT, with more than 84 per cent of available jobs at Finniss already appointed to locals,” Core Lithium Managing Director Stephen Biggins said.

Lithium is a vital mineral used in the production of new and emerging technologies such as batteries, electric vehicles, mobile phones, high-definition screen displays, solar panels as well as medical equipment and military technology.

The Finniss Lithium Project has the potential to position the Northern Territory as a “strategically important jurisdiction for the production, processing and manufacturing of critical minerals to the global market”.

Georgiou Group has been awarded a $17 million contract to build Tianqi Lithium’s Australian headquarters. The contract was awarded by MSP Engineering, the head contractor for the multi-million dollar Kwinana lithium processing plant.

Core Lithium has reached Final Investment Decision (FID) on its Finniss Lithium Project in the Northern Territory and is preparing to commence construction on the $89 million mine development.