The Queensland Government has named Australian Unity as the preferred tenderer for the $1.1 billion Herston Quarter project in Brisbane. The redevelopment will transform the former children’s hospital at Herston into a mixed-use precinct for health, residential, commercial and recreational activity.

The preferred proponent bid against fellow shortlisted tenderer Lend Lease, with both parties encouraged to demonstrate their experience, capability and capacity to successfully masterplan, manage and deliver developments of similar size, nature and complexity, including the adaptive reuse of existing heritage buildings.

“The Herston Quarter is an important social infrastructure project for Brisbane and Queensland and we thank the Palaszczuk Government for the opportunity to contribute to the development of a world class health precinct,” said Australian Unity Group Managing Director Rohan Mead,

Australian Unity and the Queensland Government will work together to finalise the contract and project masterplan over the next few months. According to Treasurer Curtis Pitt, this project will be supporting 700 jobs annually during construction.

“This development, over a five-hectare site adjacent to the Royal Brisbane and Women’s Hospital, will provide significant economic development opportunities for Queensland, supporting 700 jobs annually during the 10-year development period and hundreds of jobs annually through operation, as estimated by Australian Unity," said Queensland Treasurer Curtis Pitt. 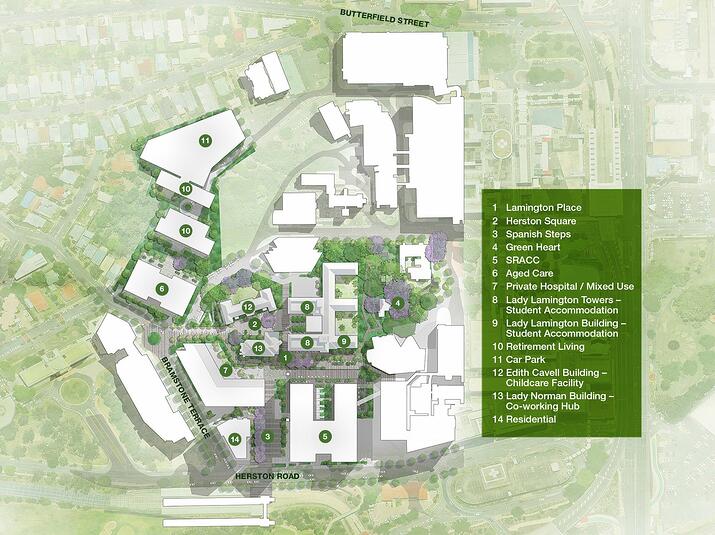 Construction will be done in stages over the next 10 years and works are expected to begin in 2017.

Stage one is set to begin next year and is estimated to be completed by 2020. The first stage will involve:

Stage two of the project is also set to begin in 2017 and is expected to be completed within a 10-year timeframe. This stage will involve:

Keep up to date with this major redevelopment project by subscribing to the PlantMiner newsletter today and start receiving industry news and project updates straight to your inbox.

The State Government is delivering $1.4 billion worth of road infrastructure projects across Central Queensland, which will support up to 1,500 jobs. This pipeline of works will also help in the State’s economic recovery from COVID-19.

Queensland’s $1 billion M1 Varsity Lakes to Tugun Upgrade is another step closer to beginning construction as the first project design is released for public viewing.