The joint venture between Coleman Rail and KBR has been named as the preferred contractor to deliver the second stage of the Shepparton Line Upgrade in Victoria, which will deliver the needed infrastructure to enable VLocity trains to run to Shepparton.

This project will allow VLocity trains to travel to and from Shepparton for the first time, providing improved reliability and making commute by train more comfortable for passengers.

VLocity trains are the newest additions to the V/Line fleet. These trains will feature mobile signal boosters for better phone coverage as well as improved accessibility for commuters with mobility aids or prams.

“The Shepparton Line is a vitally important part of our regional train network, which is why the Victorian Government has invested $356 million to the first two stages of this major upgrade.

“It will give Shepparton passengers the modern and reliable trains they’ve been calling for and provide more services more often,” Minister for Transport Infrastructure Jacinta Allan said. 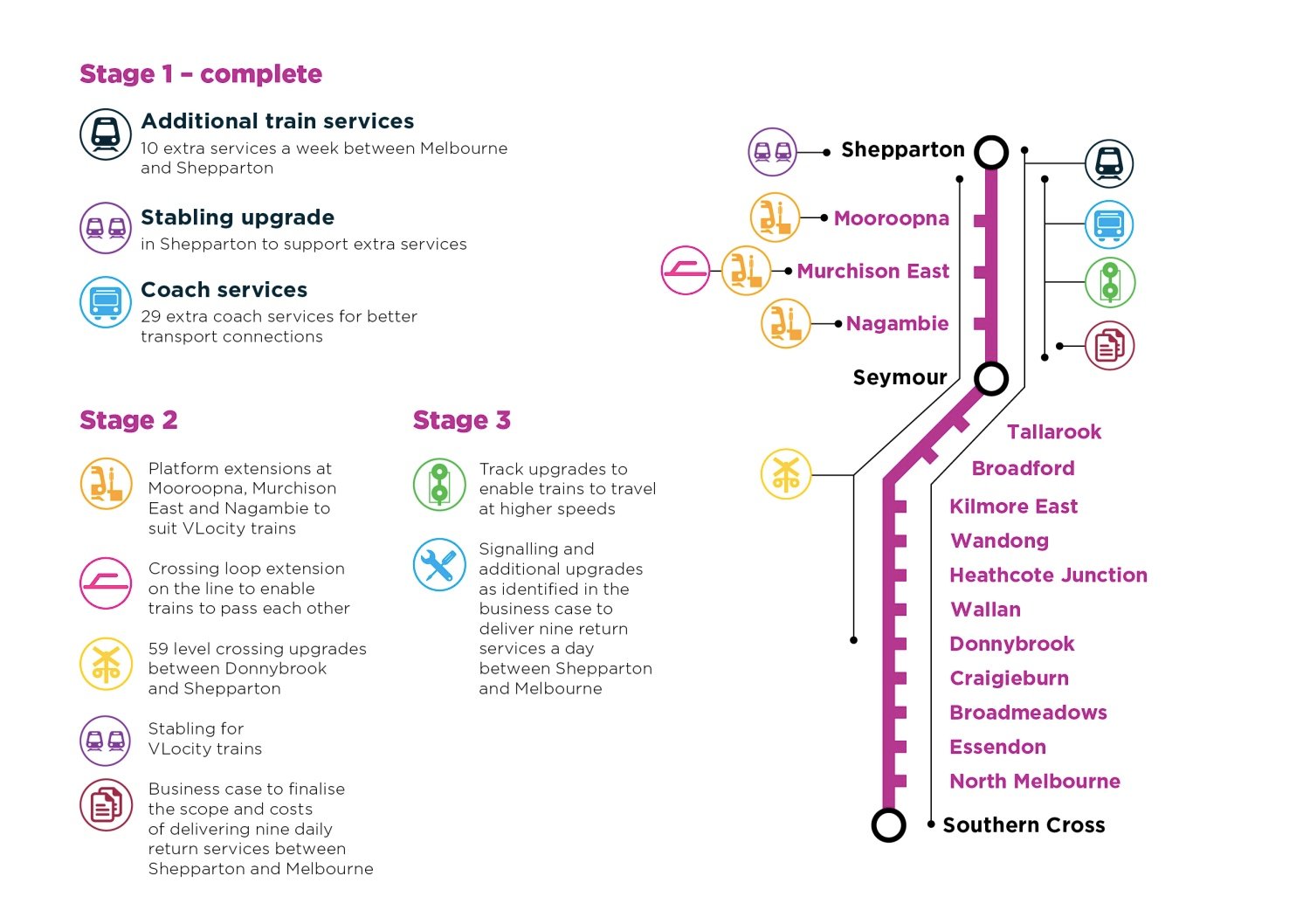 Stage 2 of the Shepparton Line Upgrade will include:

In addition, community consultation is underway and Shepparton locals are encouraged to have their say on the new stabling facility that will be delivered as part of the Shepparton Line Upgrade. For those interested to provide feedback, you can do so by completing an online survey or by booking an appointment to speak with the project team through this page.

Major construction is anticipated to commence later this year and is due to be completed by late 2022.

“This upgrade is giving Shepparton residents access to modern transport infrastructure and making it easier than ever to enjoy the comfort of travelling by train.

“Drivers will also see the benefits of the level crossing upgrades, which will make crossing the line much safer for motorists,” Member for Northern Victoria Mark Gepp said.

The Shepparton Line Upgrade is being delivered in three stages, with the first stage already complete. Stage 3 of the project will include track upgrades to allow trains to travel up to 130km/h, signalling and additional upgrades to allow for nine return services daily between Shepparton and Melbourne.

Construction on the $518 million Ballarat Line Upgrade is on track with the LendLease, Coleman Rail and SMEC consortium named as the preferred bidder to build the project.

Victoria’s Donnybrook and Wallan train stations are set to have upgrade works done as part of the $356 million Shepparton Corridor Upgrade project, which will be supporting the growing communities along the route.

Approximately $208 million has been invested by the Australian Government for the delivery of the Shepparton Bypass Stage 1 in Victoria’s Goulburn Valley - a project that will remove freight and through traffic from the Shepparton CBD.