Construction on the new North Melbourne Station has commenced. Formerly known as Arden Station, it is one of the five new stations to be built as part of the $11 billion Metro Tunnel project in Victoria. 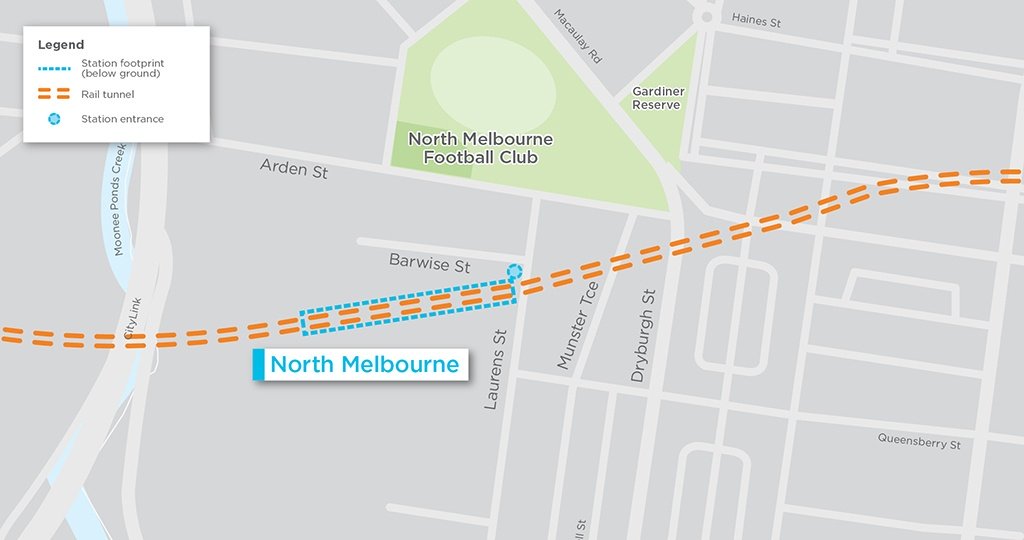 The new station will include a cafe as well as a terrace for outdoor dining. North Melbourne Station will also feature public seating, garden beds and lawn areas that can be used and enjoyed as a gathering place for locals and passengers.

The North Melbourne Station project will also involve upgrading Laurens Street to make it more pedestrian and public-transport-oriented while Barwise Street is going to be upgraded into a greener and more pedestrian-friendly laneway - with access to the existing properties are maintained.

Workers will begin preparing the site this week for the construction of underground walls that will be up to 30 metres deep as well as ensure the safe excavation of approximately 330,000 tonnes of rock and soil from the site.

The new North Melbourne Station is going to be built 20 metres below the ground and it will be able to accommodate platforms that are over 225 metres long.

Construction of North Melbourne Station is expected to support up to 300 jobs. The new station is projected to be completed by the time the Metro Tunnel is set to open in 2025.

Over the coming weeks, works will also ramp up on new underground stations at Parkville, Anzac and at two CBD locations. This will include the construction of an $18 million manufacturing facility at Deer Park that will produce more than 50,000 concrete segments which will be used to line Metro Tunnel’s two nine-kilometre tunnels.

Once the manufacturing facility is up and operational - expected later in 2018 - up to 80 new jobs are going to be supported which include 50 jobs for ex-auto workers.

Two giant tunnel boring machines (TBM) are going to be launched at the site of the new North Melbourne Station which will dig deep underground and install the concrete segments from the Deer Park facility, creating a permanent watertight lining for the future tunnels.

The multi-billion dollar Metro Tunnel project is expected to support up to 7,000 jobs for the State, including up to 800 opportunities for apprentices, trainees and cadets.

The new North Melbourne Station - as well as the other four stations that are going to be built for the Metro Tunnel - is going to be delivered by the Cross Yarra Partnership which is a joint venture between Lendlease Engineering, John Holland, Bouygues Construction and Capella Capital.

Stay up to date with the latest Metro Tunnel project updates as well as other industry news by subscribing to Felix Project News today.

Ballarat Line Upgrade to include new train station at Cobblebank

A new train station is going to be built at Cobblebank in Victoria as part of the more than half a billion dollar Ballarat Line Upgrade project, and the Victorian Government has released the designs for the trains station that will be able to service Melbourne’s booming outer western suburbs.

As part of the $15 billion investment to upgrade the Pakenham line in Victoria, more works are set to get underway under the Pakenham Level Crossing Removal Project following the release of designs for the new Pakenham and East Pakenham stations.