Works to upgrade the Gippsland Line in Victoria will soon commence following the announcement that VicConnect has been awarded the contract to deliver rail improvements between Pakenham and Traralgon.

VicConnect is a consortium comprised of UGL Limited, Decmil and Arup.

“This investment in the Gippsland Line is all about improving train services for people in the region, now and into the future.

“This major package of works Gippsland Line Upgrade will deliver even more benefits for passengers and local industry and is yet another example of our record $110 billion nationwide infrastructure plan getting people home sooner and safer while driving our economic recovery,” Deputy Prime Minister and Minister for Infrastructure, Transport and Regional Development Michael McCormack said.

The Gippsland Line Upgrade will include:

Morwell Station's second platform has been redesigned after consultation with the Latrobe City Council as well as the local community to improve connectivity to the bus interchange.

“These upgrades are absolutely vital to keep the communities of Gippsland connected to each other and to Melbourne.

“We've seen the benefits of this investment for local suppliers and local employment – there has never been a better time for this investment to help the local economic recovery from COVID-19,” Federal Member for Gippsland Darren Chester said. 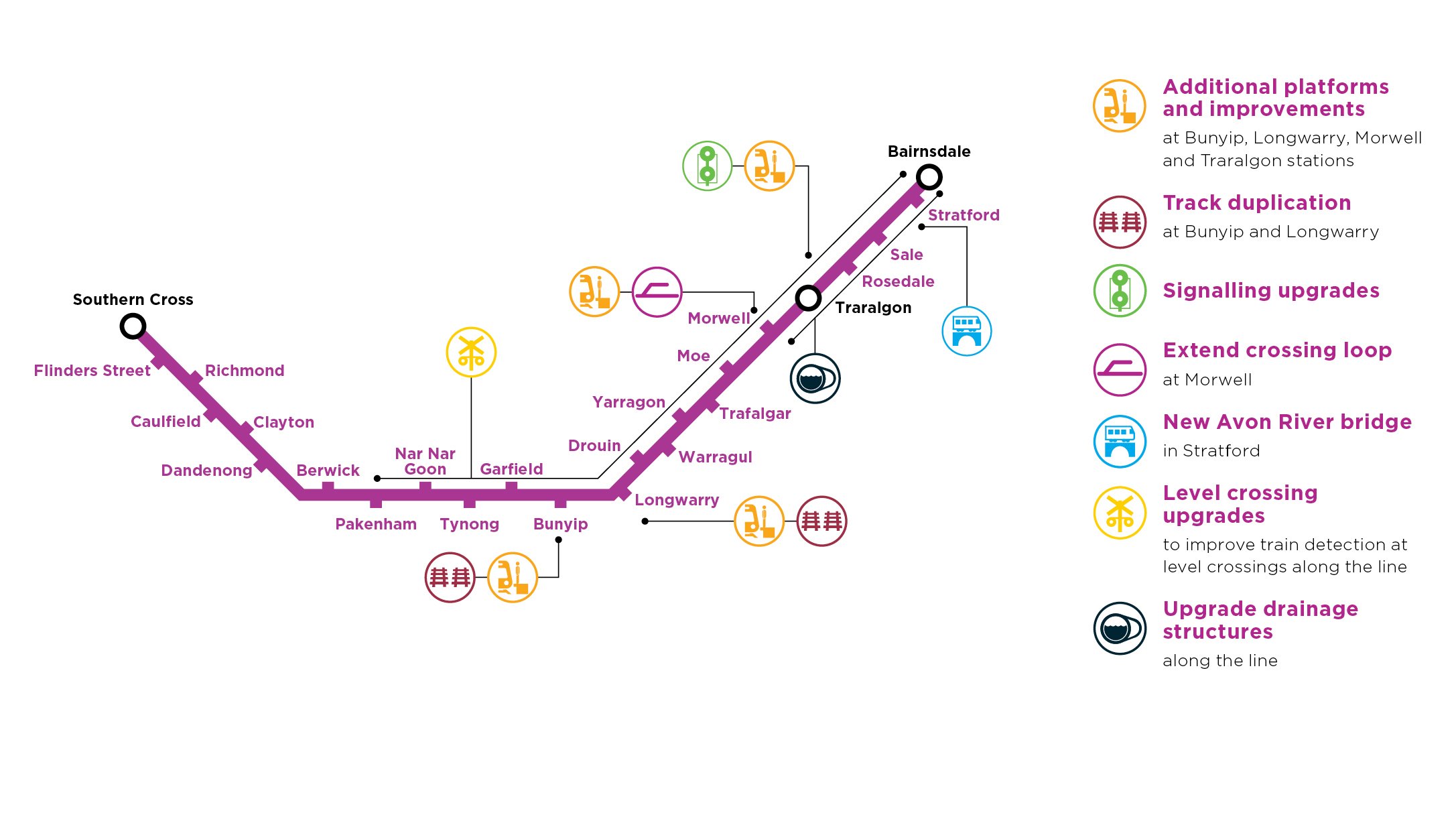 Early works – including signalling and track inspections – have already commenced while site investigations and surveying will continue in the coming weeks at Bunyip, Longwarry, Morwell and Traralgon.

“We're delighted that the contract for this important project has been awarded to VicConnect. We believe that the alliance with UGL and Arup to successfully deliver the Gippsland Line Upgrade will mark the beginning of a long and fruitful association,” Decmil CEO Dickie Dique said.

For this significant project, VicConnect will be prioritising engagement with local companies as well as workers.

“With more than 25 local contractors and suppliers taking part in construction of the new Avon River Bridge, we're putting local workers at the heart of this project.

“This larger package of works will deliver even more benefits for the local economy – and will mean the Gippsland Line Upgrade has created more than 500 vital local jobs for Eastern Victoria,” Minister for Transport Infrastructure Jacinta Allan said.

In addition, VicConnect will also be hosting industry briefing sessions over the coming months for local contractors and suppliers who want to get involved in the delivery of the Gippsland Line Upgrade.

“Our contractors will open a project office in Morwell later this year – making sure we can work closely with the local community throughout construction and get Gippsland businesses involved,” Victorian Member for Eastern Victoria Harriet Shing said.

The Gippsland Line Upgrade is being delivered through the Regional Rail Revival program, which aims to upgrade every regional passenger rail line in the State as well as creating up to 3,000 jobs.

Major construction on Victoria’s Warrnambool Line and Geelong Line upgrades is anticipated to commence by mid-2020 with the design and construction contract to deliver major components for the projects awarded to Downer.

Victoria’s Gippsland Line Upgrade reaches a new milestone with the announcement of a preferred contractor to deliver major works between Pakenham and Traralgon.