Planning for the third and final stage of the M1 (Pacific Motorway) North upgrade in Queensland is progressing as consultation with motorists and residents commences.

Stage 3 of the M1 North upgrade will cover the section of the motorway between Daisy Hill and Logan Motorway. Works on the business case for this stage is already underway and feedback on the concept design is being sought.

“The plans we’re putting out for consultation consider and balance the needs of motorists, public and active transport as well as amenity for locals.

“We expect this upgrade to cut the average morning peak travel time to Eight Mile Plains from the Hyperdome by almost half – that’s good news in my book.

“This project also represents one of the most significant urban renewal opportunities for our community since its settlement in the 70’s, with better roads and public transport, we can expect to see more new and affordable housing options feature around the new busway and cycleway connections,” QLD Energy Minister and Member for Springwood Mick de Brenni said.

Consultation will run from 7 November 2022 to the 27 November 2022. Drop-in sessions will also be held and the community is encouraged to pay a visit to ask questions and get more information on the project. Details for the consultation can be found here.

“I welcome the call for community involvement in this planning, because that will help the best outcomes possible for locals.

“I encourage anyone who loves, or drives, in the area to have a look at the plans online or visit a drop-in session and provide feedback,” QLD Attorney General and Member for Waterford Shannon Fentiman said.

The third stage will include:

The proposed upgrade will also include a nine-kilometre cycleway extension that will provide a “healthy and active way to travel between Brisbane and Logan”.

“Integral to this project is the active transport improvements that are built into the design, which will see the veloway extended to 30 kilometres.

“Connecting Brisbane to the Logan Motorway via the Veloway is an important link in our vision of having a dedicated active transport corridor from Brisbane to the New South Wales border.

“This package rounds out our nearly $2 billion program of works on the M1 to the North, so I encourage local drivers and commuters alike to check out the plans and have their say,” QLD Transport and Main Roads Minister Mark Bailey said.

This project is estimated to support up to 550 jobs during its construction phase, delivering flow-on benefits for the local economy.

The Australian and Queensland Governments have jointly funded $1 billion – on a 50:50 basis – to deliver the business case for Stage 3 of the M1 North upgrade.

The business case is expected to be completed in mid-2023.

“This business case process is such an important step in delivering better, safer roads for Logan locals.

“The works already completed further north have made a big difference for morning commuters, and this is the next step in alleviating that bottleneck around the Hyperdome.

“Get involved and have a say to shape the future of our M1,” State Member for Macalister Melissa McMahon said. 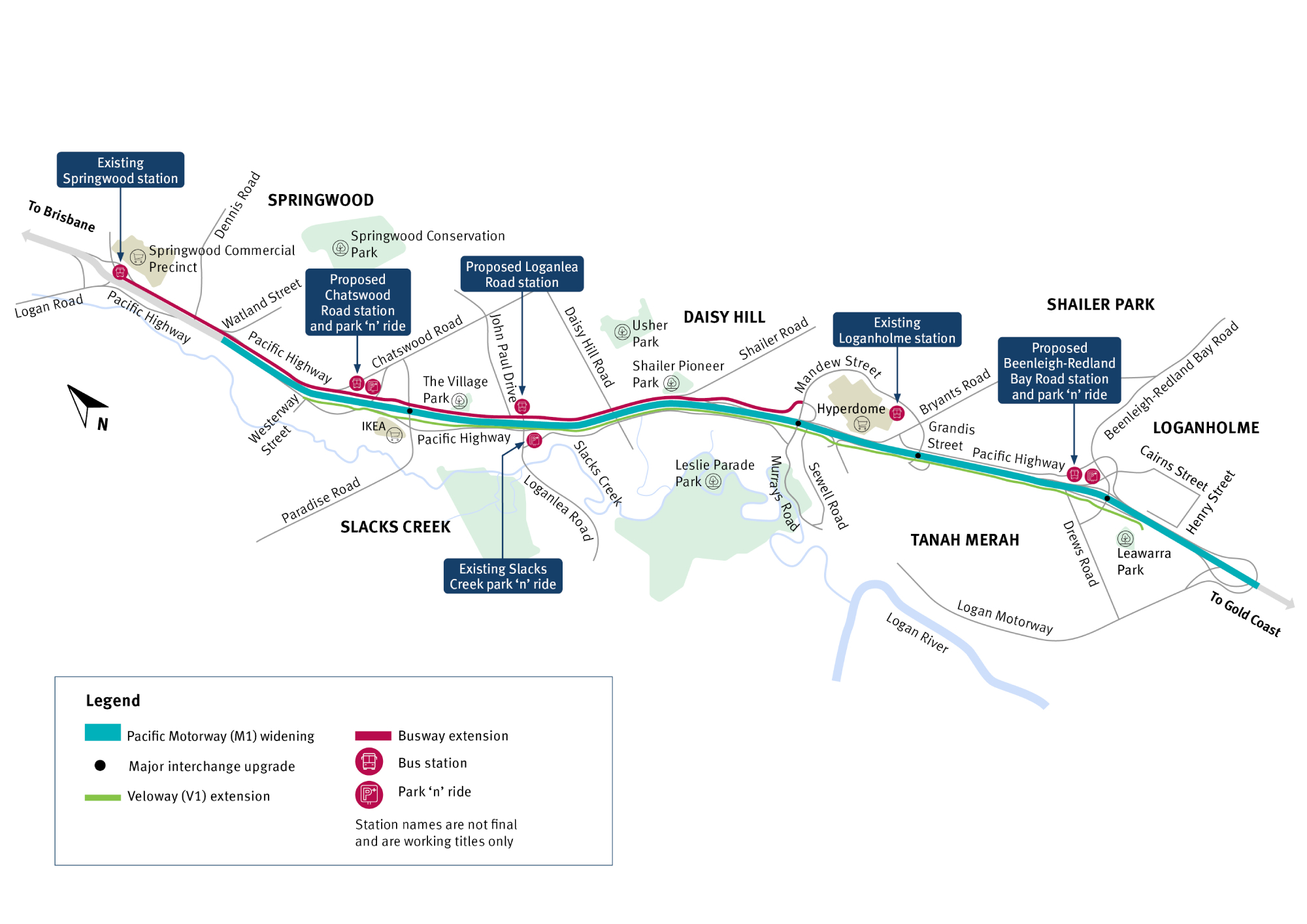 Consultation with property owners who are directly impacted by the project is continuing as planning works progress on Stage 3. Feedback from the community will be taken into consideration to ensure that future upgrades on the M1 can cater to the growing population and traffic volumes now and into the future.

“This M1 upgrade will mean people in my community will be able to get home quicker, but most importantly safer.

“I would encourage anyone who wants to have a say on this important infrastructure project do so, as it will help deliver the best outcomes for everyone,” Member for Moreton Graham Perrett said.

The entire M1 (Pacific Motorway) North upgrade program is delivered in three stages, with the first stage – the M1/M3 Gateway Merge upgrade – already completed in May 2020 and Stage 2 – the $750 million Eight Mile Plains to Daisy Hill upgrade – currently under construction.

Stage 2 works include widening the motorway as well as extending the South East Busway to Springwood. A new bus station and park ‘n’ ride at Rochdale is also being built along with the continuation of the M1 cycleway.

“Construction is progressing well on the $750 million upgrade between Eight Mile Plains to Daisy Hill and stage three to Logan Motorway is the missing link.

“Before we get started on the next stage, it’s important that we get a better sense of what locals think about the project and what they hope it will deliver.

“I encourage anyone in our community with a view to get involved and provide feedback. This will help the Department of Transport and Main Roads to incorporate local views in the final phase of planning,” Federal Treasurer and Member for Rankin Jim Chalmers said.

Works are progressing on two new northbound bridges across Mudgeeraba Creek on the M1 Pacific Motorway in Queensland, with the installation of 400 new bridge decks now underway.

Another Pacific Motorway M1 upgrade gets underway in the Gold Coast

More Queensland jobs are set to be supported as works begin on another Pacific Motorway M1 upgrade in the Gold Coast, which is part of the $2.3 billion M1 pipeline of upgrades.