Another Bruce Highway upgrade in Queensland is one step closer to commencing works as contracts are being advertised for the construction of the $662.5 million upgrade project between Caboolture-Bribie Island Road and Steve Irwin Way (Exit 163).

“The Expression of Interest process is the next major step in this project, which will future-proof one of Australia’s most significant freight corridors,” Deputy Prime Minister and Minister for Infrastructure, Transport and Regional Development Michael McCormack said.

According to Queensland Transport and Main Roads Minister Mark Bailey, this project is just one of the major upgrades to the Bruce Highway that has secured funding and it is expected to support up to 700 jobs.

“The upgrade between Caloundra Road and Sunshine Motorway has really started to take shape and has transformed that key turn-off of the Sunshine Coast.

“Later this year, construction will start on the final major upgrade between Cooroy and Curra, as well as on the Mons Road and Maroochydore Road interchanges.

“Together, these projects worth more than two billion dollars and are set to transform about 140kms of the Bruce Highway from Caboolture to Curra in the coming years, keeping pace with growth and providing a quicker trip to the beach for visitors to the region,” Mr Bailey said. 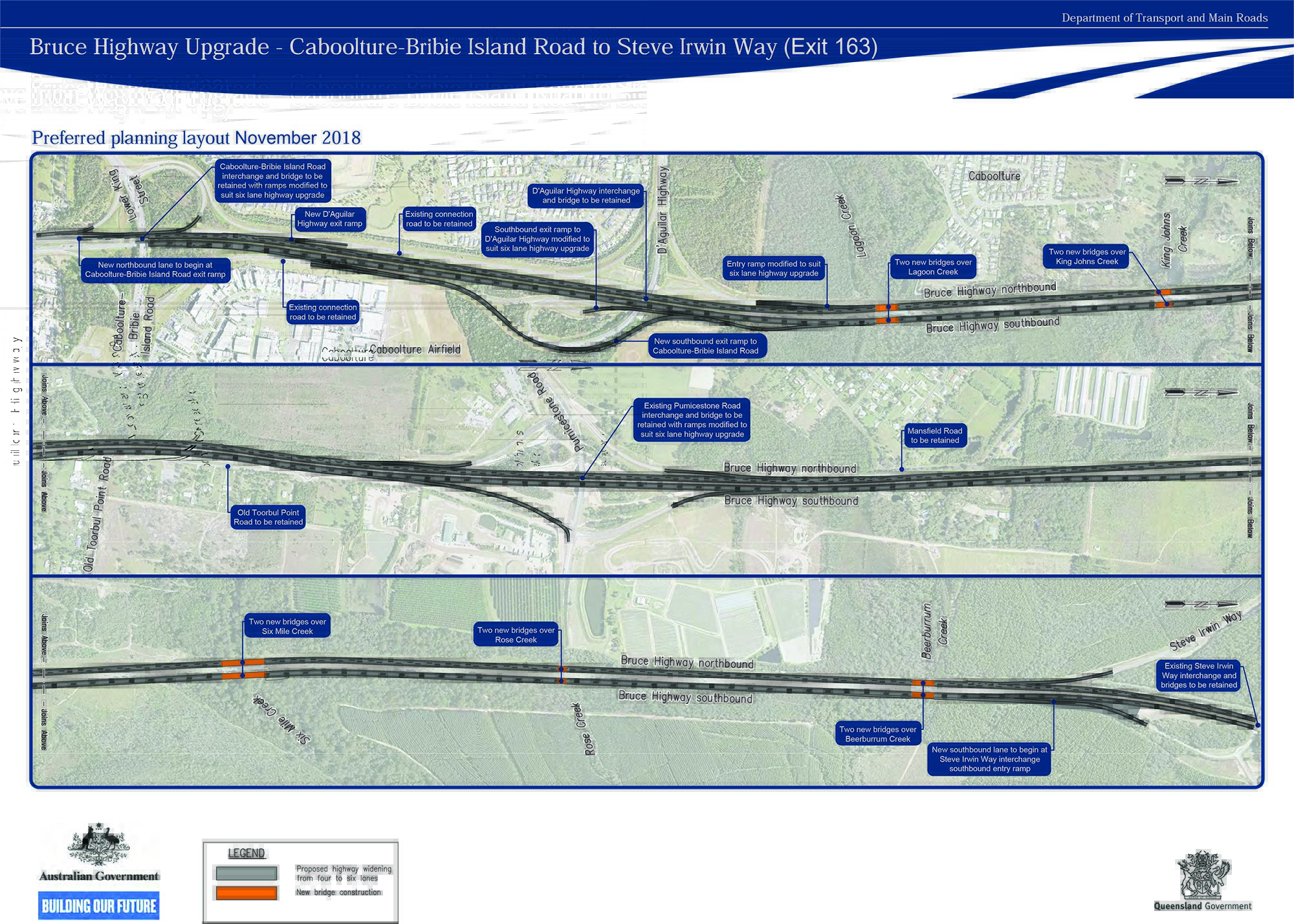 “Improving flood immunity on the Bruce is critical to supporting our freight network and maintaining access to our communities during severe weather events,” Federal Member for Longman Terry Young said.

In addition, this major Bruce Highway project will also include the construction of 10 new three-lane bridges at Lagoon Creek, King Johns Creek, Six Mile Creek, Rose Creek and Beerburrum Creek - all that could withstand a 1-in-100-year flood.

“Reducing the highway’s potential to be cut off during major flood events is a key part of the design in this upgrade.

“These works will not only improve the highway’s capacity and flood immunity, but also increase the shoulder width to allow vehicles to safely pull over in case of a crash or emergency while allowing traffic to continue to flow,” Federal Member for Fisher Andrew Wallace said.

This $662.5 million project is jointly funded by the Australian and Queensland Governments on an 80/20 basis, with each contributing $530 million and $132.5 million respectively.

This upgrade is being delivered as part of the Bruce Highway Upgrade Program (BHUP), which is set to deliver approximately $12.6 billion worth of works over a 15-year period.

Following the beginning of the Expressions of Interest process earlier this year, early works are now underway to prepare for major construction in late 2020 on the $662.5 million Bruce Highway Upgrade between Caboolture and the Sunshine Coast.

The Victorian Government has given the green light for a new $662 million wind farm near Horsham in Victoria's west.

Construction on the $662.5 million Bruce Highway upgrade between Caboolture-Bribie Island Road and Stever Irwin Way (Exit 163) in Queensland is due to begin before Christmas, bringing a much needed boost to the Sunshine Coast’s economic recovery.