Following the announcement of the Mineral Lease grant from the State Government, Core Lithium Ltd has awarded three major contracts for works at its wholly-owned Finniss Lithium Project near Darwin in the Northern Territory.

“These key contract roles are crucial for the success of the Finniss Lithium Project, so we did not make our decisions on who should be awarded these packages of work lightly,” Core Lithium Managing Director Stephen Biggins said.

Primero Group has been awarded the contract for engineering, procurement and construction (EPC) as well as front-end engineering and design (FEED) services. FEED study on the project has already commenced to help improve estimates for the EPC works on the 1Mtpa processing plant and associated infrastructure at the Finniss mine.

Core Lithium has also appointed Qube Bulk Pty Ltd as the preferred haulage and transport solutions provider for the project.

In addition, Lucas Total Contract Solutions (Lucas TCS) has been awarded the contract to provide mining services at the Finniss Lithium Project.

To finalise the terms for a cost-effective and time-efficient solution for the project, Core Lithium will be working closely with Qube and Lucas TCS for this.

“We believe we have selected the best contractors for the respective contracts out a field of worthy contractors, and look forward to working with Primero, Lucas TCS and Qube once the contracts have been finalised and the next phases of work at Finniss get underway.

“Final award of these contracts will follow the completion and release of the Definitive Feasibility Study and financing of the Finniss Project, which should see Core on-track for first production at Finniss by the end of the year,” Mr Biggins said. 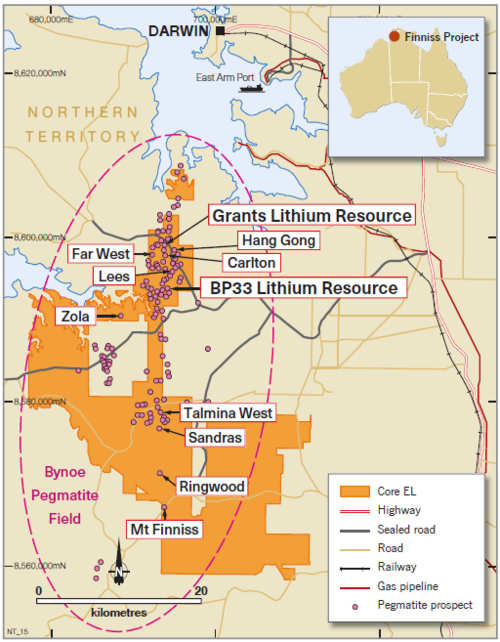 Core Lithium was granted the Mineral Lease earlier this month. This is the first lithium-focused Mineral Lease granted in the State.

The Finniss Lithium Project is located approximately 36 kilometres from Berry Springs and 90 kilometres from Darwin. As stated by Core Lithium on a previous media release, lithium ore from the Finniss mine is set to be process on-site and then transported by road to be exported at Darwin Port.

This project is expected to create up to 150 jobs during the construction phase, and a further 90 jobs once the mine is operational.

Talison Lithium marks a new major milestone on its $516 million expansion of the Greenbushes mine in Western Australia, with the State Environmental Protection Authority (EPA) giving the approval for development.

A $400 million lithium plant in Kwinana has been proposed by Chinese company Tianqi Lithium – a major stakeholder of Talison Lithium. Tianqi is now seeking development assessment panel approval for the processing facility from the Western Australian Government.