The $50 million Wanneroo Road and Joondalup Drive intersection upgrade in Western Australia has marked a major milestone, with the contract to deliver the project awarded to CIMIC Group member CPB Contractors.

The company was previously invited to bid for the project along with three other builders, including BMD Constructions, Georgiou Group and Decmil Group’s subsidiary Cut & Fill.

In June of this year, the scope of the project was modified to include upgrades to three nearby intersections. The Wanneroo Road and Joondalup Drive intersection upgrade scope of works will now include:

Once the upgrade is completed, it will improve connectivity, safety and travel times for all road users passing through the route. 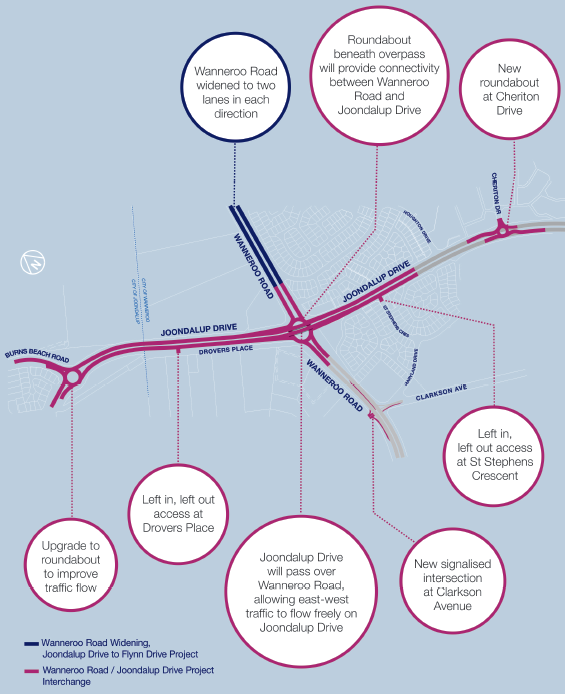 In a statement released in June, Transport Minister Rita Saffioti said: “ The Wanneroo Road and Joondalup Drive interchange project is required to address projected levels of congestion that will arise due to residential and commercial expansion in Perth’s northern corridor.”

“It will complement other projects on Wanneroo Road to cater for long-term traffic demands and provide more reliable access, which will increase the attractiveness of Perth’s north-west corridor as an industrial centre, supporting the growth of local jobs and services,” the Minister added.

CPB Contractors is set to commence early works this month to prepare the site for major construction activities projected to begin in September 2018.

Main Roads WA and CPB Contractors will be working closely together during the 18-month delivery period of the Wanneroo Road and Joondalup Drive intersection upgrade.

This project is funded by the Australian and Western Australian Governments as part of the $2.3 billion investment for roads and rail infrastructure - which was announced in 2017.

A new $365 million managing contractor contract has been awarded to Lendlease Building Contractors for the delivery of the first tranche of works at HMAS Stirling and the Australian Maritime Complex in Western Australia.

Western Australia's $70 million Reid Highway widening project - between Altone Road and West Swan Road - marks a new milestone with the release of the design concept back in April 2018 and Expressions of Interest have been called for the project’s design and construction contract.

A $40 million drill and blast contract has been awarded to NRW Holding’s wholly-owned subsidiary Action Drill and Blast Pty Ltd (ADB) for services on Newcrest Mining’s Telfer gold mine in Western Australia.