Hassell has unveiled the design for a $38.5 million redevelopment on the Geelong Performing Arts Centre. Major upgrades will be done to the building’s façade and facilities and position the centres as one of the leading cultural venues in Victoria.

Upgrade works focus on a new entranceway with an impressive contemporary façade that improves the venue’s accessibility and amenity.

According to Hassell Principal and Head of Design Mark Loughnan, the redevelopment on the performing arts centre is proof that Geelong is paving the way in regional arts.

“The expansion will also include rehearsal facilities, new dance studios and provision for creative industries offices. As the only state-owned arts centre outside Melbourne, Geelong Performing Arts Centre will not only be a landmark destination it will also service the needs of the growing creative and cultural community.” – Mr Mark Loughnan 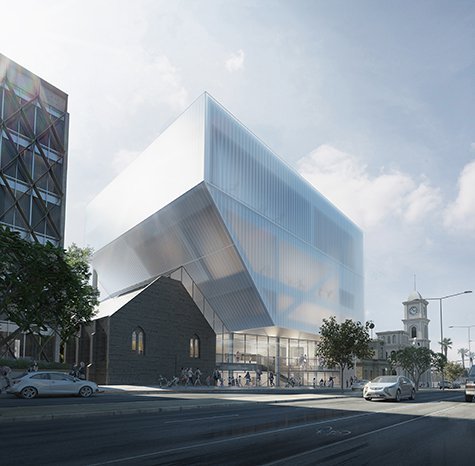 Construction on the Geelong Performing Arts Centre will begin in mid-2017 and is expected to be completed by late 2018.

Stay up to date with the latest industry news and project updates by subscribing to the PlantMiner newsletter.

Works to upgrade around 10.5 kilometres of the Bruce Highway between Traveston and Woondum came a step closer today with the successful tenderer for Cooroy to Curra Section C finally announced.

The $386.5 million Great Eastern Highway Bypass Interchanges project in Western Australia is now under construction and is a step closer to providing improved connectivity and safety as well as relieve congestion in Perth’s Eastern Metropolitan region.

The Australian Government is supporting the development of the $4.3 billion Perdaman Urea Project in Western Australia through a $255 million funding investment from the Northern Australia Infrastructure Facility (NAIF).