Works on a critical new intersection will commence soon as part of the first phase of the $220.2 million New Dubbo Bridge project on the Newell Highway in New South Wales.

“This work now underway will make a major difference to the day-to-day lives of commuters, by easing congestion and ensuring reliable access through Dubbo at all times, including during flood events.

“Getting work underway on infrastructure projects like this is a visible indication of our Government improving access and road safety for commuters where it’s needed the most,” Federal Infrastructure, Transport, Regional Development and Local Government Minister Catherine King said.

The contractor will be delivering the vital intersection upgrade, which will include realigning and rebuilding Darling Street to connect it to Brisbane Street to allow for safer and more efficient movement of heavy vehicles in the area.

On the other hand, Caporn Piling NSW Pty Ltd has been awarded the contract for test piling in the floodplain. The test piling works will commence in October upon the completion of planning and site mobilisation. Test piling is going to be part of the final bridge structure and is a key component in the delivery of the project.

“The start of work on the new intersection of Brisbane and Darling streets is an exciting milestone for the New Dubbo Bridge project.

“The project represents a major investment in western NSW and will support around 290 direct and 1,200 indirect jobs during the construction phase.

“Once completed, the New Dubbo Bridge will be a key link in the western NSW road network, improving traffic efficiency along the Newell Highway, reducing traffic congestion for locals and commuters, and improving access across the Macquarie River flood plain during flood events,” NSW Minister for Regional Transport and Roads Sam Farraway said.

Weather permitting, works are expected to take about five months to complete. Lane closures as well as reduced speed limits will be implemented while works are being carried out.

A detour is going to be placed while access to the northern end of Darling Street at the intersection with River Street is closed to traffic.

“Today marks the start of a significant phase for the New Dubbo Bridge project, ahead of the awarding of the main contract before the end of the year.

“There’s no doubt this project has garnered a lot of community interest, and it’s also been the subject of unprecedented consultation.

“This project will truly be a game-changer for Dubbo, easing congestion for locals and highway travellers alike, and bolstering the connection between east and west during a flood,” State Member for Dubbo Dugald Saunders said.

Plans are currently being finalised for the Thompson Street and Mitchell Highway intersection upgrade. Works on this section of the project is due to commence by the end of this year. 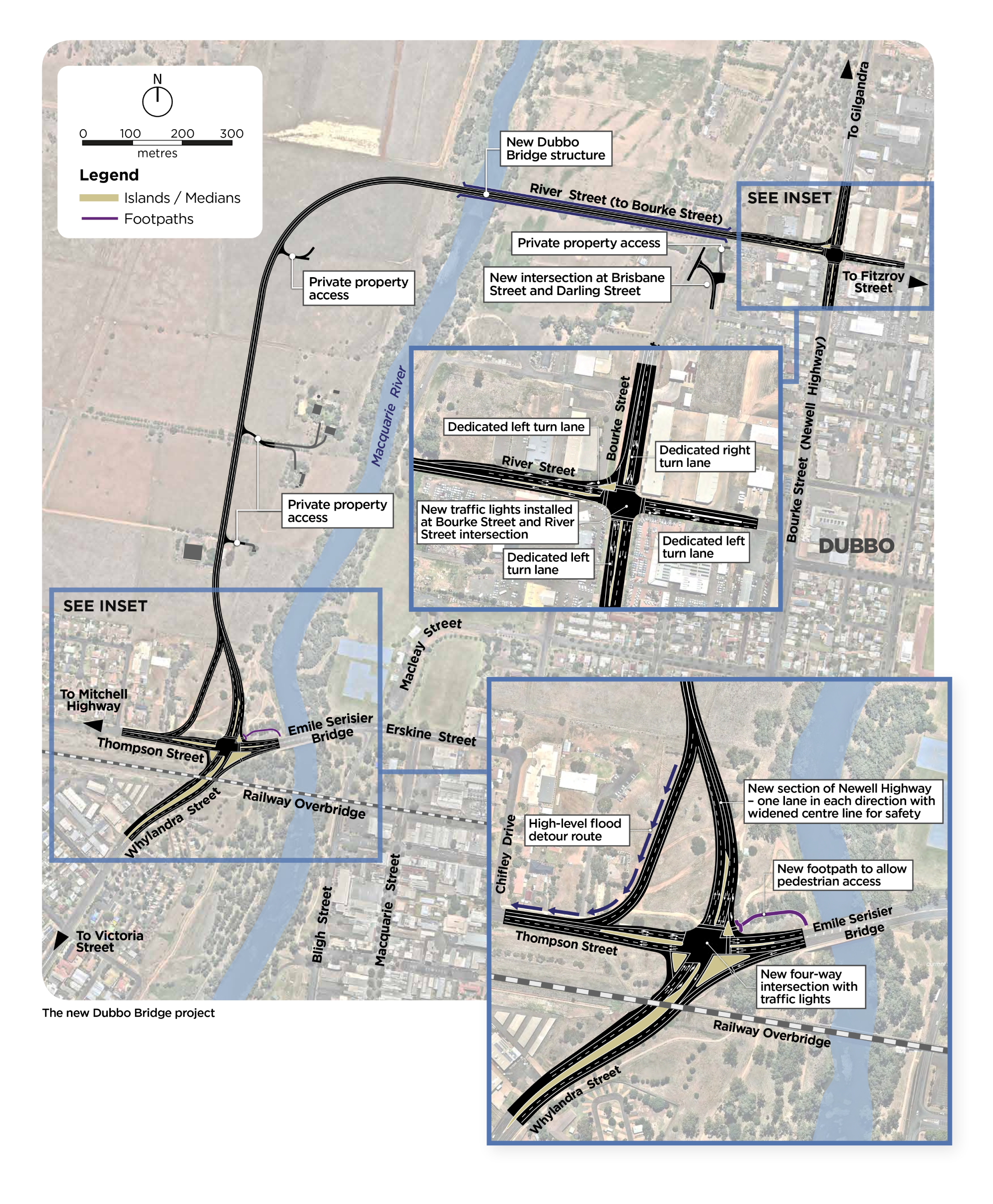 The multi-million-dollar project will deliver a 660-metre bridge that will link the western side of the Macquarie River to River Street, travelling over the floodplain west of the river. The project will also include:

Major construction activities to deliver the New Dubbo Bridge project are scheduled to begin in early 2023.

This $220.2 million project is jointly funded by the Australian and New South Wales Governments on an 80:20 basis.

A new bridge over the Macquarie River in Dubbo, New South Wales is closer to beginning construction as the $220 million project prepares to call tenders for the lead construction contractor.

The $220 million New Dubbo Bridge project in New South Wales has reached a new milestone with the award of a construction contract for early works.

The second South Australian Health and Medical Research Institute building (SAHMRI 2) marks a new milestone, with the release of the design for the development. This takes the project - which is part of Adelaide’s $3.6 billion BioMed precinct - one step closer to construction.