The more than $1 billion Gold Coast Light Rail Stage 3 project in Queensland is progressing well with an agreement signed to get early works started.

Under this agreement, GoldlinQ and John Holland will be undertaking detailed construction planning as well as identifying and inspecting underground services. The two companies will also begin establishing site presence across the 6.7-kilometre corridor.

Delivering major infrastructure projects, such as the Gold Coast Light Rail, are being fast tracked towards construction to aid in the State’s COVID-19 Economic Recovery Plan.

“Building new infrastructure is vital to creating jobs on the Gold Coast.

“We’re working hard to bring forward construction on as many projects as possible to rebuild our economy and create jobs.

“We’ll continue to invest in transport on the Gold Coast to take more cars off the road and cater for growth in the future,” Premier Annastacia Palaszczuk said.

Not only will this project deliver vital infrastructure, but it will also create “good quality construction jobs on the Gold Coast”.

According to Queensland Transport and Main Roads Minister Mark Bailey, the $1 billion Gold Coast Light Rail project will generate jobs and majority of wages and payments to workers as well as suppliers will be a welcome boost to the local and regional economy.

“We will ensure that this investment represents value for money for Queenslanders, including through more training to help build our future workforce, and better safety on our construction sites.

“Building the next stage of light rail presents opportunities over the next few years for local contractors, workers and suppliers on the Gold Coast.

“Previous stages of the light rail created significant employment opportunities, with 90 percent of workers on Stage 1 and Stage 2 coming from the Gold Coast and surrounding regions,” Minister Bailey said.

The project team from John Holland will be engaging directly with the community and businesses over the next six weeks to ensure that they stay informed prior to construction and during the delivery of Stage 3 works.

John Holland will also host a Local Industry Forum in September where they will present upcoming work packages to potential local suppliers and answer questions as well.

To date, many local suppliers and workers have already registered their interest in getting involved with project delivery and they are “eager to be part of this important project”.

“This project will be built by locals and will contribute significantly to the Gold Coast economy which is vitally important at this time.

“We understand the importance of working with the community throughout delivery, and the Stage 3 project team is committed to ongoing communication and minimising impacts to residents, businesses and motorists as much as possible.

“We will also be working with businesses along the Stage 3 route prior to major construction starting to ensure they are aware of the construction process and project opportunities available,” GoldlinQ Chairman John Witheriff said. 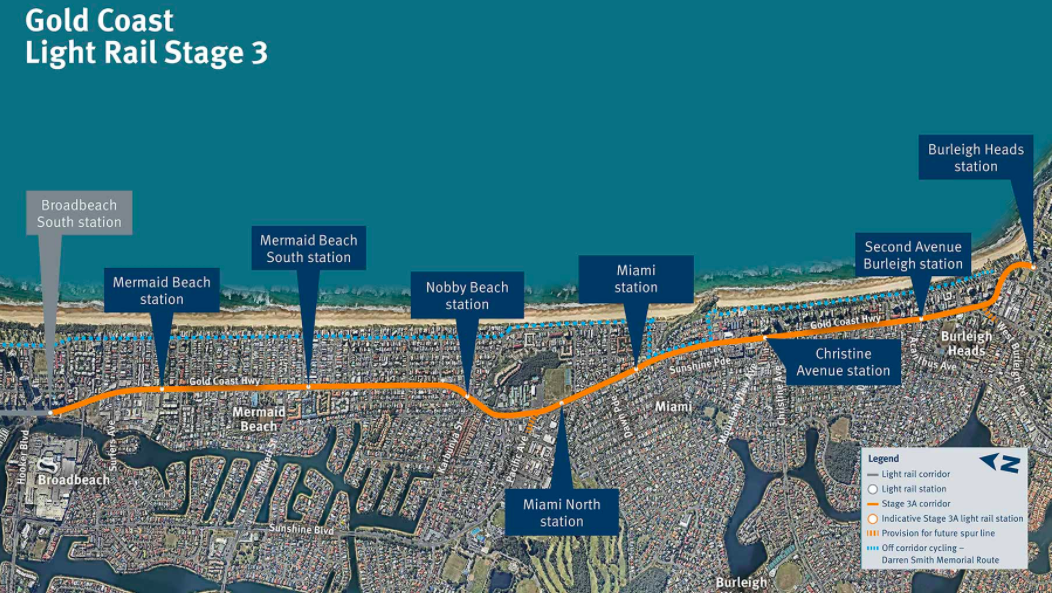 Other works include upgrading and expanding the existing depot and stabling facility, building new light rail-bus connections at Burleigh Heads and Miami, and delivery of associated works and improvements such as signalised traffic intersections and upgrades, new signalised pedestrian crossings and upgraded pedestrian and cycle facilities.

Approximately 760 jobs are set to be supported through the construction of Stage 3.

“We know infrastructure drives the creation of both direct and indirect jobs - and this could not be more important right now for the Australian economy.

“We are committed to supporting local businesses and the wider community throughout construction. We will work with businesses in the project area to minimise construction impacts where possible, and implement initiatives encouraging the community and our workforce to shop locally,” John Holland Executive General Manager - Infrastructure Andrew English said.

The $1.044 billion project is jointly funded by the Australian and Queensland Governments as well as the City of Gold Coast, each contributing $395.6 million, $538.3 million and $91.5 million respectively.

“The light rail corridor – from Helensvale all the way to Coolangatta – is seen as our public transport spine. From that, we will link rapid public transport connections both east and west.

“Studies are now underway into these east-west connectors which may involve hydro buses, electric buses and even automated transport modes including driverless systems.

“Our long-term planning for reliable public transport must include the state and federal governments so I’m delighted that early work on Stage 3 underground works is about to start,” Gold Coast Mayor Tom Tate said.

In addition, planning is now underway for the Gold Coast Light Rail Stage 4 that will deliver a 13-kilometres extension south of Stage 3, linking Burleigh Head to Coolangatta via the Gold Coast Airport.

Some key features of Stage 4 include an improved Palm Beach Avenue precinct, improved connectivity to the M1, active transport options and a beachfront oceanway path.

An interactive consultation website has been launched for Stage 4 where locals can learn more about the project and submit their feedback. You can have our say on Stage 4 of the Gold Coast Light Rail project here.

Congratulations to Brookfield Multiplex for winning the Jewel resort project on the Gold Coast. This architectural icon in the making will be funded by Dalian Wanda group, owned by China's richest man Wang Jianlin, and its joint venture partner Ridong. Brookfield Multiplex compete with two other consortiums - Grocon with China State Construction No.8 and CIMIC with China State Construction No.1.

Construction starts on $1b Jewel development on the Gold Coast

Construction has now started on a $1 billion hotel development on the Gold Coast, which will provide a significant boost to the city’s high-end tourism market and support more than 2,700 jobs during construction.

$1bn development on the Gold Coast to create 2,500 local jobs

Approximately 2,500 local jobs will be created for the construction and operation of the $1 billion “Jewel” residential tower project located at Surfers Paradise on the Gold Coast.