The Victorian Government has called for expressions of interest to deliver works for Melbourne’s new Metro Tunnel, pledging to fund and deliver the multi-billion dollar project with or without assistance from the Federal Government.

The 9km twin tunnels will feature five new underground stations at Arden, Parkville and Domain, and two new city stations directly connected to Flinders Street and Melbourne Central. It will also give the Cranbourne, Pakenham and Sunbury lines their own tunnel through the CBD. 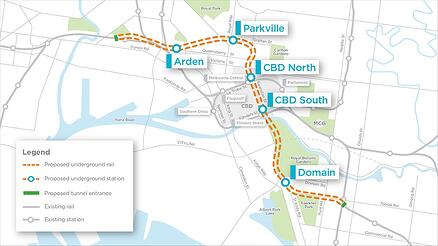 It is hoped that, coupled with 65 new high-capacity trains, these new lines will allow more trains to run in and out of the city more often and to more stations, thus reducing congestion in the suburbs and freeing up space on the already full City Loop.

Minister for Public Transport Jacinta Allan said that the tunnel will deliver the high-capacity, high-frequency metro system Melbourne needs and will cater to Melbourne’s growing population by laying the foundation for future growth of our train network. Removed quote lines

Early works are due to start in 2017, with major construction due for 2018. It’s estimated a mammoth 3,700 Victorian jobs will be created from the project.

Some of the biggest construction and engineering firms in the world are expected to tender for Australia’s largest public transport project.

Construction techniques that will be used to execute this project include tunneling and boring, mined cavern construction and cut and cover. PlantMiner has an endless list of plant and equipment hire suppliers, as well as subcontractors that can be engaged for tenders on this project:

EOI's can be submitted here until 2pm on Thursday 9 June.

See below for a video of how the Metro Tunnel will free up space in the city loop.

Mirvac has turned the first sod to signal the beginning of construction on the $300 million residential tower at Melbourne’s Yarra’s Edge precinct. This development is anticipated to support up to 2,000 jobs as well as create homes for about 3,000 residents.

A $1 billion investment will get eight dangerous and congested level crossings in Melbourne’s North removed, including four along the Upfield line and four along the Mernda line in the areas of Coburg, Brunswick and Preston.