The $110 million Mandurah Estuary Bridge Duplication project in Western Australia marks a new major milestone with Expressions of Interest for the design and construction of the new bridge commencing.

“The project will enhance connections between Peel and the metropolitan area, improving safety and convenience for thousands of Western Australians.

“I’m pleased to see this milestone achieved in the delivery of this important election commitment,” Premier Mark McGowan said.

The second bridge is going to be built adjacent to the existing bridge to provide additional traffic lanes as well as serve as a supporting structure to the current one that is used as the primary connection to the southern part of Mandurah and the Peel region.

The project will also deliver a new shared path for cyclists and pedestrians, which improves connectivity on the southern underside of the new bridge deck, along with a universally accessible recreational fishing platform that makes fishing more accessible to people of all ages and abilities.

“The duplication of the Mandurah Estuary Bridge will significantly improve congestion across the bridge, which I know can be frustrating for local residents and commuters.

“This was a key commitment at the election and I’m proud we are getting on with the jobs and delivering for the Peel region,” WA Transport, Planning and Ports Minister Rita Saffioti said. 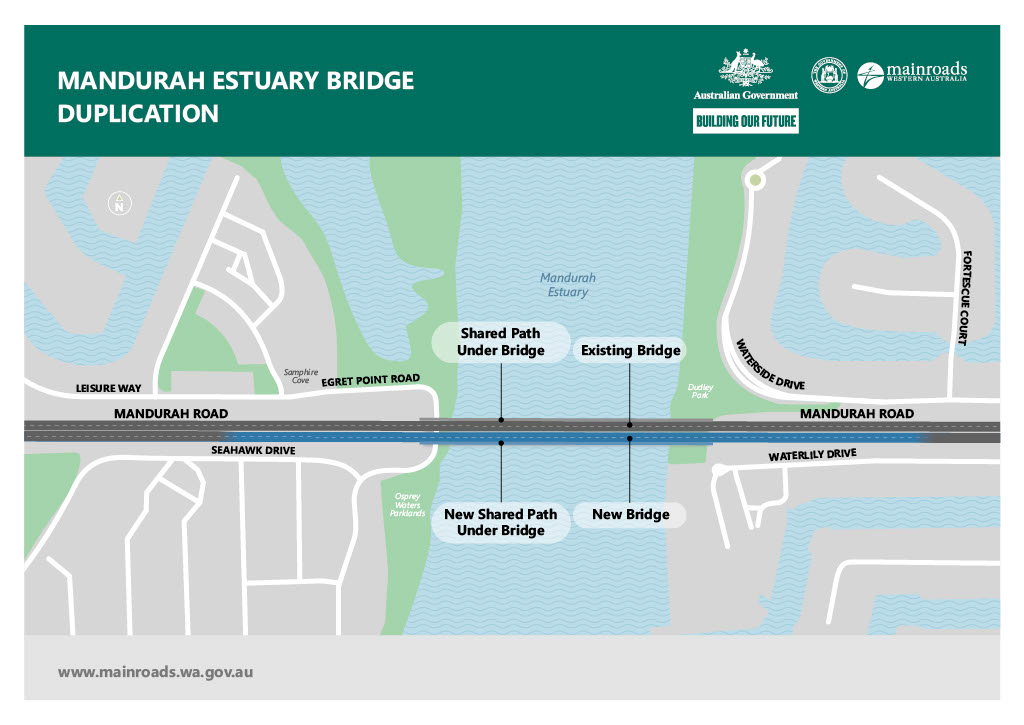 Main Roads WA is currently undertaking geotechnical site investigations both on water and on land while also working on finalising environmental and heritage assessments, project scoping and stakeholder consultation.

The existing Mandurah Estuary Bridge is utilised by more than 33,000 vehicles a day and the second bridge will help reduce congestion and improve safety for all road users.

“This project is going to be critical for busting congestion along this important arterial route and help facilitate better freight movement in the area,” WA Member for Dawesville Lisa Munday said.

“This project will deliver benefits for the whole Peel region. It will make travel easier and faster while creating local jobs,” WA Member for Murray-Wellington Robyn Clarke said.

Not only will the project deliver a second bridge, but it will also create and support more than 500 jobs during its construction, providing a much-needed boost to the local economy.

The Mandurah Estuary Bridge Duplication is jointly funded by the Australian and Western Australian Governments on a 50:50 basis.

“Resilient and reliable transport is the backbone of the nation, especially in the Peel region, which relies heavily on local infrastructure such as this bridge as the key access point for local commuters, freight, and visitors alike.

“The Australian Government is getting on with delivering infrastructure projects just like this to improve access and safety for commuters right across Australia,” Federal Infrastructure, Transport, Regional Development and Local Government Minister Catherine King said.

Monadelphous has been awarded maintenance and construction contracts for both the resources and infrastructure industries with a combined value of approximately $110 million.

Seymour Whyte Constructions has been named as the preferred contractor for the $110 million Chandler Highway Upgrade project in Victoria, with works expected to begin in a few months.