Known as Project LIFT, the redevelopment will offer increased terminal capacity, additional aircraft parking stands and improvements to ground transport, meaning service for travellers is faster and more efficient, with an expanded range of retail outlets.

"Approximately 230 full time jobs will be created during construction, while an average of 180 additional full time workers employed once the expanded terminal is completed," Mr Truss said.

"The development is expected to generate additional tourism expenditure of around $62 million per year and contribute approximately $426 million to the Gross Regional Product over 20 years from 2015–16 to 2034–35."

As part of the approval process for the project, Gold Coast Airport Pty Ltd (GCAPL) undertook a 60 business day public consultation process between 7 July 2015 and 30 September 2015. The following are responses to questions that were asked by the community during the consultation process.

1. What does the project include?

The key aspects of Project LIFT include:

Once completed, the new facilities will provide additional capacity and cater for aviation forecasts to 2023.


2. How much will the project cost?

The project is currently in the planning and design stages, and is dependent on Australian Government approval. Following approval of the project, further detailed planning will occur, including comprehensive cost modelling.

3. Who will pay for the project? Will Gold Coast Airport passengers pay more as a result?

When Project LIFT is approved by the Australian Government and proceeds to construction, the project will be undertaken by GCAPL in its role as specialist operator. As with any major development, GCAPL as the proponent will seek to recover the costs of the development over its operational life. We will do this through revenue from commercial developments on the Airport as well as Airport charges.

1. Where will the redevelopment be located? 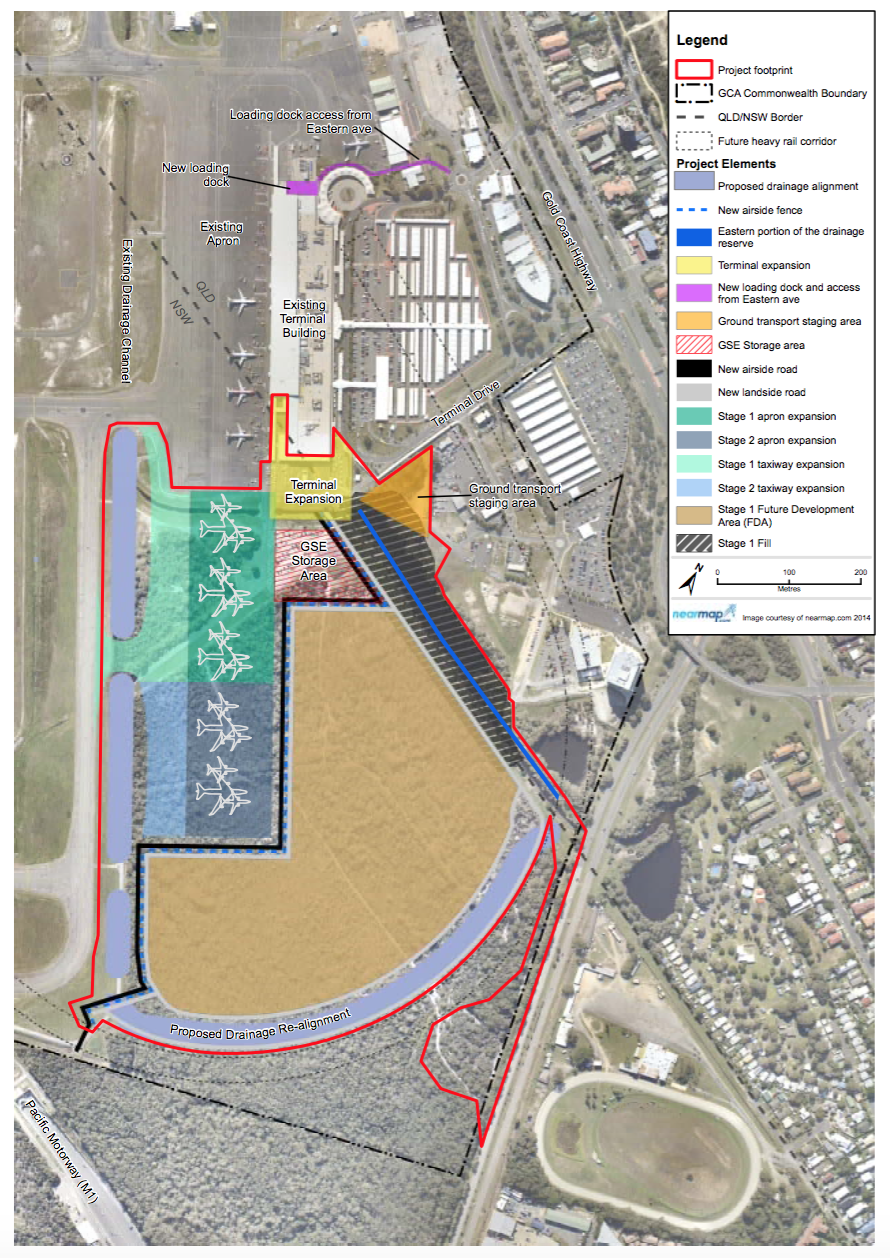 The whole of the future aviation development area, described in the Gold Coast Airport 2011 Master Plan, will be cleared as part of the project. This will create the space to construct the drainage realignment, aircraft parking stands and terminal expansion as part of Project LIFT. This area will also include the space required for construction access roads, construction compound and parking and areas for materials handling during construction. Additionally the project will create areas for future additional aircraft stands, in accordance with the Gold Coast Airport 2011 Master Plan, as well as for other interim uses such as ground transport which is consistent with the land use for this area defined in the Master Plan.

2. What currently exists on the proposed site?

3. When will construction commence?

The work requiring approval under the Major Development Plan (MDP) process will be completed in two stages.

1. Stage one will commence early 2016, and includes site preparation, vegetation clearing, drainage realignment, two new Code E aircraft parking stands, ground transport upgrades and the new terminal expansion. This stage of the project is due for substantial completion by late 2017.

2. Stage two will commence in late 2020, and includes an additional three aircraft parking stands, due for completion in early 2021. Additional work not requiring approval via the MDP process includes the refurbishment of the existing departure lounges in the terminal. Once completed in late 2018 the refurbished departure lounges will provide improved passenger processing, additional seating and an expanded range of retail outlets.

4. Will construction be completed in time for the 2018 Gold Coast Commonwealth Games?

We aim to have Stage 1 of the redevelopment completed by the end of 2017 in time for the 2018 Gold Coast Commonwealth Games, including the site preparation, vegetation clearing, drainage realignment, two new Code E aircraft parking stands, ground transport upgrades and the new terminal expansion. However the upgrades to the existing terminal departure lounges will be completed following the Games event. The Games is expected to attract more than 117,000 domestic and international visitors to the city, in addition to more than 5,000 athletes, 2,000 officials, and 2,700 members of the media. It is anticipated that a large number of these visitors will be arriving through the Airport.

5. How will you manage construction impacts?

As part of the approval process and in accordance with standard industry practice, GCAPL will undertake detailed construction planning, including strategies to mitigate and manage any impacts associated with construction. The Airport will continue to operate as normal throughout the construction period.

1. How many jobs will be created as a result of the project?

Employment opportunities will be available in the areas of construction and development, as well the ongoing operation of the facilities into the future. We anticipate that the construction stage of Project LIFT in 2016-17 will create approximately 230 jobs during construction and around 180 full-time jobs post construction.

2. Has a builder been appointed?

Taking into consideration the timeframe for delivery of Stage 1 of the project, GCAPL has opted for early contractor involvement through a two stage Managing Contractor process. A Managing Contractor, Watpac Limited (Watpac) was appointed to provide construction, buildability and program advice during the planning and design process. Subject to further negotiation, the same contractor may be appointed in early 2016 for the actual construction of the project. Construction of the project was dependent on Australian Government approval of the Major Development Plan (MDP).

Are you interested in going for a stage of the expansion? Get your business tender ready with our free guide to creating a strong business capability statement.

The $84.1 million M1 Princes Motorway upgrade between Picton Road and Bulli Tops is one step closer to construction with the design contract awarded to GHD.

The construction contract for three major upgrades along the M1 Pacific Motorway has been awarded with motorisists set to see major benefits as work commences.

Two more major upgrades to local Victorian roads are set to go underway and these upgrades will deliver a better, less congested and safer Hall Road and Western Port Highway.