The Australian Government has agreed to an enhanced design option to 'future-proof' the Warrego Highway West interchange as part of the Toowoomba Second Range Crossing (TSRC) project.

Deputy Prime Minister and Minister for Infrastructure and Regional Development Warren Truss said the modification will cost $450,000 and enable the interchange traffic bridge span to be widened in the future to accommodate construction of a partial cloverleaf overpass when the volume of traffic over the Toowoomba Range makes it necessary.

"Future proofing the intersection now will allow the interchange to be upgraded when needed, without significant additional costs and with minimal traffic delays. The cost will be met by the Australian Government as part of its $1.137 billion commitment to the TSRC project," Mr Truss said. 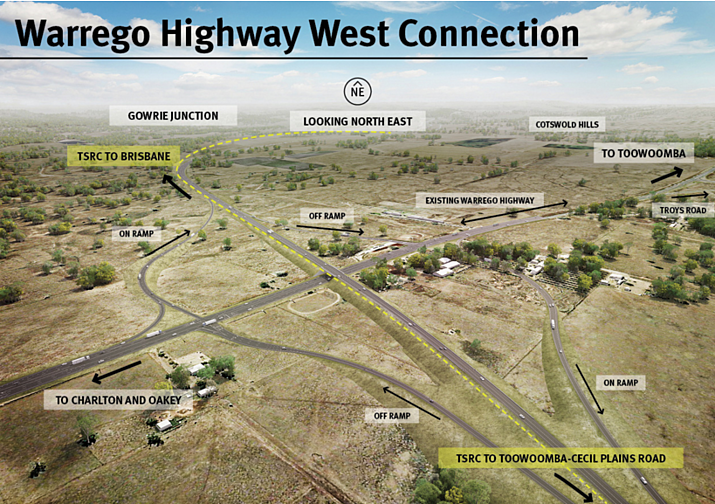 Federal Member for Groom Ian Macfarlane said the TSRC project involves the construction of a bypass route to the north of Toowoomba, running for approximately 41 kilometres from the Warrego Highway at Helidon in the east to the Gore Highway at Athol in the west.

"The bypass will provide an alternative route and assist in managing increasing traffic volumes, particularly heavy vehicle movements from the developing resources region in the Surat Basin," Mr Macfarlane said.

"It will also improve driver safety, relieve pressure on Toowoomba's local roads and enhance liveability for the city's residents.

"Future proofing crucial infrastructure like the Warrego Highway (West) interchange is important to ensure that the bypass can meet traffic demand over the longer term."

Early preconstruction works are underway with major construction work on the TSRC project expected to start in April 2016 and to be completed in late 2018, weather permitting.

The Australian Government has committed up to $1.137 billion to fund the project and the Queensland Government is committed to providing the remaining 20 per cent of the construction costs.

For a comprehensive overview of what you need to do to supply for the TSRC project, check out our coverage of the information session held by Nexus Infrastructure.

The $450 million first stage of the Solar River Project near Robertstown, South Australia is set to begin construction in May, with Downer appointed as the contractor to deliver the works.

The development of a 56 wind turbine wind farm in south west Queensland has been approved. Renewable Energy Systems’ $450 million project is set to support up to 400 jobs during construction and 35 once operational.

Nexif Energy has turned the first sod, signalling the beginning of construction on the $450 million Lincoln Gap Wind Farm and battery storage in South Australia.