Queensland’s ‘Second M1’ – the Coomera Connector – will soon be under construction following the award of the first contract for works on Stage 1 of the $1.53 billion project.

The early works agreement has been awarded to the ACCIONA Construction Australia Pty Ltd and Georgiou Group Pty Ltd Joint Venture (AGJV), along with WSP and BG&E as designers. The agreement will get the joint venture to finalise design as well as undertake enabling works for the Coomera Connector Stage 1 North between Coomera and Helensvale.

“Thousands of Gold Coasters use the M1 each and every day.

“Building the second M1 is incredibly important when it comes to easing congestion and getting people home sooner.

“Supporting job-creating infrastructure is at the core of our Economic Recovery Plan for Queensland.

“We’re investing in major projects like this to create local jobs and rebuild our economy.

“My government will always back the Gold Coast and we’ll continue to work closely with the Commonwealth to secure more investment in this city,” Premier Annastacia Palaszczuk said.

The contract award marks a significant milestone for the project, enabling the design to be finalised for the section between Shipper Drive in Coomera and Helensvale Road in Helensvale, paving the way for major construction to commence by mid-2022.

“The Coomera Connector is a significant project that will provide long-term benefits to commuters across South East Queensland by providing an alternative north-south route that will help ease congestion on the M1.

“The Morrison Government is providing funding for Stage 1 of this project as part of our record $110 billion, 10-year infrastructure investment pipeline, which is helping to drive Australia’s economic recovery.

“By alleviating congestion along critical transport corridors, we’re helping people to get home to their families sooner and safer, we’re helping freight move more quickly between our cities, and we’re generating jobs across the country,” Federal Minister for Communications, Urban Infrastructure, Cities and the Arts Paul Fletcher MP said.

The approximately 16-kilometre Stage 1 of the Coomera Connector is going to be delivered in three construction packages, namely:

“The Palaszczuk Government is delivering big for Queensland through our record $27.5 billion road and transport plan over the next four years.

“The Coomera Connector is another example of the State Government following through on our commitments through the approval of the Stage 1 Business Case in September this year, and of course preparing for the 2032 Olympics.

“The early works agreement for Stage 1 North means site compounds can be established and sub-contractors secured in readiness for major construction to start in mid-2022.

“This ensures the project will be shovel ready as soon as all environmental approvals are in place,” Queensland Transport and Main Roads Minister Mark Bailey said.

Minister Bailey added that safety is top priority through the construction and operation of the Coomera Connector. With the Queensland Government’s procurement rules on major projects, contractors are required to adhere to “the highest possible safety standards and emphasise training opportunities to grow our skilled workforce”.

“Our Better Practice Industry Conditions are also designed to create local jobs and encourage use of local suppliers, because we want as much of our investment as possible to benefit Queensland workers and Queensland businesses,” Minister Bailey said. 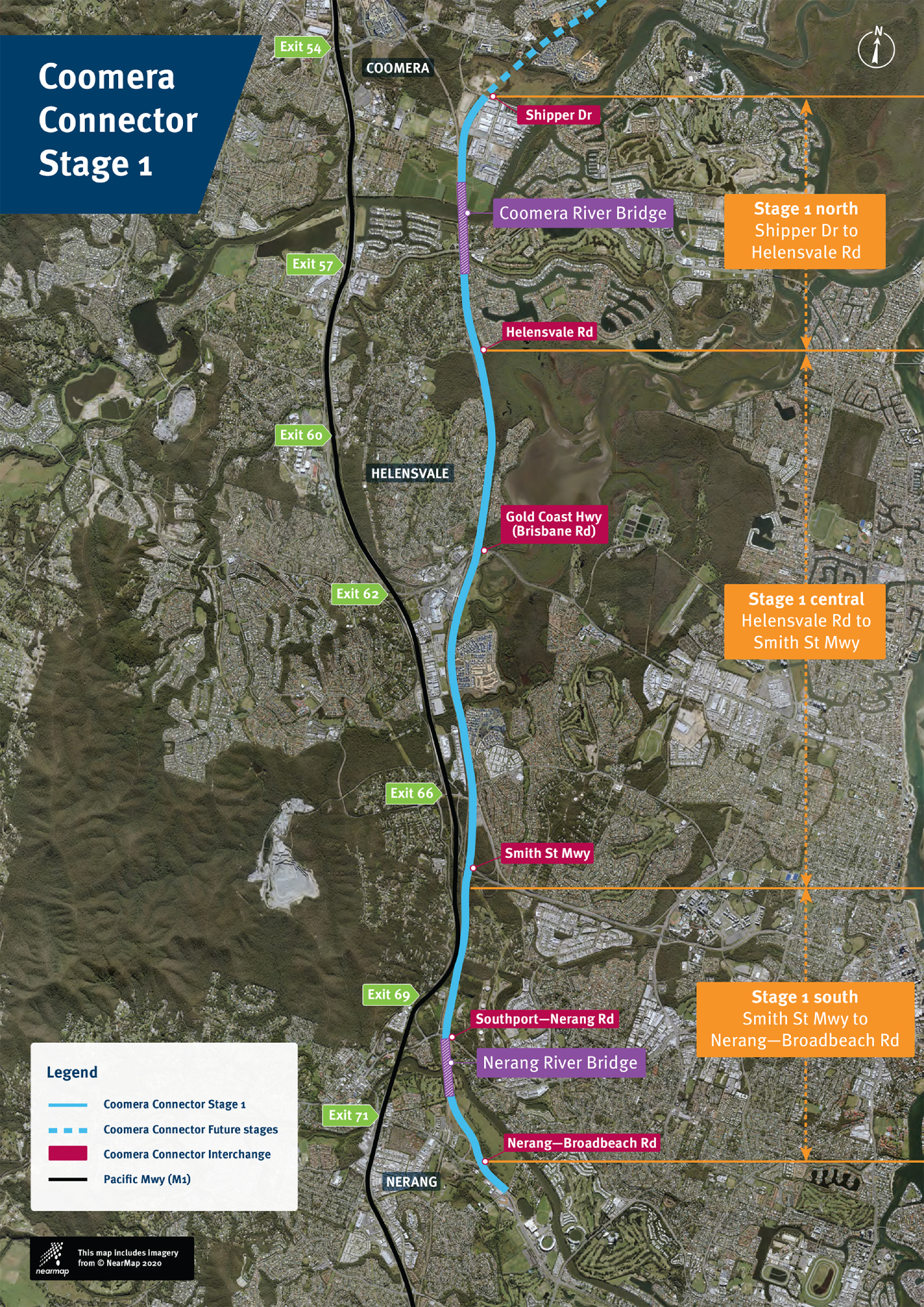 Key features of Stage 1 include:

“This delivery model results in better value for money, a focus on partnership and collaboration, and opportunities for innovation.

“Not only is this helping South East Queensland’s economic recovery from COVID-19, but we are building legacy infrastructure to support the growth of the South East.

“Consultation can now also ramp up with people immediately next to the Stage 1 corridor as the design becomes more detailed,” Ms Scanlon said.

Request for proposals for Stage 1 Central is due to be released to market before the end of the year.

Stage 1 of the Coomera Connector is jointly funded by the Australian and Queensland Governments on a 50:50 basis, each contributing $765.25 million.

Stage 1 is expected to progressively open to traffic starting late 2024.

Construction is set to commence by mid-2020 on Queensland’s M1 Pacific Motorway - Varsity Lakes to Tugun upgrade as crucial funding from the Federal and Queensland Governments has been secured.

With the conclusion of the recent Commonwealth Games, major construction works are ready to commence on Queensland’s two congestion-busting M1 Pacific Motorway upgrades.