A massive $22 billion hybrid solar and wind energy project in the Pilbara region has been recommended for environmental approval by Western Australia’s Environmental Protection Authority (EPA).

The proposed large-scale hybrid renewable energy development – named Asian Renewable Energy Hub – will have a total generation capacity of 15GW, which is set to flow into the Pilbara power network. The project will also include the development of a green hydrogen manufacturing hub for Asian export as well as for domestic sale.

The renewable energy hub is being developed by consortium partners InterContinental Energy, CWP Energy Australia, Vestas and Macquarie Bank and it is expected to have an operational lifespan of 50 years.

The project is going to be built on a 6,500 square kilometre site and will comprise of solar panels scattered in between wind turbines – up to 1,743 turbines in total – about 220 kilometres east of Port Hedland.

Asian Renewable Energy Hub will also include above and below ground transmission cables and four subsea power cables to be utilised for hydrogen export to Southeast Asia.

“One of the key environmental issues the EPA considered was the proposed clearing of 11,962 hectares of native vegetation, and its potential impact on fauna habitat, flora and vegetation. The EPA also considered the potential impact from the construction and operation of four subsea cables on benthic communities and habitat, marine environmental quality and marine fauna. 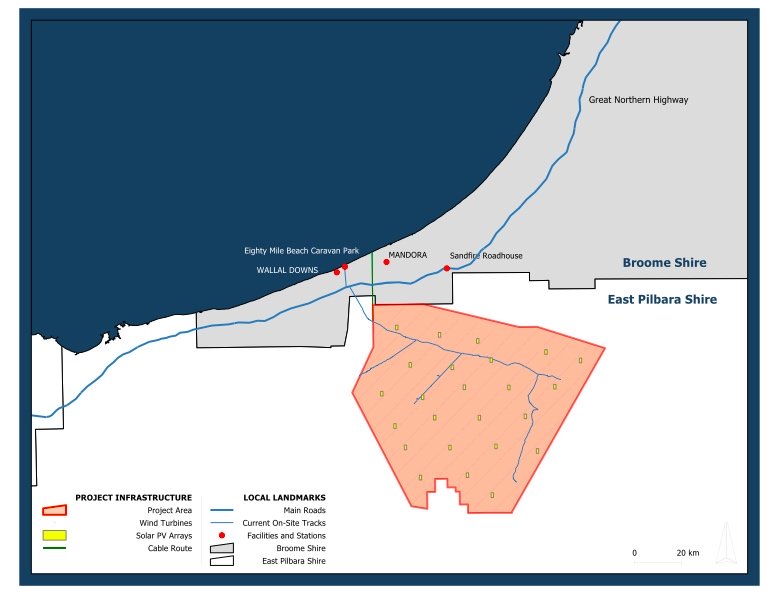 Environmental approval for this project is subject to a number of conditions, including managing and monitoring the impacts of the project on migratory birds.

With the wind turbines to be located approximately 26 kilometres from Eight Mile Beach and 13 kilometres from Mandora Marsh, the distance between the Ramsar wetlands and the project site will make impacts on migratory birds manageable.

This massive renewable energy project is anticipated to create up to 3,000 jobs over a 10-year construction phase and more than 400 operational jobs.

Currently, the project developer is negotiating the terms of an Indigenous Land User Agreement as the Asian Renewable Energy Hub is located within the Nyangumarta Native Title Claim area.

A final investment decision is anticipated to be announced in 2025, with a staged construction phase to begin in 2026. Asian Renewable Energy Hub is set have its first export in 2027.

What do you think of this massive renewable energy project? Let us know your thoughts in the comments below.

Don’t forget to subscribe to the Felix Project News today to stay up to date with the latest industry news and project updates.

A new milestone has been reached on Victoria’s biggest road project - the $15.8 billion North East Link - with detailed designs revealed and will be on display across suburbs in the State’s north eastern region over the next weeks.

Victoria’s $15.8 billion North East Link is moving forward, with the project already put out to market to find builders that will deliver the State’s largest road project.

The North East Link – Victoria’s largest road project – has reached another major milestone with the announcement of a preferred bidder to deliver the tunnelling package.