A new large-scale renewable energy project is set to be delivered in Tasmania following the granting of Major Project status to the North East Wind Project by the State Government.

According to Minister for Planning Michael Ferguson, the wind farm is the second project to be assessed under the State’s streamlined Major Projects assessment process – the New Bridgewater Bridge is the first.

The North East Wind Project is being developed by ACEN Australia.

“Now that I have made this decision, this project will go through the same comprehensive and streamlined assessment process allowing public input, rather than the old planning process which was simply unworkable for large projects like this.

“It is pleasing to see that private developers such as ACEN Australia also have confidence in our new planning process and have recognised the advantages of a coordinated assessment that is independent, comprehensive and rigorous, and which provides certainty and transparency to both proponents and the community.

“It is just the type of large-scale, complex project for which our Major Projects assessment process was developed,” Minister Ferguson said.

The North East Wind Farm is proposed to include up to 210 wind turbines scattered at two locations in Dorset – Rushy Lagoon in the east and Waterhouse in the west. The wind project, once approved, is anticipated to generate up to 1,260MW of green energy. 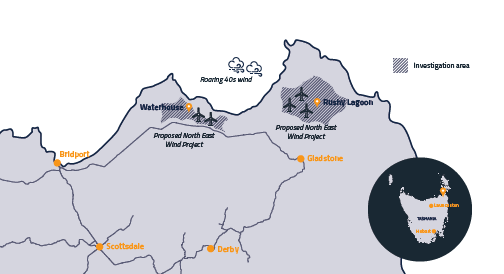 The project – estimated to have a construction value of $2.7 billion – will also include the delivery of a range of ancillary infrastructure such as roads, electrical infrastructure, quarries, services, and a wharf.

In addition, the massive renewable energy project is expected to generate up to 400 jobs during peak construction as well as 65 ongoing jobs once operational.

“Tasmania can be the nation’s cleanest, smartest and most innovative state.

“What this means is that through the development of more renewable energy we will deliver jobs for future generations of Tasmanians, and ensure the cheapest form of electricity, renewable energy, supports growing investment and new industries here on island, while also supporting our country’s move to cut emissions and tackle climate change,” Minister for Energy and Renewables Guy Barnett said.

The North East Wind Project is expected to take between three to five years to develop, with full construction taking five years to complete.

The wind farm has an operational life of 25 years.

“We’ve already been engaging with the local community and stakeholders for sone time and importantly we will continue to do this throughout the development. We are seeking inputs from the local community and stakeholders including Aboriginal representative groups, training and education providers as well as social enterprises to help shape the project.

“Once the project is operational, there will be long-term employment and service provision opportunities for the North East region and we have a commitment to employ and buy regionally where we can so we can keep the benefits local. For example, there will be likely opportunities for businesses to provide goods and services such as accommodation and catering, fencing, earthworks and landscaping, environmental monitoring, engineering, construction materials and equipment just to name a few,” ACEN Australia Chief Operating Officer David Pollington said.

The State is currently in the process of doubling its renewable energy output while also injecting billions into the Tasmanian economy and creating thousands of local regional jobs.

Tasmania has already achieved 100 per cent renewable status and the State is on track to achieving the 200 per cent Tasmanian Renewable Energy Target by 2040 with the help of projects such as the North East Wind Farm that is also complemented by Marinus Link, Battery of the Nation and the State’s emerging Green Hydrogen industry.

A $560 million cobalt project in New South Wales is on its way to beginning development following the grant of Major Project Status by the Australian Government.