Melbourne prepares for Metro Tunnel with $25m worth of upgrades

In preparation for the Metro Tunnel, over 250 locations across Melbourne CBD will undergo road and traffic management upgrades worth more than $25 million. These upgrades will help keep the city moving during the construction of Metro Tunnel.

“These small changes will keep Melbourne moving while we build the Metro Tunnel and a better transport system for Victoria,” said Minister for Roads Luke Donnellan

In order to improve traffic flow as well as provide an alternative route to these roads, parking near intersections on La Trobe Street – between Exhibition and King Streets – will be removed. During the morning peak, a ‘no-stopping’ zone will be implemented eastbound on Victoria Street – between Leicester and Nicholson Streets.

Domain road is going to be closed in late April 2017, from St Kilda Road up to the edge of Edmund Herring Oval for the construction of the new Domain Station. Trams will also begin to run along the new Toorak Road West connection about the same time next year. 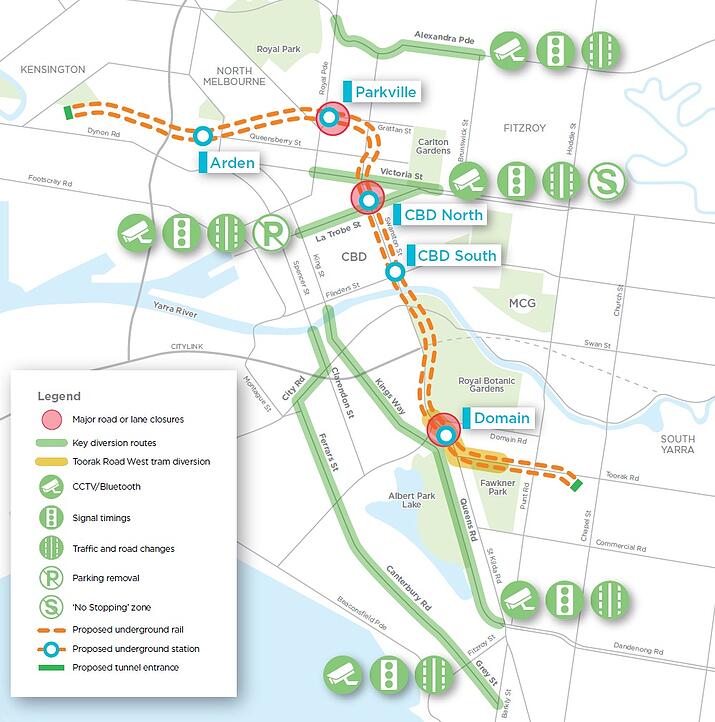 Starting late in 2017 up to the completion of the new Domain Station – which will take about three years – St Kilda Road will be reconfigured to one lane in each direction, between Domain and Toorak Road. Pedestrian, Bicycle and tram access will be maintained, however.

Aside from these adjustments, over 100 traffic lights will be re-programmed at key intersections across inner Melbourne in order to improve traffic flow. CCTV cameras will also be installed on alternative routes – such as at Kings Way and Queens Road – which will help monitor traffic in real-time as well as enable a quicker response to incidents on these key corridors.

“There will be a huge impact on our city while we build the Metro Tunnel but the biggest impact will be once its finished, delivering more trains in and out of the city for passengers in suburbs and regions across Victoria.

“The Metro Tunnel will make a real difference to people’s lives, wherever they live. It means less time waiting on platforms or stuck on the train, and more time with their family,” said Minister for Public Transport Jacinta Allan.

VicRoads, the Melbourne Metro Rail Authority and local councils has been working closely to develop this comprehensive traffic management strategy. For updates, changes and announcements regarding this project, you may visit the Metro Tunnel website.

We’ll be keeping an eye out for further updates on this project as well as the Metro Rail project, so subscribe to Felix Project News to receive the latest news.

Perth receives proposal for a $25m surf park in Melville

Perth-based company Wave Park Group has proposed a $25 million surf park at the Swan River foreshore in Melville. The 2.4 hectare lagoon will be built in Alfred Cove where the Melville Bowling Club in Tompkins Park is located.

Georgiou Group will be working on New South Wales’ Sydney Metro Northwest project, with the company awarded a $25 million contract. This is Georgiou Group’s first awarded contract for works on this multi-billion dollar project.

Major construction activities to upgrade Memorial Avenue at Kellyville, New South Wales is set to begin later this year and Transport for NSW has awarded the contract to build the project to Daracon Contractors.