Following the release of the Request for Proposal to market, the METRONET Midland Station development marks a new milestone with the release of new concept designs and the Project Definition Plan (PDP).

The new modern station between Helena and Cale streets will have a contemporary design featuring three platforms that can cater up to six cars, a public-accessible pedestrian overpass that links to both sides of the railway and green community spaces.

The PDP highlights how the new station is going to be integrated with the surrounding Midland town centre, including DevelopmentWA’s METRONET East-Midland Project.

The contract for build the new Midland Station is anticipated to be awarded in mid-2021.

“All along the Morrison Government has sad that METRONET will re-shape Perth and today’s concept designs show us how that transformation will take place. 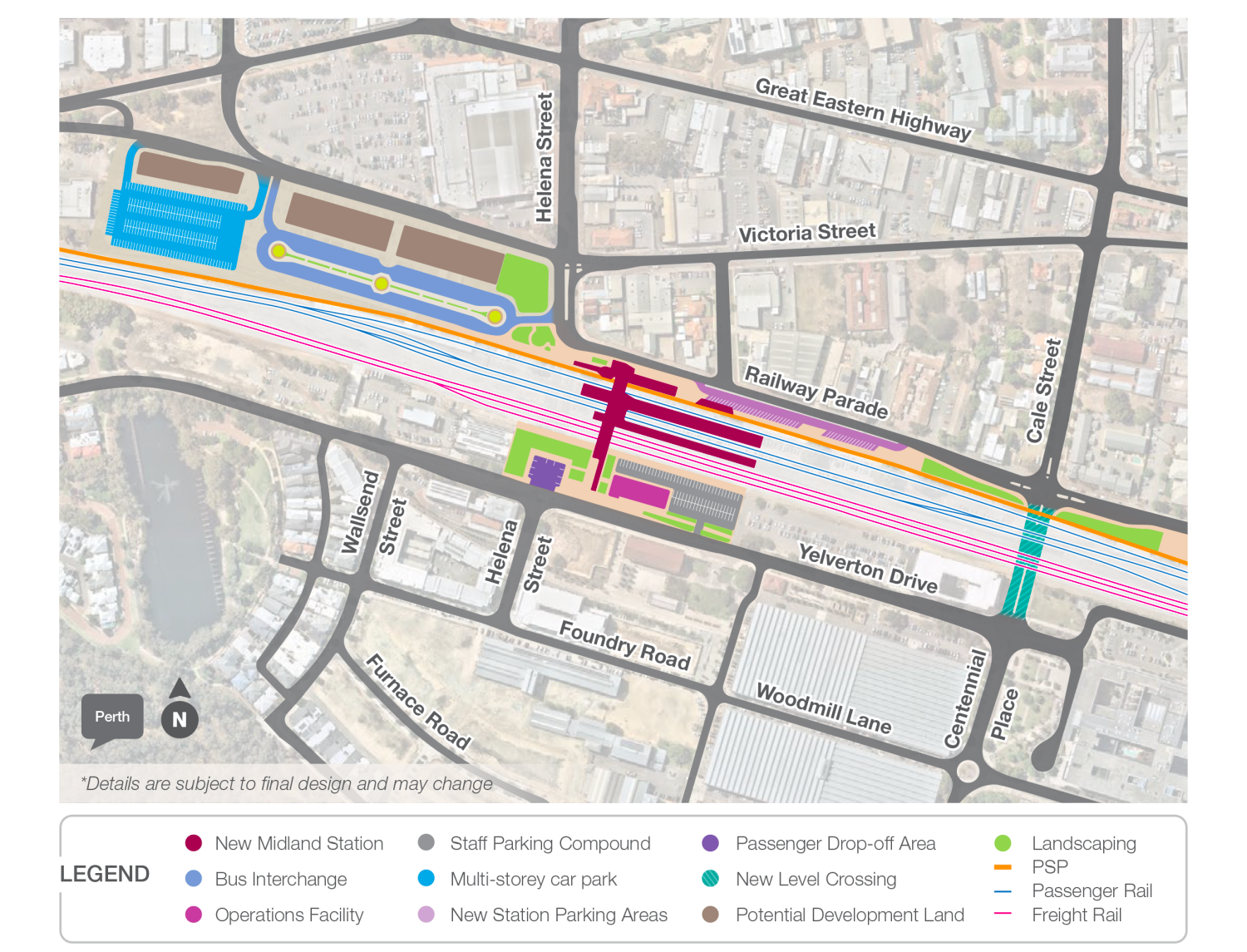 The Midland Station project will include:

“The new Midland Station will be modern, practical and easy to access, connecting well with surrounding businesses, the Midland health campus and homes.

“The new station will also link to METRONET’s Bellevue Depot, making it the first landmark our brand new C-Series trains will pass through on their way to regular service on the network,” Transport Minister Rita Saffioti said.

According to Federal Member for Hasluck Ken Wyatt AM MP, the new station is set to make a significant difference for locals.

“The new station will make it easier for people from the hills and foothills to access the rail line.

“This will make a big difference for all members of our community, especially those who use public transport to get to work or school,” Mr Wyatt said.

The new Midland Station is going to replace the existing 52-year-old station with a more modern facility that is better integrated with the surrounding area and is closer to Midland Gate Shopping Centre as well as Midland Health Campus.

“This new station will much better link Midland with the civic precinct, including Midland Gate Shopping Centre, the Hospital and Curtin University’s Midland campus.

“Midland will have a modern new station together with new community forecourts and options for future mixed-use developments,” State Member for Midland Michelle Roberts said.

A new major milestone has been reached by the much anticipated Morley-Ellenbrook Line development in Western Australia, with the route and station locations finalised. This takes the project to the next stage of planning which will get estimated project costing, design, scope and bus/train operations finalised.

The METRONET Midland Station Project is progressing well towards construction and a Request for Proposal (RFP) has been released to market for the relocation of the station.

A new major milestone has been reached on the new METRONET Midland Station project in Western Australia with the award of a $246.7 million design and construction contract.