The five-level Club Stand – designed by Bates Smart Architects – is going to set a new standard for racecourse facilities and it will also represent the 10th grandstand that’s built at Flemington since 1865.

“We are delighted to be part of this exciting new project at Flemington. The new Club Stand is world-class and will deliver a completely new experience for racing patrons,” said Multiplex Regional Managing Director Graham Cottam.

The Club Stand’s design celebrates the rich history as well as character of Flemington Racecourse. The development will feature a 360-degree view of the Mounting Yard, race track, Members Lawn, Parade and Betting Rings, and Winning Post. 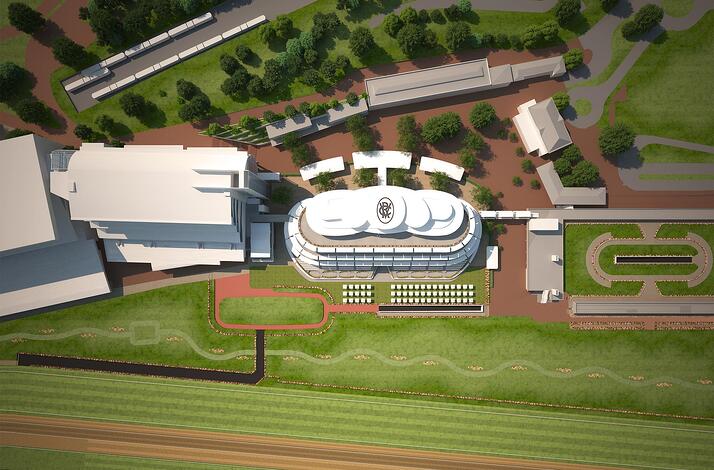 An external walkway will surround the new building, connecting to the existing Members Stand and Parade Ring. The Club Stand will also have a new north-south corridor as its centre which links the Betting Ring with the Members lawn and Mounting Yard.

As part of the project, the Members lawn will be expanded and it will be seamlessly linked to function spaces on Level One using a grand sloping tier of seating that surrounds viewing platforms and gardens.

As Club Stand’s architectural signature design element, the rooftop garden will offer landscaped areas with open and enclosed spaces under canopies and it is going to be found on Level Five.

Construction on Club Stand is expected to begin after the 2016 Melbourne Cup Carnival, with completion before the 2018 Melbourne Cup. This project will also create up to 350 jobs during the construction phase.

Get the latest industry news and project updates straight to you inbox by subscribing to the PlantMiner newsletter today.

The Queensland Government has given the go-ahead to the development of a new $128 million wind farm within the South Burnett Regional Council which will support up to 100 jobs for regional Queensland.

The delivery of the Parramatta Light Rail Stage 2 is pushing ahead, and the New South Wales Government is committing $602.4 million to get construction going and a detailed planning process started.

The $125 million Port Rail Transformation Project in Victoria is progressing well as it reaches the next stage of works, taking the project a step closer to transforming the rail network at the Port of Melbourne as well as removing trucks from Victorian roads.