The large-scale 720MW New England hybrid solar farm and battery storage project in New South Wales is set to begin construction in early 2021, with the appointment of Elecnor Australia as lead contractor to deliver the first stage of the project.

The engineering, procurement and construction (EPC) contract will get Elecnor to build the first 400MW (AC) stage of the massive renewable energy project. Works will include the installation of solar panels as well as the construction of a 33/330kV substation.

Elecnor will also be responsible for the ongoing operation and maintenance during the first two years of operations of the New England project.

The New England Solar Farm is being developed by UPC\AC Renewables Australia and it is going to be built on a 2,000 hectare site near Uralla in the State’s New England region.

“Not only are we providing clean energy to the grid, with the support of the NSW Government we are providing dispatchable energy, in the form of a 50MW battery. It will provide much needed jobs and an injection of capital into the New England region. We’ve been working very closely with the local Uralla community and our other stakeholders on this project for the past three years. It is exciting to reach this milestone,” UPC\AC Renewables CEO Anton Rohner said. 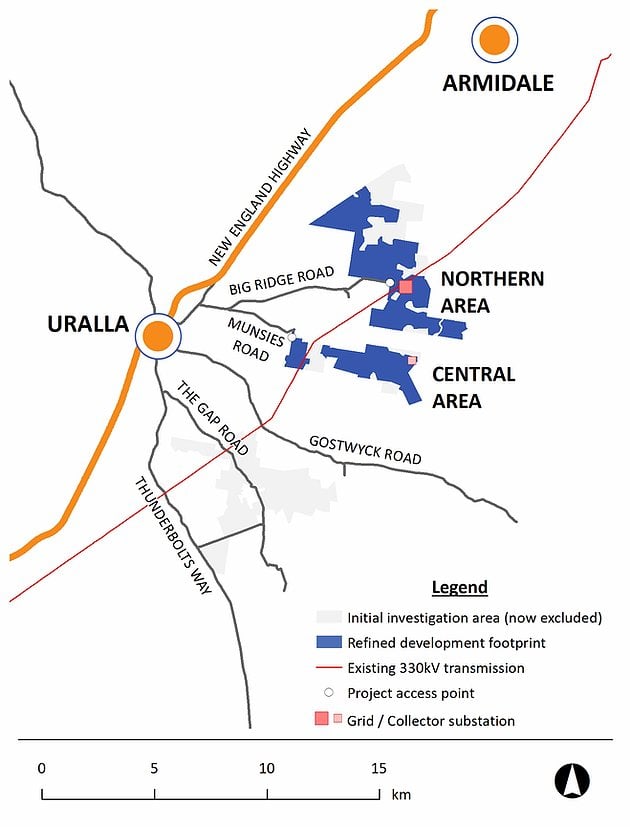 The project will utilise a single-axis tracking technology to allow solar panels to follow the path of the sun and, at the same time, provide enough grazing space for sheep across the project site, in between and underneath the panels.

The New England project is going to be built in two stages, with the first stage delivering the first 400MW (AC) capacity, a 50MWh Battery Energy Storage System (BESS) and a 33/330kV substation that will connect the solar farm to the transmission grid through an existing 330kV line that crosses the project site.

The new renewable energy project is expected to create up to 700 jobs at peak construction period and a further 15 jobs once it is operational.

In addition, a number of local businesses and contractors have already been engaged to deliver early works on the project, including surveying, engineering design and geotechnical studies.

Once up and running, the New England Solar Farm is anticipated to produce up to 1.8 million MWh of clean energy each year. This is enough to provide electricity to more than 250,000 average New South Wales homes.

Lendlease has announced that it has been awarded the contract to deliver main works on the Prince of Wales Hospital’s new Acute Services Building in New South Wales. The company is expected to have approximately 600 workers on site during peak construction.

Arrium Mining has awarded BGC Contracting Pty Ltd a new contract worth over $720 million for works on the Iron Knob and South Middleback Ranges iron ore projects near Whyalla in South Australia.

Construction has commenced on Stage 1 of a large-scale hybrid renewable energy project – comprised of a solar farm and a battery storage system – in the New England region of New South Wales.