These milestones include the Environmental Protection and Biodiversity Conservation Act 1999 (EPBC) approval granted to the Kidston Connection Project along with the arrival of the first delivery of parts for the pumped hydro station at the Port of Townsville.

“Our Queensland Energy and Jobs Plan is all about a future of cheaper, cleaner and secure energy for Queenslanders, powering good jobs in new regional industries.

“It will build the Queensland SuperGrid, Australia’s largest, transporting renewable energy from the regions, powering industry and households.

The Kidston Pumped Hydro Project is the flagship project on Genex Power’s Kidston Clean Energy Hub. The project is being built on the old Kidston Gold Mine, utilising existing infrastructure such as the Wises and Eldridge pits as the upper and lower reservoirs, the Copperfield Dam for its water pipeline as well as existing mining accommodation, road access and airstrip.

This project is anticipated to create up to 900 jobs and generate 250MW of renewable energy.

“This is an exciting project for the region because pumped hydro is an important part of our Energy and Jobs Plan moving forward.

“This project is already creating good jobs in Townsville and North Queensland.

“Not only will the Kidston project be a fantastic mix of solar and pumped hydro it also demonstrated innovative thinking by transforming an old mine site into an energy hub,” Resources Minister and Member for Townsville Scott Stewart said.

According to Member for Thuringowa Aaron Harper, the region is well-placed to support the State’s booming renewable energy industry.

Mr Harper said: “It’s great to see this arriving at our publicly owned Port of Townsville which is so important in supporting projects like this.

“With our fantastic weather and wide open spaces, embracing these opportunities will be key to our future.”

Member for Mundingburra Les Walker added that the Townsville region as well as North Queensland are already powerhouses for renewable energy.

“This project is supporting hundreds of good jobs and there are potentially thousands more as we grew the renewable industry in the north.

“There are huge opportunities for the city through Queensland’s Energy and Jobs Plan through renewable energy as well as developing a hydrogen industry,” Mr Walker said. 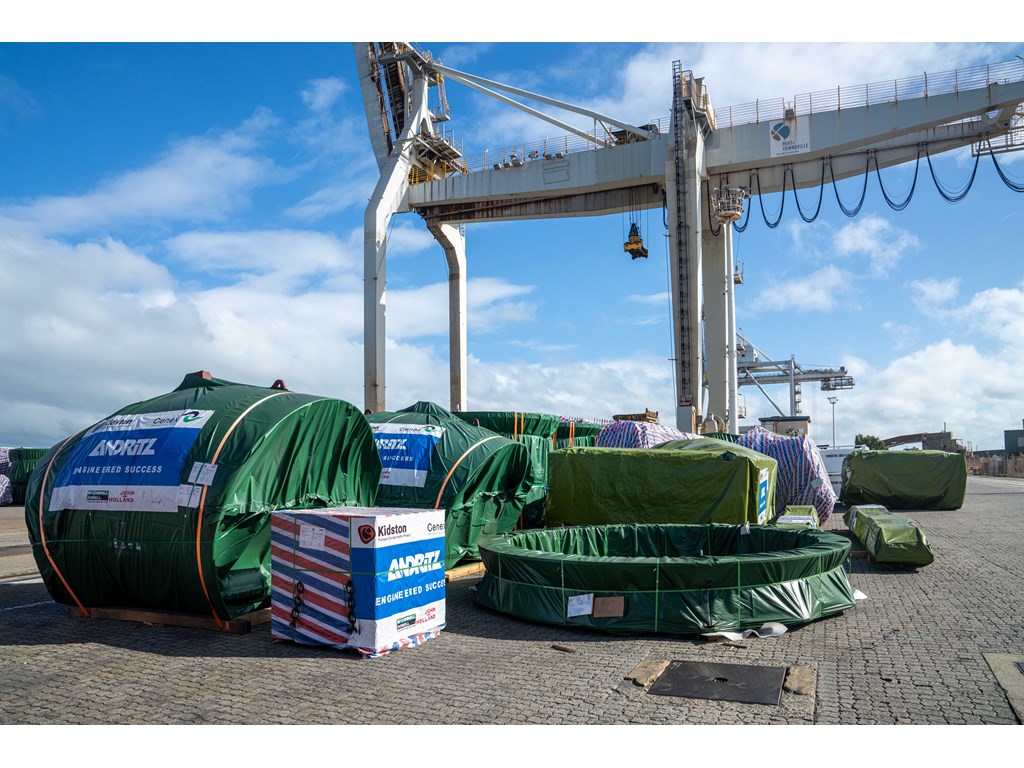 The arrival of the first parts for the Kidston Pumped Storage Hydro Project is an important milestone for the $777 million development.

The parts will be transported to the project site and stored until excavation is completed on the underground powerhouse and equipment installation begins.

“The Kidston Pumped Storage Hydro is Genex’s flagship project, and the first of its kind to be developed in Australia in more than 40 years.

“We’re looking forward to continuing to work with Townsville and all of North Queensland to support job opportunities as the project progresses,” Genex Power CEO James Harding said.

On the other hand, ANDRITZ will be supplying the electro-mechanical equipment for the pumped hydro project. The parts being delivered include stay rings, spiral case sections, draft tube liner sections, draft tube cones and draft tube gate frames for the embedment into the concrete structure of the powerhouse.

The current transport of parts is comprised of about 35 trucks in total and are on the way to the Kidston project site.

Manufacturing of the components for the turbine and generator is also underway, with the arrival of these components expected in the second quarter of 2023.

Both the Kidston Pumped Storage Hydro Project and Kidston Connection Project are due to be completed in 2025.

AGL Energy has signed a binding agreement with Hillgrove Resources Limited for the rights to build, own and operate a 250MW pumped hydro energy storage development on the site of the old Kanmantoo copper mine in South Australia.

The Queensland Government has given the green light to the development of Acciona Australia’s proposed 250MW Aldoga Solar Farm, which is going to be located approximately 20 kilometres north-west of Gladstone.