The final section of the North-South Corridor in South Australia – the Torrens to Darlington T2D Project – has reached a new milestone as detailed plans are revealed for the area where Southern Road intersects with Anzac Highway.

The detailed plan includes the crucial northern entry and exit points of T2D southern tunnels as well as a direct link to Anzac Highway to allow motorists to get from the southern suburbs to the Adelaide CBD without stopping for traffic lights.

A new elevated ramp will take motorists from the south directly from the T2D Motorway to Anzac Highway via a new structure over the interchange at South Road.

“The T2D is the final piece of one of the most significant projects in the state’s history and will not only dramatically reduce travel times for people going north and south, but will also make it much quicker for the thousands of motorists travelling into the city.

“By alleviating congestion across the city, we’re helping people to get home to their families sooner and safer, we’re helping freight move more quickly between our cities, and we’re generating thousands of jobs for South Australians.

“The Morrison Government has invested billion in the North-South Corridor as part of our record $110 billion infrastructure investment pipeline, which is helping to drive the nation’s economic recovery,” Federal Minister for Communications, Urban Infrastructure, Cities and the Arts Paul Fletcher MP said.

Following a rigorous planning and design process, the solution for this key east/west component of the project was identified and its delivery is going to be achieved without the need to acquire property on Anzac Highway. This solution is in contrast to early designs that had more land acquisition impacts, including local heritage-listed buildings.

In contrast, the new detailed plan for this project will have vegetation impacts but the T2D Project will commit to replanting and replacing trees where possible as well as explore other city-shaping options that will deliver more tree canopy across the project route.

In addition to its commitment to re-vegetation, the project team will also work closely with key stakeholders such as the Returned & Services League and Department of Veterans’ Affairs to ensure the new elevated ramp and urban design at this location will pay tribute to the ANZACs as well as all Australian servicemen and servicewomen.

“We understand this will be a change for this part of Anzac Highway but we are committed to making sure this area remains one that all South Australians can be proud of.

“A key stakeholder working group is being established to ensure this important thoroughfare continues to be an appropriate ANZAC tribute,” South Australia Minister for Infrastructure and Transport Corey Wingard MP said. 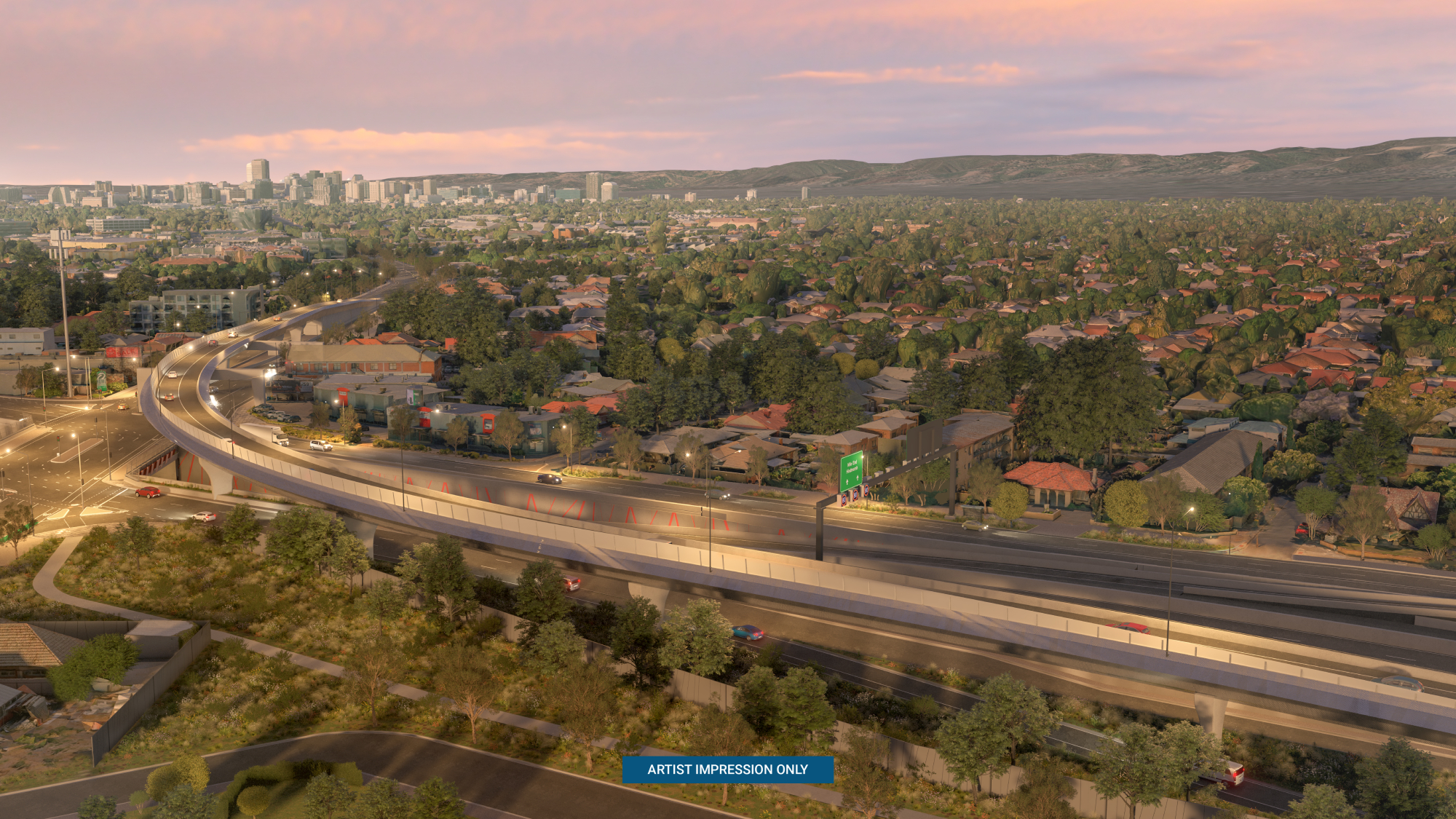 The recent project design will prioritise safety. This means motorists will be able to travel onto Anzac Highway through a new dedicated lane, removing the need to merge immediately. The elevated ramp will also facilitate traffic movement to reduce congestion on the motorway and tunnels.

In addition, the detailed plan includes a pedestrian-cyclist overpass that will maintain east-west connectivity – most especially for people accessing the Black Forest Primary School and shopping centre – and a dedicated school drop-off and pick-up area.

“This solution is safer and more convenient than the current crossing on South Road and will encourage children and families to be active by safely walking or cycling to school.

“Those accessing the school by car will also be able to use a new dedicated drop-off and pick-up area right in front of the campus and well away from South Road.

“This proposed layout of the northern portal shows the project is progressing well with complex design issues being resolved for specific sections of the motorway in the lead-up to the release of the milestone Reference Design by the end of 2021,” Minister Wingard said.

Additional details for the two three-lane Southern Tunnels – to be built from Tonsley-Clovelly Park end beginning in 2023 – will emerge at Glandore, which is near the Glenelg tramline overpass that crosses the current South Road.

Traffic at Cross Road will connect to the motorway via South Road by using a layout that minimises the footprint needed for the project while, at the same time, maintaining the Adelaide Metro Tram network operations through the preservation of the trams’ ability to return to the Morphettville depot at the end of the day for safe storage and maintenance.

The South Australian Department for Infrastructure and Transport will continue privately and confidentially engaging with owners and tenants in Glandore whose properties are required for compulsory acquisition.

The department has already written to those residents and businesses in late September and more than 90 per cent have already responded, with over 90 initial face-to-face meetings already held or have been scheduled.

“We want to give people flexibility about when they need to leave the area and, above all, help them achieve an acceptable outcome.

“We fully appreciate that for those whose properties are required for acquisition this can be a challenging process and an emotional experience and that’s why we’re working with impacted residents in a respectful and sensitive manner,” Minister Wingard said.

The Torrens to Darlington Project will deliver the final 10.5-kilometre of the North-South Corridor. This project will combine tunnels, lowered and ground-level motorways along with overpasses and underpasses at key intersections. This option will enable motorists to bypass 21 sets of traffic lights between the River Torrens and Darlington.

Construction on the Southern Tunnels is anticipated to commence in late 2023 and the entire project completed in 2030, subject to necessary planning, approvals and funding.

Stage 1 of the Torrens to Darlington Project that links Anzac Highway to Darlington is jointly funded by the Australian and South Australian Governments, with $5.422 billion already committed.

South Australia's North-South Corridor is a step closer to being completed as more pre-construction works get underway on the Southern Tunnel section of the project.

Over the next few months, approximately 157 jobs are set to be supported through the delivery of $85 million worth of early enabling works as part of the development that will complete South Australia's largest infrastructure project yet – the North-South Corridor.

Construction on the tunnels for the Torrens to Darlington Project – the final section that will complete the North-South Corridor – in South Australia is a step closer to commencing as the location for the tunnel boring machines (TBMs) launch site is revealed.