The Taskforce will aim to ensure more than 240 of the jobs for the Northern Connector project go to workers from the northern suburbs, particularly those highly skilled workers facing unemployment with the closure of Holden.

We saw with the southern Expressway that 90 per cent of jobs went to South Australians but also over 50 per cent were southern suburbs residents. That’s a great result. We want to replicate that result in northern suburbs.

This is a fantastic opportunity to make sure we make the transition for workers leaving one job but we are able to create a job (for them) in the Northern Connector.

This is a consequence of the shakedown of car manufacturing industry. It doesn’t just affect Holden, it affects component workers and has knock-on effects. We must make sure jobs go to people affected by economic circumstances.

The Taskforce will focus on the Salisbury, Playford and Port Adelaide Enfield council areas and work closely with the Holden Transition Centre, job networks and other stakeholders.

This is a significant and important commitment to the future of northern Adelaide. Major works on the Northern Connector are scheduled to begin next May and the project is expected to be completed in late 2019.

The completed Northern Connector will significantly improve connectivity, travel times and transport capabilities around Salisbury and the State opening up further development and growth opportunities. 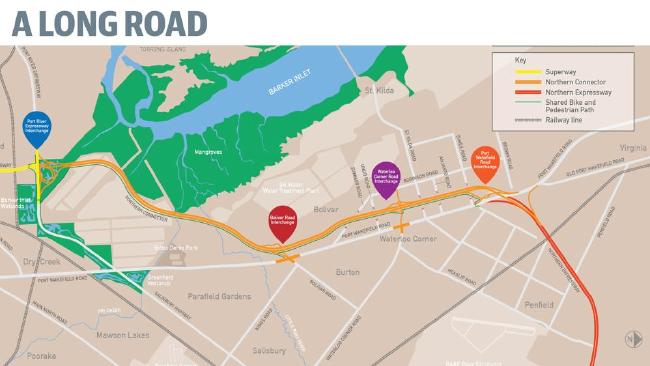 The jobs taskforce, led by the Little Para MP, Lee Odenwalder, will also ensure a minimum of 20 per cent of total labour hours are undertaken by apprentices and trainees, indigenous workers and people facing barriers to employment.

SA Transport and Infrastructure Minister, Stephen Mulligan, said the state and federal governments had committed to a $3 billion infrastructure spend through direct job creation and by providing productivity savings for businesses and commuters.

Lend Lease and a joint venture between Leighton Contractors and York Civil were confirmed as the two bidders short-listed for the design and construction of the Northern Connector.

Major works will begin in May next year with a December 2019 completion deadline.

During the tender stage, the project was subject to a 20 percent weighting under the government's Industry Participation Policy. If you're interested in finding out why local suppliers are weighted in government bids, or how to highlight them effectively in your next tender, download this FREE eBook to help you write a tender application that caters to local preference policies.

The Northern Connector, Lendlease's upcoming construction of a 15.5km six-lane road that will link Greater Adelaide, has opened it's 'one-stop shop for employment, training and education' to give South Australians unprecedented access to job opportunities on the $985 million project.

After calling for EOI's in October 2015, the SA Government have awarded Lendlease Engineering the design & construct contract for the $985m Northern Connector Project.

The main contractor on the Northern Connector project, Lendlease, has launched a website linking jobseekers to vacancies on the $985m project. NorthHub will be the go-to centre for any updates and information about the project.