The $2 billion M1 Pacific Motorway extension to Raymond Terrace project in New South Wales is moving forward with Registrations of Interest (ROI) now underway and pre-qualified contractors are invited to get involved.

This follows the call for Expression of Interest (EOI) back in September of this year, where interested parties were encouraged to pre-register their interest in the delivery of two major work packages.

Suppliers who are interested in getting involved in the delivery of this project can fill out the online form here and details will be passed on to the successful contractor once appointed.

“This game-changing project will help ease congestion for the 25,000 vehicles that use this stretch between Newcastle and Maitland every day, helping to keep freight, commuters and tourists moving.

“The extension is a huge investment for the region and shows how we’re planning for the future of our national transport network and the significant growth we’re seeing between Sydney, Newcastle, the North Coast and Brisbane,” Deputy Prime Minister and Minister for Infrastructure, Transport and Regional Development Barnaby Joyce said.

This congestion-busting project is jointly funded by the Australian and New South Wales Governments – each contributing $1.6 billion and $400 million respectively – and will deliver the M1 to Raymond Terrace as well as Hexham Straight projects.

In addition to improved highway connections and travel times, the project is also anticipated to support up to 2,700 jobs.

The M1 Pacific Motorway extension to Raymond Terrace is the final ‘missing link’ in a series of works that will deliver smoother journeys between the Victorian and Queensland borders.

“We have already crossed the finish line on the $15 billion Pacific Highway Upgrade, duplicating the 657-kilometre stretch between Hexham and the Queensland border, and are now powering ahead with the 14-kilometre Coffs Harbour bypass.

“Our focus is now turning to this final section – with demand on the road network in the Hunter only anticipated to increase as populations grow, the M1 extension to Raymond Terrace will provide improved traffic flow and increased connectivity, while ensuring better access to the road network for local traffic,” New South Wales Deputy Premier and Minister for Regional Transport and Roads Paul Toole said. 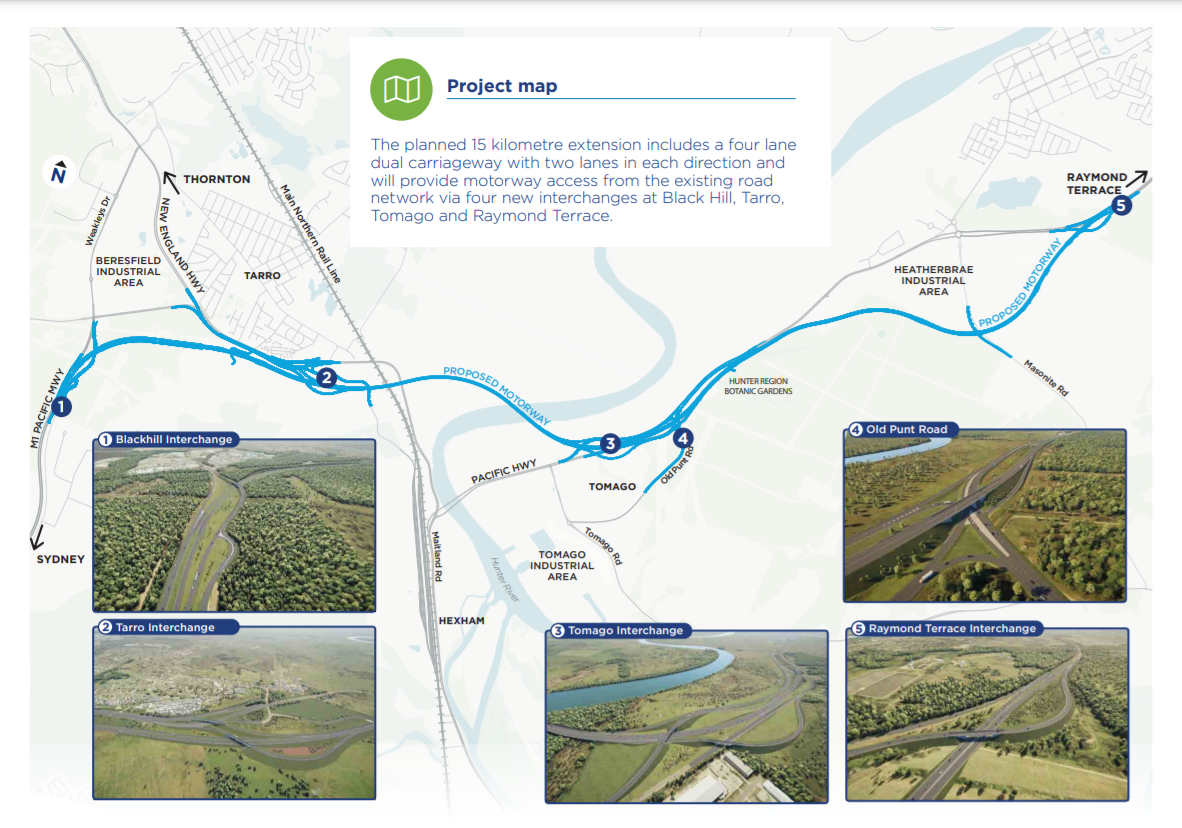 The project is going to be delivered through two collaborative design and construct contracts, namely the Southern Package and Northern Package.

The Southern Package from Black Hill to Tomago will include:

The Northern Package or Heatherbrae Bypass will include:

“The project includes 15 kilometres of motorway with two lanes in each direction, and provides motorway access from the existing road network from four new interchanges at Black Hill, Tarro, Tomago and Raymond Terrace.

“This will provide improved access for these key employment areas with the Port of Newcastle and Greater Newcastle, delivering substantial economic benefits for the region,” Liberal Patron Senator for the Hunter Region Hollie Hughes said.

For more information on the Registrations of Interest notice, you can check out the NSW Government eTendering pages for the Southern Package and Northern Package.

Once completed, the project will improve connection between the M1 Pacific Motorway and the Pacific Highway as well as provide motorists with better traffic flow, accessibility to the surrounding road network and safety for all road users.

“Discussions with the construction industry were held as part of the Market Interaction Process, which provided valuable insights into the views of the industry and helped to determine the best delivery approach for the project.

“Transport for NSW will work with shortlisted tenderers, and then the successful contractors, to consider and incorporate innovations proposed by industry, ensuring value for money delivery of the project benefits,” New South Wales Parliamentary Secretary for the Hunter Taylor Martin said.

The M1 Pacific Motorway extension to Raymond Terrace project in New South Wales takes another step closer to being built with the Environmental Impact Statement (EIS) submission report released to the public for viewing.