Real progress made on $4.3bn Woolgoolga to Ballina upgrade

If you've traveled the northern coast of New South Wales in the past few months, you'll know that the Pacific Highway is a beast of a project, with construction marking a significant section heading south. Deputy Prime Minister for Infrastructure and Regional Development Warren Truss confirmed earlier in the week that progress on the Pacific Highway upgrade is well underway with new access roads, realignments and rockblasting along the first 26 of the 115 kilometres between Woolgoolga to Ballina.

The $4.3 billion project is Australia’s largest regional infrastructure project. NSW Roads and Maritime Services will deliver the project using a Delivery Partner model similar to the approach used for the construction of the London Olympics infrastructure.

The upgrade project was first approved on June 2014, and in June 2015, the Pacific Complete consortium, comprising two firms with extensive experience in delivering Australia's most complex infrastructure, Laing O’Rourke and Parsons Brinckerhoff, were identified as the preferred Delivery Partner for the NSW Government’s Woolgoolga to Ballina Pacific Highway upgrade. 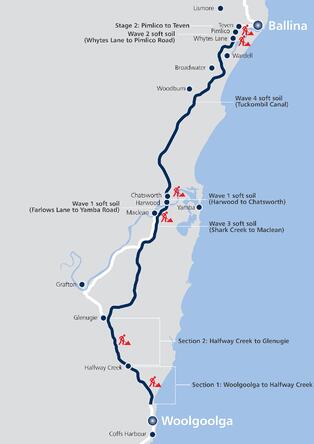 Once the upgrade works are completed, transport operators and other motorists can expect reduced travel times and fuel costs on a daily basis.

However,  over the next three months, both residents and motorists can expect major changes to traffic between Woolgoolga and Glenugie.

“More than 30 per cent of earth required to be relocated has already been moved and some sections are ready for road gravel. Controlled rock blasting at Glenugie and Dirty Creek range will continue, with rock to be crushed and used elsewhere along the project.” – Mr. Duncan Gay

A four-lane divided highway between Brisbane and Sydney will be the result of the upgrade. Not to mention the creation of local jobs as well as improved local amenity and access said Federal Member for Page Kevin Hogan.

Due to changed traffic conditions, motorists should abide to the reduced speed limits and follow traffic control directions as informed by Roads and Maritime Services.

The works being delivered is a partnership with the New South Wales Government and it is set to improve overall road safety commented Federal Member for Cowper Luke Hartsuyker.

“The 155 kilometre Woolgoolga to Ballina section of the Pacific Highway upgrade is on track to open to traffic by the end of the decade, weather permitting, and is being jointly funded by the Australian and NSW governments on an 80:20 basis.” – Mr. Luke Hartsuyker

Through traffic separation, road safety will be improved and it will also provide an increase in rest opportunities for drivers.

Mr. Hartsuyker said that the Pacific Highway upgrade will create up to 2,500 direct jobs as well as 7,500 indirect jobs on the Woolgoolga to Ballina section.

“The Pacific Highway Upgrade is providing so many job opportunities on the North Coast; local jobs for local people,” Mr. Luke Hartsuyker 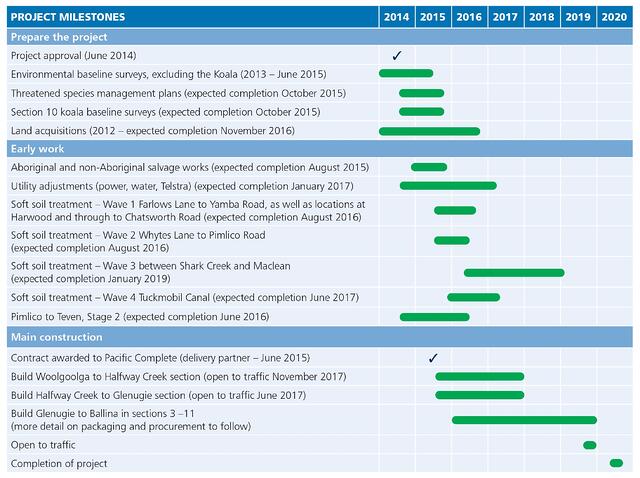 Construction will be completed and roads will be fully opened to traffic by 2020.

Author's note: Information on this post was sourced from infrastructure.gov.au and nsw.gov.au

A major milestone has been marked on the final stage of New South Wales’ WestConnex project - the $7.247 billion M4-M5 Link - with the announcement of a successful tenderer for the construction of the mainline tunnel.

The $16.8 billion WestConnex motorway development project has reached another milestone with the planning application lodged for the much-anticipated final stage of the project. The third and final stage involves the crucial link between the M4 and M5 corridors.

$3.5bn worth of new rail projects across QLD to support over 5000 jobs

Through the 2022-23 State Budget, the Queensland Government is committing $3.5 billion towards a pipeline of new rail projects to support the State’s growing population.