The Inland Rail that will connect Melbourne to Brisbane is Australia’s largest freight rail infrastructure project to date, and its development is progressing well. Due to the size of the project, it has been the talk of builders from across the country.

About the Inland Rail

The Inland Rail is a 1,700-kilometre freight line running between Melbourne and Brisbane via regional Victoria, New South Wales and Queensland. The estimated cost to build the project currently sits at $10.9 billion, with the Australian Government contributing approximately $8.4 billion – as part of the Federal budget 2017-18 – to develop and construct the Inland Rail. Additional funding for the project will come from private sector partnerships.

The Australian Rail Track Corporation (ARTC), in partnership with the private sector, will be delivering the Inland Rail project.

Inland Rail is going to be delivered in 13 different projects – seven in NSW, five in QLD and one in VIC. The delivery of the Inland Rail is expected to support approximately 16,000 jobs during peak construction and, once operational, up to 700 jobs will be generated.

Major construction on the Inland Rail is set to commence this year, with the first train expected to operate on the corridor by 2024-25.

Once completed, transporting freight will become 10 hours faster via the Inland rail compared to the existing coastal rail network via Sydney.

The Parkes to Narromine project

In September 2017, Registrations of Interest were called to build the 107-kilometre P2N section of the Inland Rail. In December of the same year, Liberty OneSteel Whyalla Steelworks was awarded a $20 million contract to produce 14,000 tonnes of steel rail that is required to build this section of the rail line.

“This order is the first of approximately 262,000 tonnes of steel needed to build Inland Rail – which is equivalent to five Sydney Harbour Bridges,” Minister for Infrastructure and Transport Darren Chester said on a previous statement.

In January 2018, the first delivery of steel rail has been delivered for the P2N project. 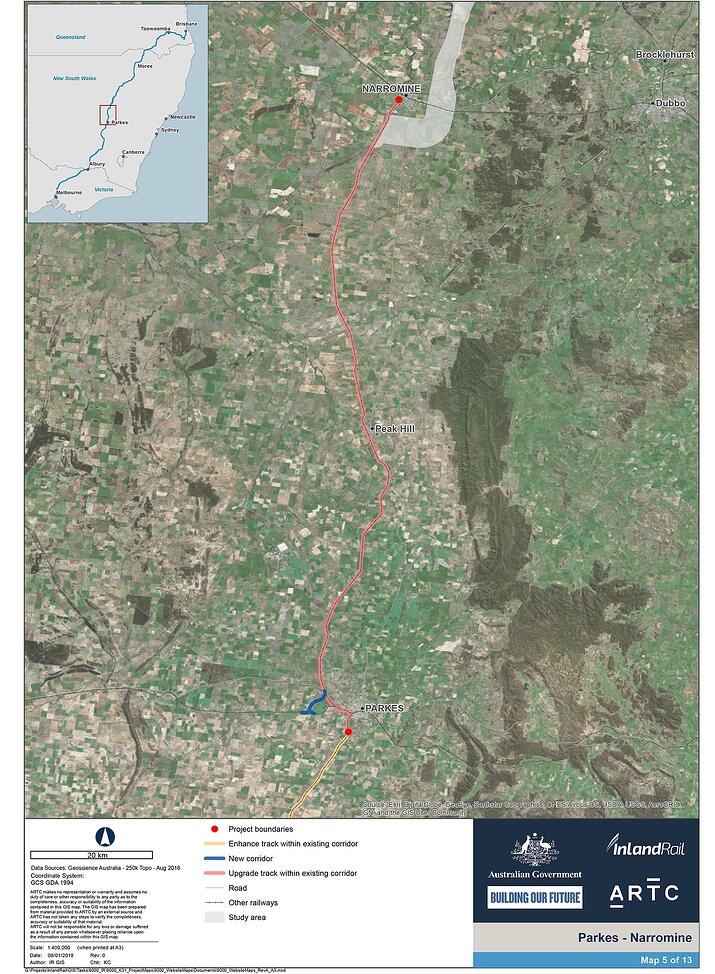 The P2N project – which is one of the 13 projects that will complete the Inland Rail – will involve upgrading an existing rail corridor and the construction of approximately 5 kilometres of new rail at Parkes.

Works on this project will include:

This project will also include building crossing loops at areas certain areas on the corridor to allow trains to pass each other as well as work on level crossings, signalling and communications, signage, fencing, and utilities along the P2N section.

What are your thoughts on the Inland Rail project? Let us know in the comments section below.

Don’t forget to subscribe to Felix Project News today to receive the latest Inland Rail and other industry news straight to your inbox.

Plans of a massive underground rail network project - valued at $50 billion - has been revealed by the Victorian Government. The Suburban Rail Loop is set to become Australia’s largest public transport project in history.

The development of Inland Rail across regional Australia is continuing to progress, creating significant opportunities for local businesses as well as supporting jobs and boosting the economy in addition to delivering a 1,700-kilometre rail link between Melbourne and Brisbane.