The Northern Territory Government has signed a “milestone agreement” with Sun Cable which will get the ball rolling on the development of the proposed $22 billion Australia-ASEAN Power Link (AAPL).

With this agreement, the Territory will host one of the world’s largest solar farm and renewable energy system as well as see approximately $8 billion in investments.

“Today’s announcement is a big step forward for the Territory – for our energy security and our job security.

“This project will put the NT on the international map when it comes to renewables,” Chief Minister Michael Gunner said.

The signing of the Project Development Agreement will pave the way for the NT Government and Sun Cable to work closely to finalise land tenure and commercial arrangements prior to the project’s financial close.

“Locals can look forward to affordable energy that’s reliable and renewable by the end of the decade,” Minister for Renewables and Energy Eva Lawler said.

The massive renewable energy project – which will comprise of a solar farm and a 30GW battery storage facility – is going to be built on a 12,000-hectare site in the “sun-soaked” Barkly region near Elliott.

This project will also deliver a 4,500-kilometre transmission system that will link Darwin, Singapore and ASEAN markets to a reliable and competitively priced source of green power. 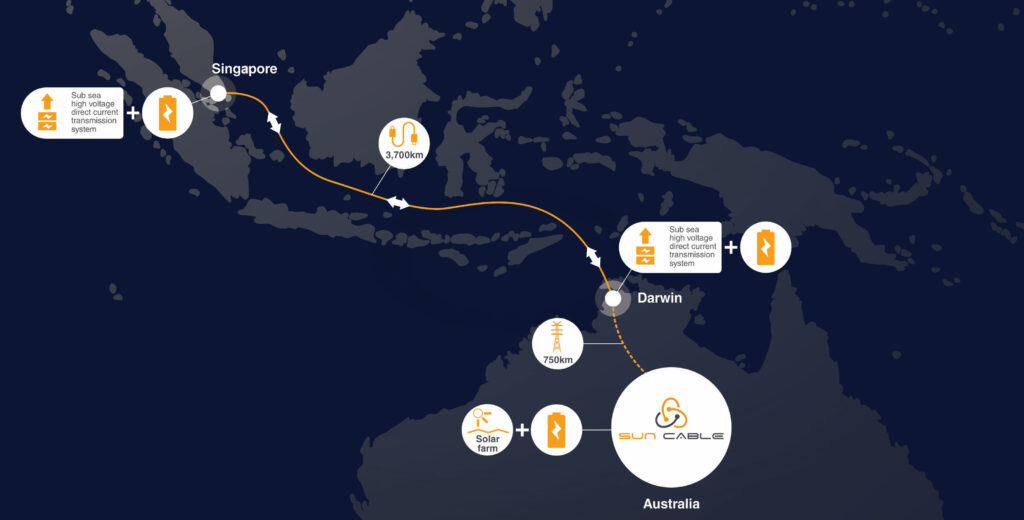 The Australia-ASEAN Power Link project will also capitalise on the nearby access to road and rail in addition to the location’s sunny, cloud-free benefits.

This multi-billion-dollar project is expected to create 1,500 jobs during its construction phase and a further 350 ongoing positions once the facility is up and running.

“It will also see hundreds of Territorians find work in the Barkly and Darwin regions during the construction and operational phases.

“Territorians are already seeing the benefits of this investment, with Sun Cable hiring more than a dozen Darwin firms for initial works.

“This project will transform the Territory into a renewable energy powerhouse, and cement our position as Australia’s comeback capital,” Chief Minister Gunner said.

Construction is due to commence once financial close is reached in October 2023.

This project has the potential to provide reliable and affordable electricity as well as open an opportunity for a green manufacturing hub in Darwin.

Once operational, the Australian-ASEAN Power Link is estimated to export approximately $1 billion worth of solar power annually and supply about 20 per cent of Singapore’s electricity.

“This will provide affordable, reliable energy to support industrial growth in Darwin, as well as supplying up to 20 per cent of Singapore’s electricity needs,” Sun Cable CEO David Griffin said.

Motorists in Melbourne’s northern and south eastern suburbs are one step closer to experiencing safer and less congested travels along arterial roads, with the announcement of three shortlisted builders to deliver the Victorian Government’s $2.2 billion Suburban Roads Upgrade.

The Armadale Access Alliance - a joint venture between Laing O’Rourke and BG&E - has been awarded a $134 million contract for the delivery of the Armadale Road to North Lake Road Bridge, taking the project one step closer to construction.