A new western alternative to the Bruce Highway between Brisbane and the Sunshine Coast in Queensland is a step closer to being built with a preferred option already identified for Stage 1.

The Australian Government is committed to delivering critical road projects across the State, including this Bruce Highway project.

“With growing population pressures across the Moreton Bay region, a new, alternative road connection to the west of the Bruce Highway will help boost the capacity of the local road network and reduce congestion.

“The Bruce Highway Western Alternative project is one of many critical infrastructure projects to receive funding from the Morrison Government as part of its record $110 billion, 10-year infrastructure investment pipeline, which is helping to drive Australia’s economic recovery,” Federal Minister for Communications, Urban Infrastructure, Cities and the Arts Paul Fletcher MP said.

A phased consultation approach has been established for this project, with the first phase for Stage 1 works recently completed.

“Community consultation is an important part of major projects like this, to make sure we are delivering the best outcome for the community.

“Through technical investigations and community feedback, the preferred corridor for Stage 1 has been identified from Moodlu to Moorina within the future Caboolture West development area,” Queensland Deputy Premier and Member for Murrumba Steven Miles said. 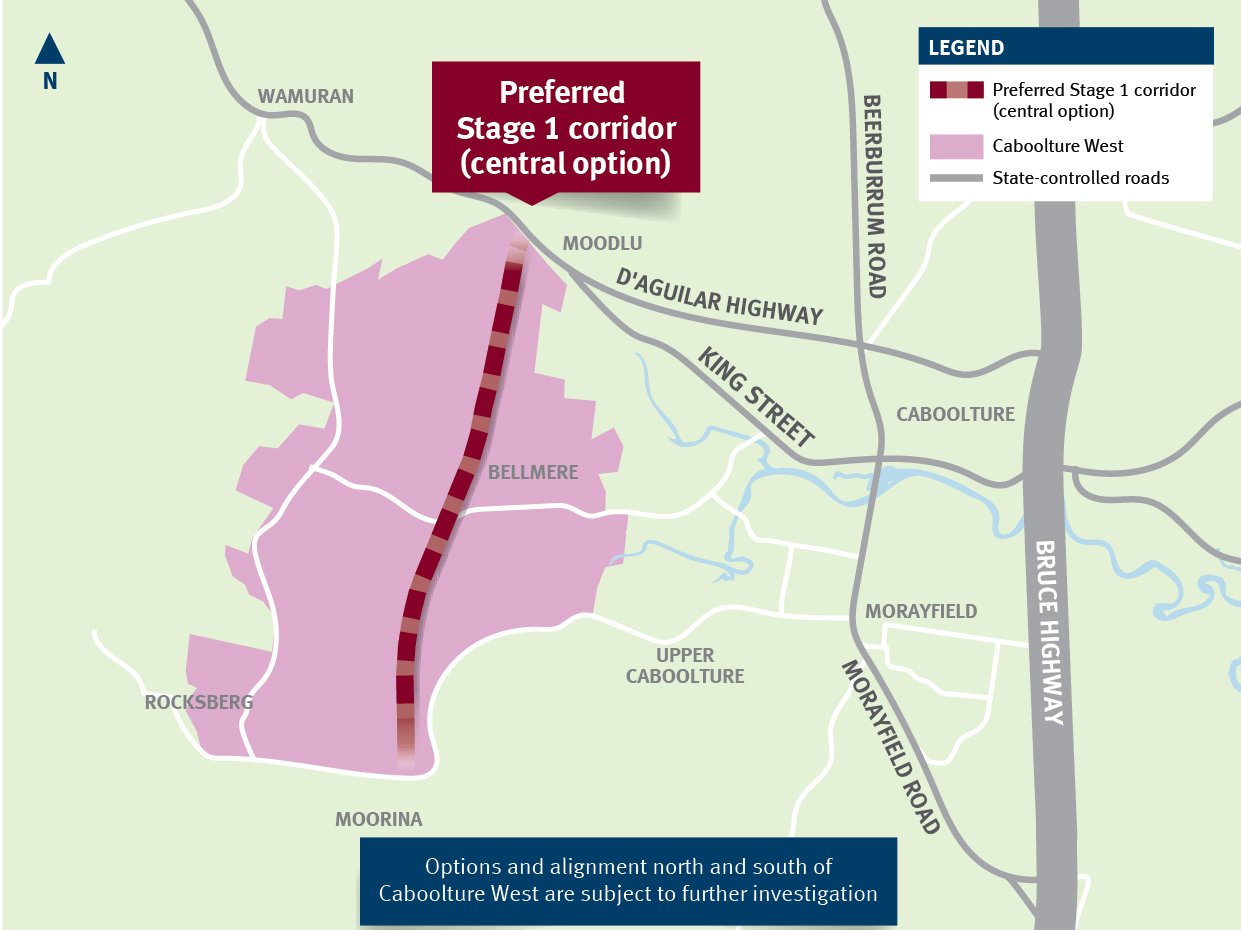 Out of the three options presented, the community has chosen the central option for the new road corridor. The central option will begin from the D’Aguilar Highway, travelling towards the south to Caboolture River Road and staying close to the existing power easement.

Several significant technical merits have been considered for this option as well as key high-level considerations including:

“The corridor will provide for future interchanges and allow local roads to pass over ir under the new road. 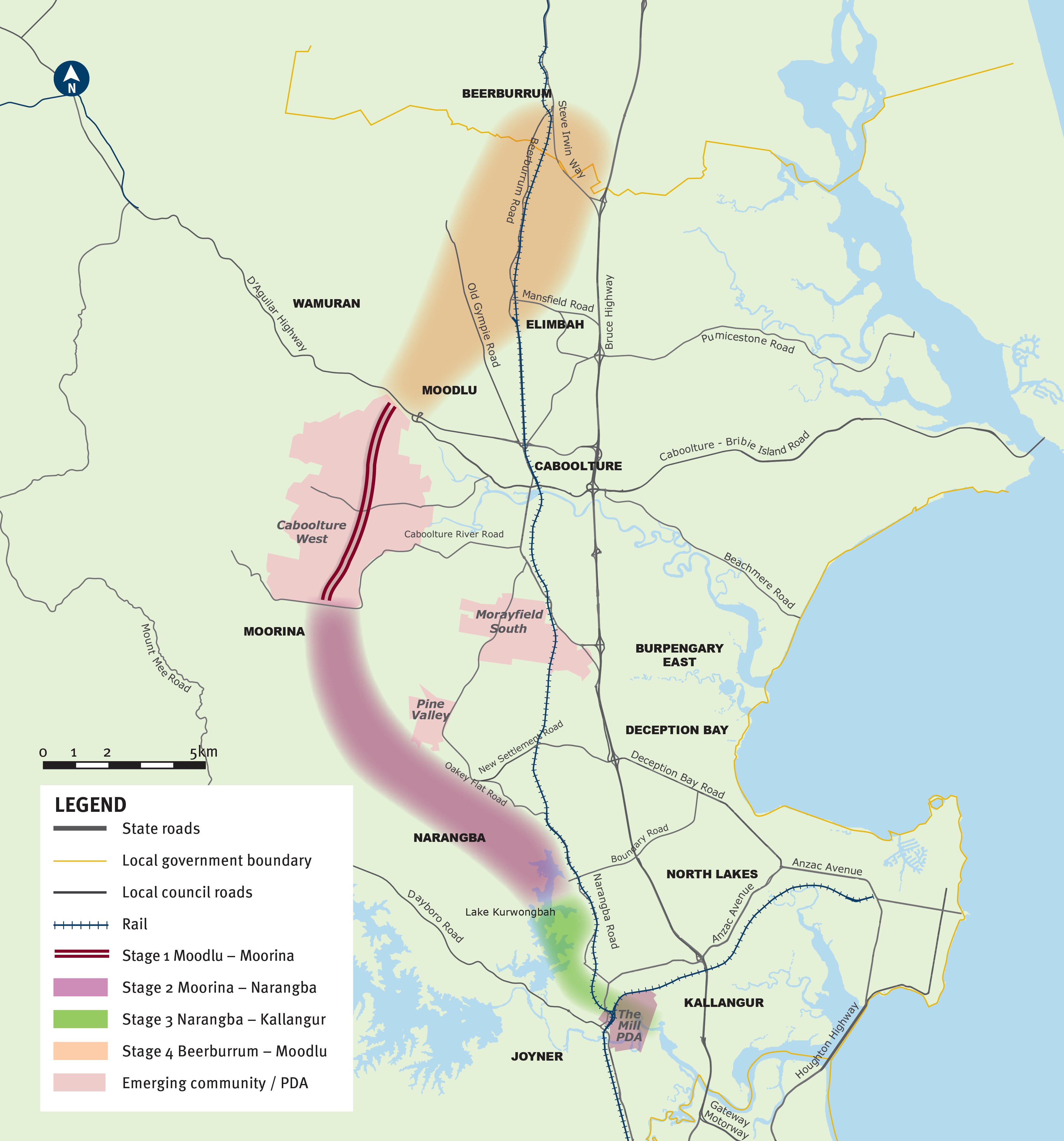 The project team will continue working closely with the Moreton Bay Regional Council as well as the Department of State Development, Infrastructure, Local Government and Planning’s Growth Areas Team to ensure that this Bruce Highway project will tie in with the current structure plan for the Caboolture West development.

With the population in Caboolture West expected to grow in the coming years, the demand for roads in the region is also expected to increase and the delivery of the Bruce Highway Western Alternative will provide the region with the road it needs.

“We might’ve won the bid to host the Olympic Games in 10 years’ time, but the demand for infrastructure is happening now. This is our second M1, our Coomera Connector – and to check off this milestone, means we can hopefully have shovels in the ground sooner.

“The Bruce Highway is the spine of Queensland’s road network and Moreton Bay is positioned at its most critical point, which is why it’s vital we build a road that takes local traffic off this major freight route.

“If you get an alternative road up, you can take local traffic off the state’s biggest highway and accommodate the 70,000 people that’ll be moving here,” Moreton Bay Regional Council Mayor Peter Flannery said.

Funding to deliver major Bruce Highway upgrades have already been locked in from both the Australian and Queensland Governments.

Planning is also underway for the next stages of the Bruce Highway Western Alternative project, which will be delivered as part of a record $27.5 billion roads and transport budget.

“We are working closely with the Moreton Bay Regional Council to consider development pressure and understand future needs of the region as we prioritise future stages of the route.

“The next priority stage (Stage 2) is south of Caboolture West from Moorina to Narangba and is around 13 kilometres long.

“Consultation is expected to start for Stage 2 early next year (2022), however in the meantime the community can provide early feedback on future stages through the project webpage.

Victoria’s $375 million Mordialloc Freeway project progresses towards construction with the release of an Environment Effects Statement (EES) for public consultation. Locals are invited to share their feedback regarding the project.

McConnell Dowell has signed an Early Contractor Involvement (ECI) contract with the BHP Mitsubishi Alliance (BMA) for works on the Shiploader 2 and Berth 2 Replacement (SABR) project at the Hay Point Coal Terminal in Queensland, near Mackay.