The Queensland Government is supporting the development of a new 252MW wind farm and the creation of more than 200 jobs as it commits $192.5 million towards the Wambo Wind Farm project.

This significant investment is part of the #2 billion Renewable Energy and Hydrogen Jobs Fund.

Once up and running, the Wambo Wind Farm will help drive electricity prices down as well as provide cleaner energy.

“It powers more jobs, it created more industries and it supercharges our resources sector with the demand for new minerals.

“This is part of our commitment to achieving 50 per cent of our energy needs from renewable sources by 2030 and net zero emissions by 2050.

“Our Renewable Energy and Hydrogen Jobs Fund has done exactly as its name suggests – it's delivering jobs for Queenslanders,” Premier Annastacia Palaszczuk said.

According to Treasurer and Minister for Trade and Investment Cameron Dick, committing in the Wambo Wind Farm project is a ‘smart investment decision’ for Queensland.

“We’re providing Queensland businesses with the certainty they need that cheaper, cleaner renewable energy will be available as they expand and grow,” the Minister said.

The State’s publicly owned energy company Stanwell will own about 50 per cent of the development, which means Queenlanders will also own this much of the Wambo Wind Farm.

“Across Queensland’s Renewable Energy Zones we are ensuring that communities are at the forefront of planning, giving locals more say on renewable energy developments.

“Progression of our projects will be conditioned on accessing local supply chains, employing locals, including apprentices and trainees.

Renewable energy projects such as the Wambo Wind Farm will help Queensland reach its 50 per cent Renewable Energy Target.

Minister de Brenni added that work is progressing well on the State’s 10-year energy plan, which is expected to support more wind and other renewable projects across the region.

“The largest employers on the planet are demanding emissions-free energy and that’s what the Palaszczuk Government will deliver because we understand that diversifying our energy system brings those employers to our state and that equals more jobs for Queenslanders,” Minister de Brenni said. 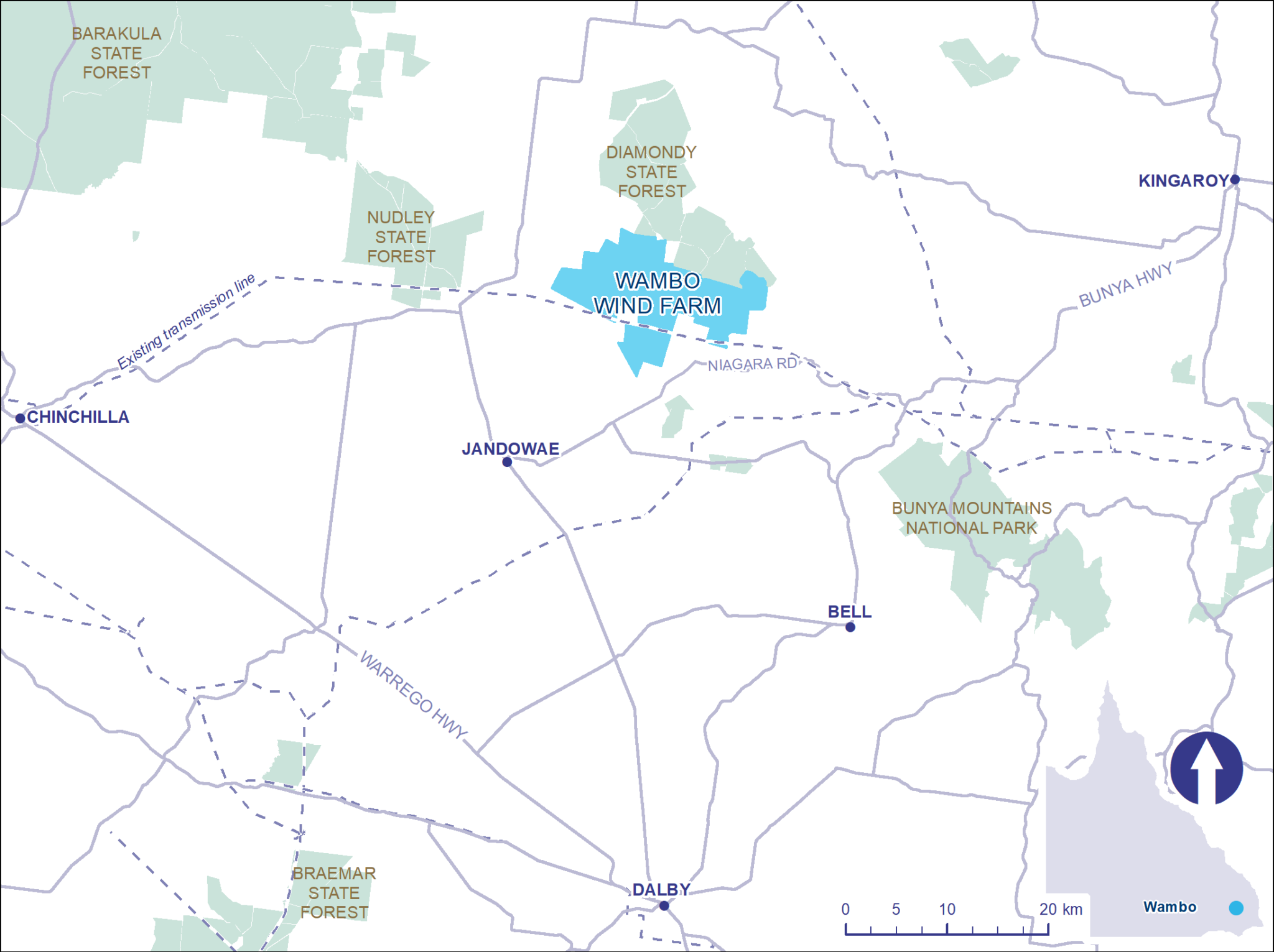 The Wambo Wind Farm project is going to be built near the Bunya Mountains, about 200 kilometres North West of Brisbane, in the western downs region of Queensland.

The proposed wind farm is going to be delivered in stages, with the first stage consisting of up to 42 turbines and generating circa 250MW of clean energy into the National Electricity Grid.

Stage 2 of the Wambo Wind Farm project is dependent on the outcome of feasibility studies as well as grid availability. The second stage development is anticipated to deliver an additional 300MW of renewable energy to the grid.

The Wambo Wind Farm project would potentially be delivered through a joint venture with Cubico.

“We are looking to potentially operate and maintain the project once it’s built, so there may be new positions as well as opportunities for existing Stanwell employees to gain skills and experience in renewables,” Stanwell Chief Executive Officer Michael O’Rourke said.

The joint venture between McConnell Dowell and John Holland (MDJH-JV) has signed an agreement with Genex Power to begin early works on the 250MW Kidston Pumped Storage Hydro project (K2-Hydro) in North Queensland.