A congestion-busting project that will fix the bottleneck on Beams Road near Carseldine train station in Queensland is a step closer to becoming a reality as the State Government invests $128 million to deliver this vital project.

"The local community and anyone who drives on Beams Road around Carseldine will have been caught at the bottleneck around the rail line.

"Every time that boom arm goes down at the Beams Road level crossing, that means more time for people waiting in traffic," Premier Annastacia Palaszczuk said.

In addition to the State Government's funding commitment, the Beams Road project is also supported by a $70 million investment from Brisbane City Council and $50 million from the Australian Government.

"This funding won't just finally deliver a fix for the level crossing, but it will cover a precinct-wide plan for more commuter parking and upgrades to the surrounding road network.

"There are also opportunities ahead to build new public spaces and upgrade the road network as part of Carseldine Urban Village, so this project will build on that and transform how [our] community connects," Member for Aspley Bart Mellish said. 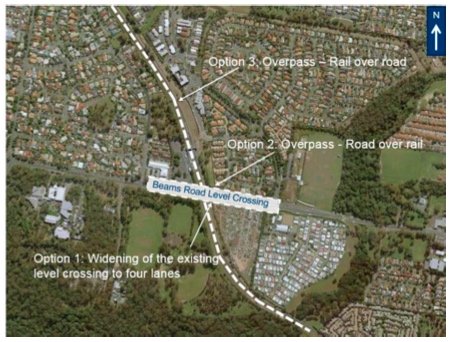 According to Queensland Treasurer and Minister for Infrastructure and Planning Cameron Dick, the State Government will be investing on strategic projects that will be beneficial for the local community.

"As we unite and recover from COVID-19, we want to make sure our investments will deliver for generations to come," Minister Dick said.

The funding commitment from the three levels of government will not only deliver a congesting-busting plan for Beams Road but will also deliver a precinct-wide transport plan.

"The Palaszczuk Government's commitment will cover the majority of $248 million cost to deliver the Beams Road transport plan.

"Work on a business case for the level crossing removal will finish early next year, with construction to start later in 2021.

"We'll keep the community informed each step of the way and, while they will have to wait a bit longer, the wait will be worth it," Transport and Main Roads Minister Mark Bailey said.

Plans to remove level crossings across the Armadale Line in Western Australia is moving forward with the release of tenders for work on the METRONET project that will bust congestion along the rail line.

Works are set to begin in 2018 on a $588 million level crossing removal project that will remove more congested and dangerous level crossings along the Frankston Line in Victoria.

Three level crossings in Chelsea VIC fast-tracked to be removed

Three dangerous and congested level crossings in Chelsea, Victoria are being fast-tracked to be removed to help reduce disruptions on the Frankston Line as well as improve traffic flow in the south east.