Thousands of new jobs in regional Queensland have come a major step closer with Queensland Government approval of the mining leases for the $21.7 billion Carmichael coal mine and rail project in the State’s Galilee Basin.

The Queensland government has cleared the last major state hurdle for the Indian miner to proceed with its $21.7 billion mine - which would be Australia's largest - rail and port project in the Galilee basin and at Abbot Point.

The three mining leases, 160km north-west of Clermont --- 70441 Carmichael, 70505 Carmichael East and 70506 Carmichael North --- are estimated to contain 11 billion tonnes of thermal coal. They provide for mining and the development of infrastructure such as haul roads, buildings, workshops, power lines, workers’ camp and pipelines.

Premier Annastascia Palaszczuk announced the approval as a major step forward for this project after extensive government and community scrutiny. "We are talking about thousands and thousands of jobs - 5,000 jobs from this project during construction and another 4,500 during the peak of its operations - it means jobs for local people as well,' she said.

From a plant hire perspective, it will mean an exodus of yellow goods to Central Queensland, including large excavators, large haul trucks, small haul trucks, dozers, loaders and more.

Overall, the coal, rail and port project now had 19 permits and approvals at local, state and federal level, including nine primary approvals from the State and Commonwealth Government. 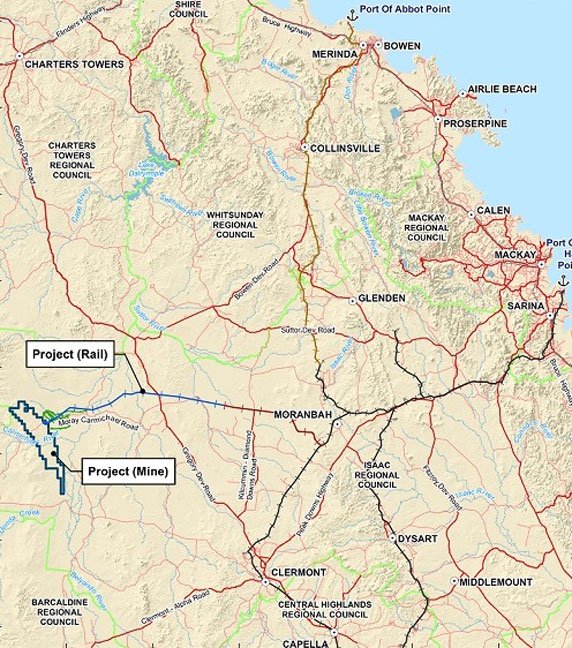 Image: A map showing the Adani Group mine a rail project.

The approval is also expected to pave the way for other miners in the Galilee Basin to bring projects online, creating further jobs and pouring billions into the state’s economy, with Adani’s coal mine alone tipped to bring in between $200 to $300 million a year in royalties.

Adani welcomed Sunday's decision, with the company saying in a statement it aimed to start work in 2017. However, Adani also made clear that it won't make a final investment decision until it has secured outstanding approvals and legal challenges by "politically-motivated activists" are resolved.

"The granting of a mining lease helps deliver the company certainty with respect to timelines, while moving to the next phase of the project, subject to the resolution of legal challenges by politically motivated activists," a company statement said.

"The next phase of the project, following this key approval, will see a return to the pre-engineering work that had to be suspended in 2015 with the loss of certainty on approvals timelines that had occurred at that time.

"Concurrent with that, the company will continue to finalise second-tier approvals, with the clear aim of commencing construction in calendar year 2017." 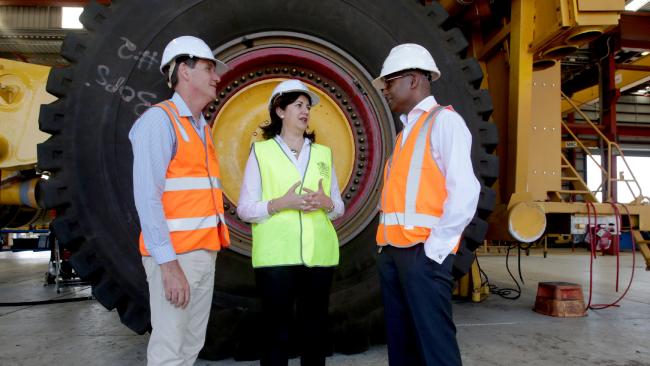 Image: Mines minister Anthony Lynham and Premier Annastacia Palaszczuk in Mackay with Adani CEO Jeyakumar Janakara to announce the go ahead of the Carmichael Mine by Indian company Adani. Image: Tim Marsden

Carmichael Mine next steps

Minister for Natural Resources and Mines Dr Anthony Lynham reported that "a number of other steps have to be completed before mine construction can start”, including secondary approvals for rail, port facilities, power, water, roadworks and the airport and a financial assurance with the Department of Environment and Heritage Protection.

Adani’s Australian CEO Jeyakumar Janakaraj said he believed those approvals would be gained this year.

“I think all of the secondary approvals will take place within this calendar year and we hope that construction would start any time in 2017,” Mr Janakaraj said.

No decision has been made yet as to when jobs might be advertised or how many would be fly-in, fly-out with the mine not close to any communities.

Project Spotlight: Adani Carmichael mine is given green light by Federal Government

The federal government has reapproved Adani Group’s plans for a major coal mine and rail line in Queensland, injecting momentum into a multibillion-dollar project that had snagged on environmental concerns and the global commodity price slump.

Adani's Carmichael mine in QLD to begin construction in 2017

Adani’s $21 billion Carmichael project north of the Galilee Basin is expecting to begin construction in 2017 after the Queensland Government decided to exempt it from new water legislation – one that states all mines under development should obtain a groundwater license.

Development of Adani Group’s Carmichael coal mine and rail infrastructure is set to go underway soon, with the Indian mining company announcing that it will fully fund the project itself.