In November 2017, Destination Brisbane Consortium – the project developers – awarded Probuild the contract to carry out the excavation and shoring works for the project.

Over the next two years, approximately 450,000 cubic metres of material is going to be removed from the site. Once excavation is completed, foundation works will begin to build a five-level basement with car park that will cater to the tourism, entertainment and resort development happening above ground.

“This basement excavation, only metres from the Brisbane River, is for the future superstructure. It requires nearly a metre-thick concrete diaphragm wall to be constructed, which will embed into the rock five basement levels down from Queen’s Wharf Road, to hold the river back from the excavation,” Probuild’s Queensland Managing Director Jeff Wellburn said.

As part of the works, Probuild will be installing soldier piles on three faces of the excavation together with soil anchors, mesh and concrete shotcrete that will stabilise the walls as excavation works get deeper into the ground. According to a statement from Probuild, an estimate of 45,000 truck movements are required for this excavation project.

Probuild was also involved in the demolition works for the Queen’s Wharf Brisbane development, which included the removal of three non-heritage former government buildings on site.

“Our involvement in the early stages of the project has seen us develop a thorough understanding of it – and we couldn’t be more honoured and excited to be delivering the next 18 months works,” Mr Wellburn said. 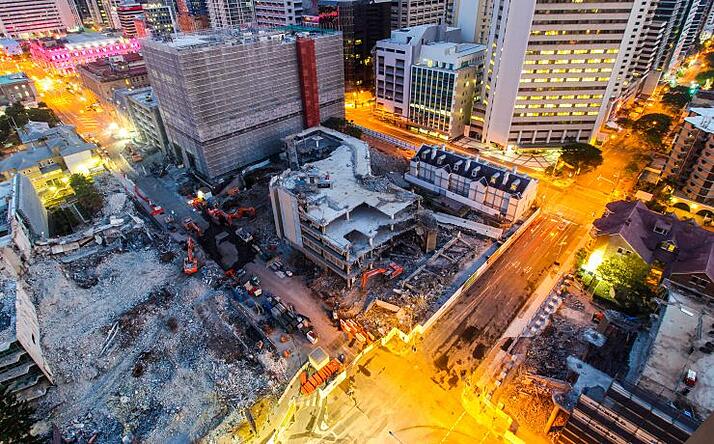 Excavation sites will be located on the former Executive Building, 80A George St building, and the Neville Bonner Building as well as underneath the section of William Street between those old government buildings.

According to Destination Brisbane Consortium Project Director Simon Crooks, the consortium will be working closely with Probuild to reinforce the safety standards set for the project as well as to make sure that disruption are minimised for local commuters, cyclists, pedestrians and residents.

Mr Crooks added: “Later this year we expect to go to tender for the next immediate phase of the project – construction – as we will need to start on foundations at the bottom of the excavation pit in order to build the five basement level structures for thousands of cars to park at our integrated resort.”

“It will be Australia’s best integrated resort, a world-class destination competitive with anything on offer in the Asia Pacific region, to attract domestic and international visitors who will contribute substantially to the Queensland economy.

The Queen’s Wharf Brisbane integrated resort is expected to open its doors to visitors in 2022.

Watch this space for the latest Queen’s Wharf Brisbane project update as well as other industry news by subscribing to Felix Project News.

Queensland’s Deputy Premier and Minister for Infrastructure, Local Government and Planning, Jackie Trad, confirmed yesterday that the QLD Government has formally adopted the development scheme for the renewal of the Queen’s Wharf Brisbane Priority Development area. This redevelopment project will set Brisbane to see a massive increase in jobs.

Early works have begun on the new Roma Hospital in Queensland

Work has begun on the $70 million new Roma Hospital, beginning with two early works packages. Early works include the full program of pathology refurbishment and relocation, with works expected to be completed by mid-December 2016.