The $1.176b contract to design, construct and maintain the Forrestfield-Airport Link in Perth has been awarded to SINRW, a joint venture between Italian company Salini Impregilo and local company NRW Pty Ltd.

The contract is to build the 8km of rail tunnels and 3 stations for the Forrestfield Line, as well as maintain the tunnel and civil structures for 10 years following completion.

Premier Colin Barnett confirmed that a recent payment of $490m from the Federal Government will help support the project.

The rail line will tunnel underground from a junction near Bayswater Station, under the Swan River and the airport, and out to Forrestfield. 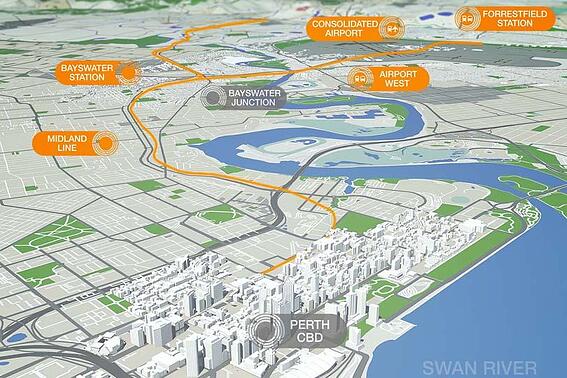 Early works on the biggest expansion of Perth's rail system since the Mandurah line in 2007 are already underway, including geotechnical work, contract management and land purchases.

SINRW is expected to mobilise on the site in the coming months and Transport Minister Dean Nalder estimates direct employment from the project to peak at 600 workers.

The rail line will give direct access to the airport by public transport and is due to open in 2020.

The $158 million two-tower development adjacent Perth Arena has been given the development approval by Planning Minister Rita Saffioti, and construction on the new buildings are expected to commence in mid-2019.

Work has started on the first private development on Elizabeth Quay in Perth. The $400 million 5-star Ritz-Carlton hotel and The Towers apartment building is expected to create 1,200 jobs throughout the construction phase.

The Western Australian Government will be investing approximately $1.7 billion through the 2019-20 State Budget to deliver projects that will improve road conditions in Perth’s eastern region as well as on the Tonkin Highway.