The joint venture between AJ Lucas and Spiecapag Australia, Spiecapag Lucas, has been awarded the construction contract for loopings 6–9 on APA Group’s Victorian Northern Interconnect Expansion (VNIE) Project. The project, which is part of APA Group's planned upgrade and expansion of its east coast gas grid in response to the transitioning gas market in eastern Australia, will increase the flow of gas from Victoria and New South Wales.

Contractor: AJ Lucas Managing Director and Chief Executive Russell Eggers said that the new contract with APA Group builds on their long term relationship of delivering their gas pipelines, which was highlighted recently with the completion on-time and on-budget of the 293 km Eastern Goldfields Gas Pipeline in Western Australia.

"This contract win is a further demonstration of our industry-leading experience, excellent safety record and strong client focus. It also extends our already established strategic partnership with Spiecapag Australia, which has been in place for more than 20 years.”

For the construction of Loop 6 - 9, Spiecapag Lucas’ full service execution will provide trench excavation, pipe welding, pipe placement and lay-in, surface protection and remediation of the right of way.

Loopings 6 - 9 for VNIE (originally appeared on the Australian Pipeliner):  The looping follows APA Group signing a gas transportation agreement to expand capacity of the Victoria – New South Wales Interconnect in July 2015. The multi-services agreement provides for the delivery of gas sourced from Victoria to the eastern Australian gas market for a term of seven years and will require looping on both the Moomba to Sydney Pipeline and the Victorian Transmission System, with the total cost of the expansion expected to be approximately ​AU$85 million.

Qube Energy has already commenced deliveries to the Benalla laydown yard, following the arrival of the first shipment of pipe at South Wharf, Victoria.

Construction is expected to be completed by the middle of 2016.

Victorian Northern Interconnect Expansion (originally appeared on the Australian Pipeliner): Running through grazing and cropping paddocks, across creeks, under roads and through small towns, the Victorian Northern Interconnect Expansion (VNIE) project is centred on the looping of sections of the existing 269 km 300NB Wollert to Wodonga Pipeline and is one of APA’s key projects in securing its east coast gas network.

The VNIE Project is comprised of three separable portions and installation of two valve station facilities:

The pipeline looping’s and associated facilities have been designed, constructed and will be operated in accordance with AS 2885.

The expansion project involves the construction of looping sections of the existing 300 mm Wollert to Wodonga Pipeline, with a new 400 mm transmission pipeline within APA’s existing gas pipeline easement. 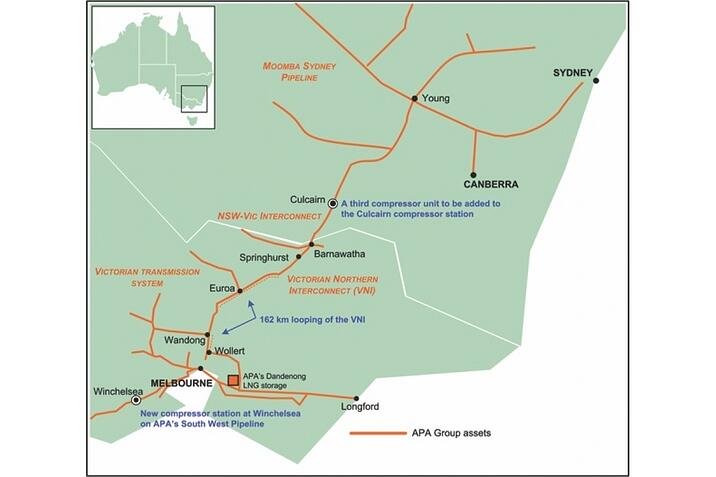 Through our involvement with their more recent Goldfields pipeline project, we know AJ Lucas projects like these offer great opportunities for suppliers to get their heavy machinery onsite.

For those looking to put their best foot forward, we’ve created a free eBook on how to create a strong business capability statement. The content of this eBook was developed from a QLD Government tendering workshop so be sure to download it below to get a thorough understanding of what's going to help your business stand out from the crowd.

If you'd like to learn more about getting your gear onto projects like these, get in touch and we'll show you how to better connect with your dream clients.

The contractor to deliver Australian Industrial Energy’s Port Kembla Gas Terminal (PKGT) in New South Wales has been announced, marking a new major project milestone following the grant of development approval at the end of April this year.

Central Coast Council is moving forward with the delivery of a $61 million pipeline project between Mardi and Warnervale in New South Wales with the construction contract awarded to joint venture partners Spiecapag Australia and Seymour Whyte.