Works are now underway on upgrades to two intersections as part of the $323.7 million Echuca-Moama Bridge project, which will deliver a new Murray River crossing between Victoria and New South Wales.

This is the fourth stage of the Echuca-Moama Bridge project and works will include: 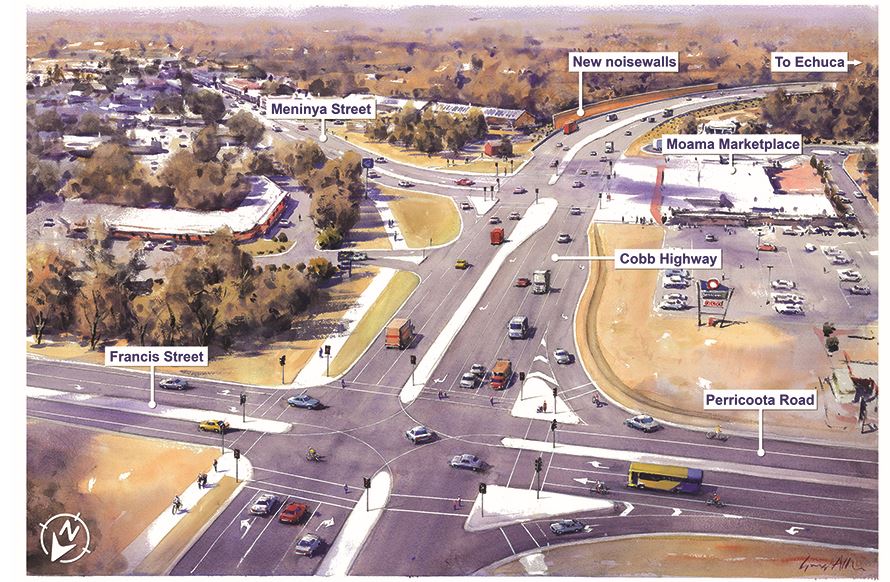 “This new bridge will make it quicker and easier for all road users to travel across the Campaspe and Murray Rivers and connect onto the Murray Valley Highway at Echuca and the Cobb Highway at Moama.

“In addition to the two intersections, the project includes a new roundabout on the Murray Valley Highway, the upgrade of Warren Street in Echuca, four new flood relief bridges and a new four-lane carriageway,” Deputy Prime Minister and Minister for Infrastructure, Transport and Regional Development Michael McCormack said.

Works on the Moama intersection upgrades are being undertaken by Excell Gray Bruni.

Minister for Regional Transport and Roads Paul Toole said that the intersection works will help improve safety and traffic flow as well as provide a key link to the new Murray River crossing.

“This is about delivering a smoother, safer and more reliable journey for freight operators and local motorists who cross the Murray River between Moama and Echuca every day.

“The new Echuca-Moama Bridge will replace the existing 142-year-old bridge and is currently under construction. Once complete, it will provide welcome relief for the local community,” Mr Toole said. 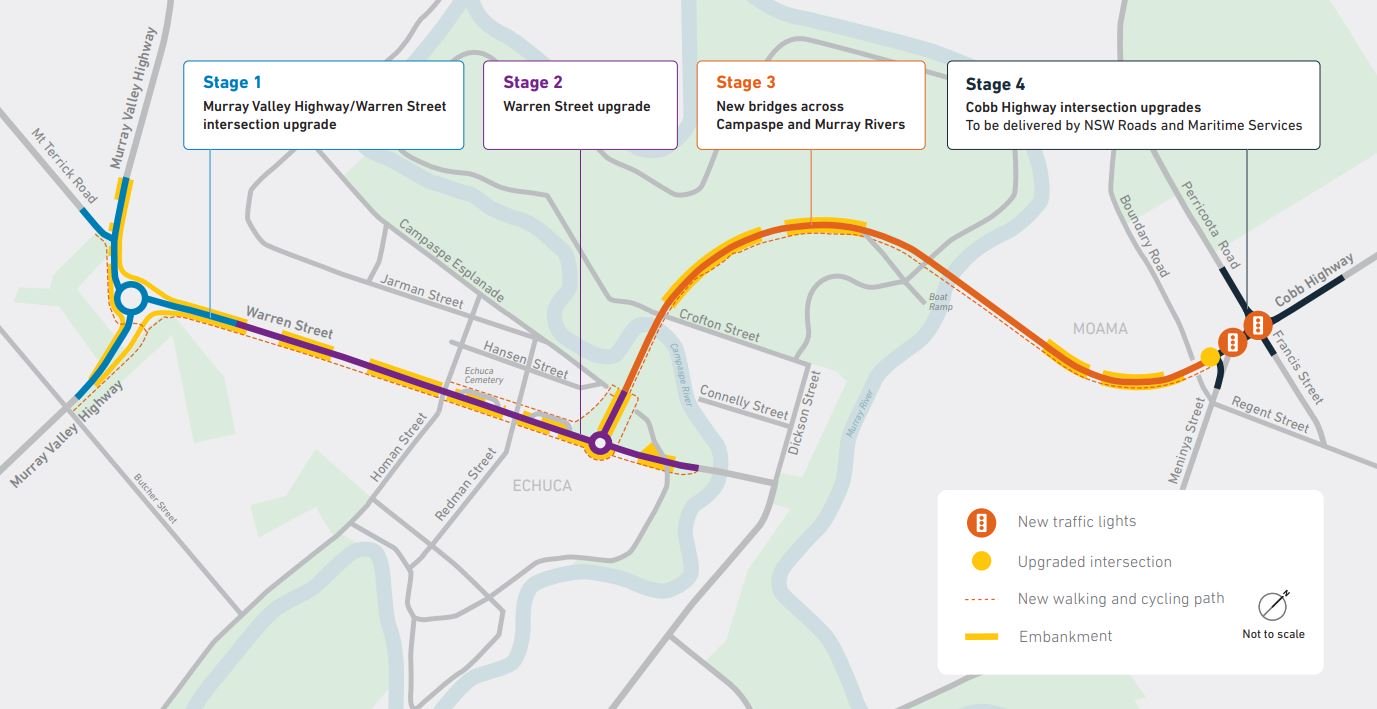 Once completed, the new Echuca-Moama Bridge will give a boost to the local and regional economy as well as provide all motorists with safer and more efficient travels over the Murray River.

“Whether it is businesses able to make cross-border deliveries more quickly of the 1,410 jobs to be supported, the flow-on benefits from the upgrade will be felt across the region,” Federal Member for Farrer Sussan Ley said.

“The new intersections will help traffic flow to the new bridge, providing safer and quicker movements for residents, visitors and the freight industry as they move across the Murray River between Moama and Echuca,” Federal Member for Nicholls Damian Drum MP said.

Weather permitting, works on the intersections are due to be completed in mid-2021.

The Echuca-Moama Bridge project is jointly funded by the Australian, New South Wales and Victorian Governments, each contributing $125.7 million, $87 million and $111 million respectively.

The delivery of the first three stages of the bridge project is being undertaken by Major Roads Projects Victoria, while the last stage - the two intersection upgrades - are overseen by Transport for NSW.

Early works has begun on the $280 million Echuca-Moama Bridge project, with test drilling for pylon placement underway for the much-needed second Murray River crossing. This project is jointly funded by the Australian, Victorian and New South Wales Governments.

A new Murray River crossing - between Victoria and New South Wales - is one stage closer to completion as the contract to deliver Stage 3 of the $323.7 million Echuca-Moama Bridge Project is awarded to McConnell Dowell Constructors (Australia) Pty Ltd.

Winslow Constructors has been awarded the contract to deliver major upgrades to Echuca’s Warren Street as part of Stage 2 of the Echuca-Moama Bridge project. Construction on the $26.35 million project is set to commence shortly following the contract award from the Australia, Victorian and New South Wales Governments.