The Star Entertainment Group has further confirmed its commitment to the Gold Coast by designing a master plan of potential future developments for its iconic Jupiters property. Information sessions will commence this month about a proposed new 200 metre hotel and apartment tower, construction of which could commence in 2017, and would take the current $345 million redevelopment at Jupiters to a potential mega-investment worth up to $850 million.

The Star Entertainment Group is currently working with the City of Gold Coast Council and State Government on necessary approvals for the proposed new tower and master plan concept.

The master plan concept provides for future development options potentially worth multiple billions of dollars with up to five hotel and/or apartment buildings, a world class recreational deck with water features, tropical gardens, pools and spa, and new entertainment facilities.

The master plan concept also looks at ways to enhance the connection of Broadbeach Island with Pacific Fair, the Gold Coast Convention Centre and the surrounding Broadbeach precinct. 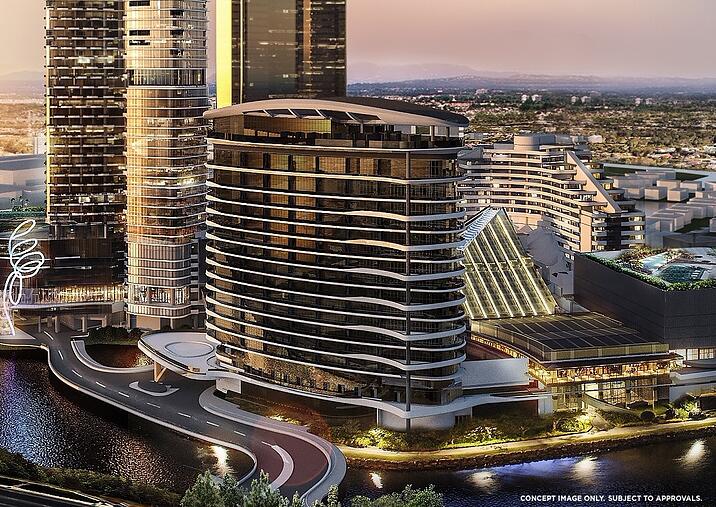 “Our aim is to be Australia’s leading integrated resort company and our plans for the Gold Coast are a significant part of that vision.

“This proposed master plan concept is about building on the exciting tourism forecasts we are seeing for the Gold Coast, with much-needed new infrastructure to deliver an international world-class integrated resort on the coast without the need for any additional poker machines.”

“We are firmly committed to the Gold Coast. We are already well advanced on transforming the property through the hotel refurbishment and new restaurants,” Mr Bekier said.

”Later this year we will rebrand to The Star Gold Coast as our new six-star all-suite tower takes shape.

“In March we signed a Memorandum of Understanding with our Queen’s Wharf Brisbane partners Chow Tai Fook Enterprises and Far East Consortium to co-invest in the proposed new tower and to investigate further development options in our master plan concept.

“This type of joint venture with our highly-credentialed partners has the potential to create a tourism asset on a significant scale that helps position the industry as an economic driver in Queensland.

“Importantly, with our vision for the Gold Coast together with Queen’s Wharf Brisbane, we will be able to leverage the unique tourism experiences both properties will offer. This will provide an even broader benefit to the south-east Queensland region as a whole by encouraging more visitors to stay longer.

Construction of the proposed new tower could start in 2017 and would be located on the ocean side of the existing property. The 700-room hotel and apartment tower would take the property’s overall accommodation supply to almost 1400 keys, creating a large-scale development on the Gold Coast for maximising tourism opportunities.

The exciting potential for the Gold Coast property builds on the existing $345 million project currently underway. This includes a full refurbishment of its almost 600 rooms and the construction of a six-star 17- storey all-suite tower at the front of the property.

It is expected that the proposed new 200-metre tower, together with the all-suite hotel where work is already underway, could generate more than 1000 construction jobs. Jupiters’ workforce would also need to increase to around 2300 employees once the projects were complete and the new areas operational.

It is envisaged the proposed new tower will feature a 4.5-star hotel, ensuring a breadth of price points, accommodation offerings, and universal tourism appeal at the property – with the existing upgraded hotel a five-star facility and the new all-suite tower to deliver on six-star quality and service. 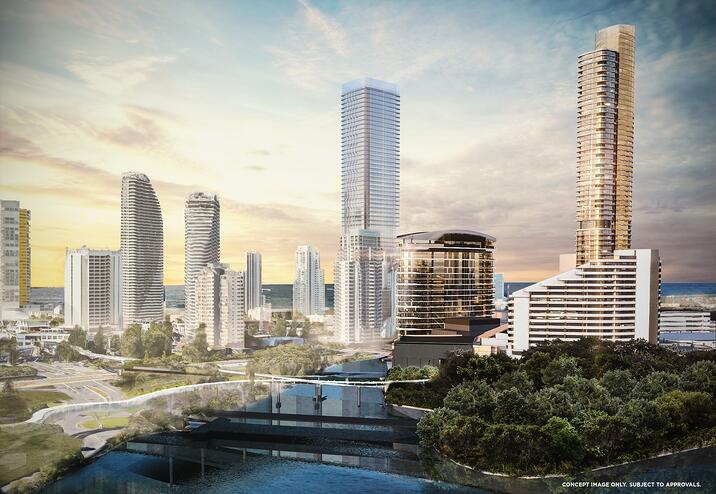 "This level of investment from The Star shows the confidence in our city and the broader south east Queensland region," reported Mayor of the City of Gold Coast Tom Tate. "It is a long-term vision and one we support as the Gold Coast matures into one of the most dynamic regional cities in the Southern Hemisphere. Residents, domestic and international visitors will enjoy incredible facilities and entertainment in this integrated resort as it evolves over the years."

"People are visiting Queensland in record numbers. To cater for increasing visitors, there is an estimated $11 billion in planned investment in accommodation and facilities, including more than 3000 extra hotel rooms," said Queensland Premier Annastacia Palaszczuk. “Stage one of the proposed redevelopment is undergoing formal approval process. The Star Entertainment Group is working closely with my Government.”

The community information program will run from 16 May to 9 June, and will consist of newsletters to nearby businesses and residents, an online survey and community drop-in sessions on 28 May.  Details on a broader master plan concept for the site will also be shared.
For ongoing updates on the Star Entertainment Group projects in SEQ, subscribe to Felix Project News.
SOURCE: Media Statement by The Star Entertainment Group & Premier Annastacia Palaszczuk.

The Western Australian Department of Mines, Industry Regulation and Safety has given the final approval to the development of the Yamarna Gas Pipeline (YGP).

The Australian Rail Track Corporation (ARTC) has marked a new milestone on the $400 million Port Botany Rail Line Duplication and Cabramatta Loop Project with the awarding of two major contracts.