The Queensland Government has committed approximately $351 million to get works going on the next stage of the Gold Coast Light Rail project, which will extend the light rail by seven kilometres between Broadbeach South to Burleigh Heads as well as build eight new train stations.

“This next stage is vital to creating even more jobs, connecting the southern Gold Coast to the rest of the line and getting even more people onto public transport.

“If we get shovels in the ground as soon as possible it will take around 3 years to build Stage 3A, with the possibility of trams operating to Burleigh Heads in 2023,” Premier Annastacia Palaszczuk said. 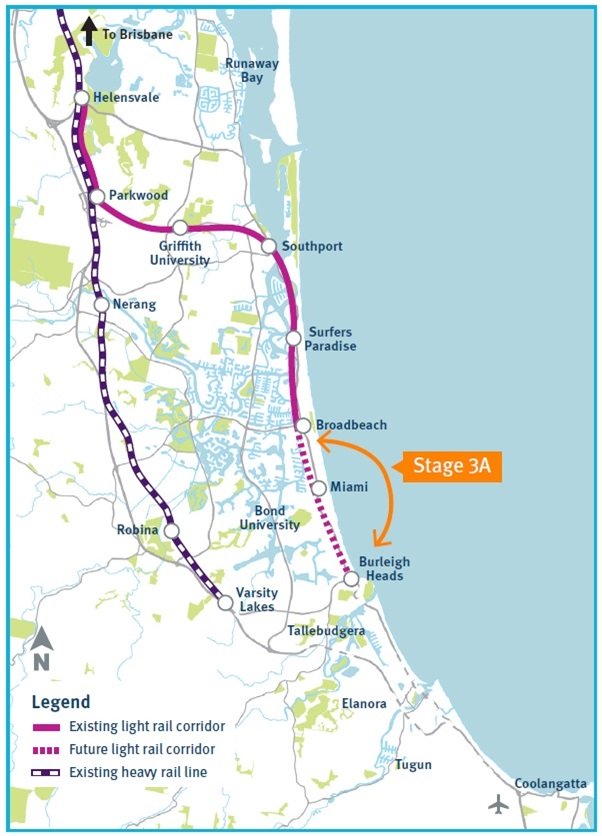 This stage of the Gold Coast Light Rail development is anticipated to create more than 760 jobs during construction.

This funding announcement follows the celebration of G:link’s fifth year in operation where it served more than 42 million passengers.

“It’s proven itself as not only a huge positive for locals, but also for the tourism industry, with visitors from across the world getting onboard.

“Not only has Gold Coast Light Rail revolutionised public transport on the coast it’s also been a major job-creating project which is a great boost for the local economy,” Minister for Transport and Main Roads Mark Bailey said.

Mr Bailey added that the first two stages of the Gold Coast Light Rail supported over 1,000 local jobs during its construction and a further 200 operational jobs.

Stage 3A will need $709 million to construct, with the investment from the State Government filling half of the funding commitment for the project. In addition, the Federal Government has already invested approximately $112 million.

The Queensland Government is currently seeking additional funding from the Federal Government to fully fund Stage 3A.

Works are getting underway to prepare for major construction on the $709 million Gold Coast Light Rail Stage 3A in Queensland, including fences being set up near light rail stops at Broadbeach to establish a construction compound for the project.

The Australian Government is investing up to $112 million towards the delivery of the Gold Coast Light Rail Stage 3A in Queensland, which is set to slash travel times by about 16 minutes.