The transformation of Western Australia's Mitchell Freeway has commenced with three separate projects now underway, providing a major boost to the local economy and creating thousands of local jobs.

“It's important we plan and deliver the infrastructure needed for the future today, which is why we are investing million in transport upgrades for our northern suburbs to reduce traffic congestion, improve safety and slash travel times.

“Combined with other major transport projects underway, including the METRONET Yanchep Rail extension, these projects are creating and supporting thousands of direct and indirect jobs while providing a welcome boost to our economy,” Premier Mark McGowan said.

The first project is the $232 million Mitchell Freeway Extension project which will extend the road corridor north from Hester Avenue to Romeo Road.

This project is being undertaken by the Mitchell Freeway Joint Venture – a consortium between BMD Construction and Georgiou Group.

The Mitchell Freeway Extension project will include:

Additional funding that was recently announced will allow the delivery of the interchange at Butler Boulevard as well.

In addition, funding has been negotiated for the duplication of Wanneroo Road from south of Romeo Road to Dunstan Road, which will provide a continuous dual carriageway from Wanneroo Road northwards to Taronga Place in Carabooda.

This extension project alone is anticipated to create more than 1,200 local jobs. 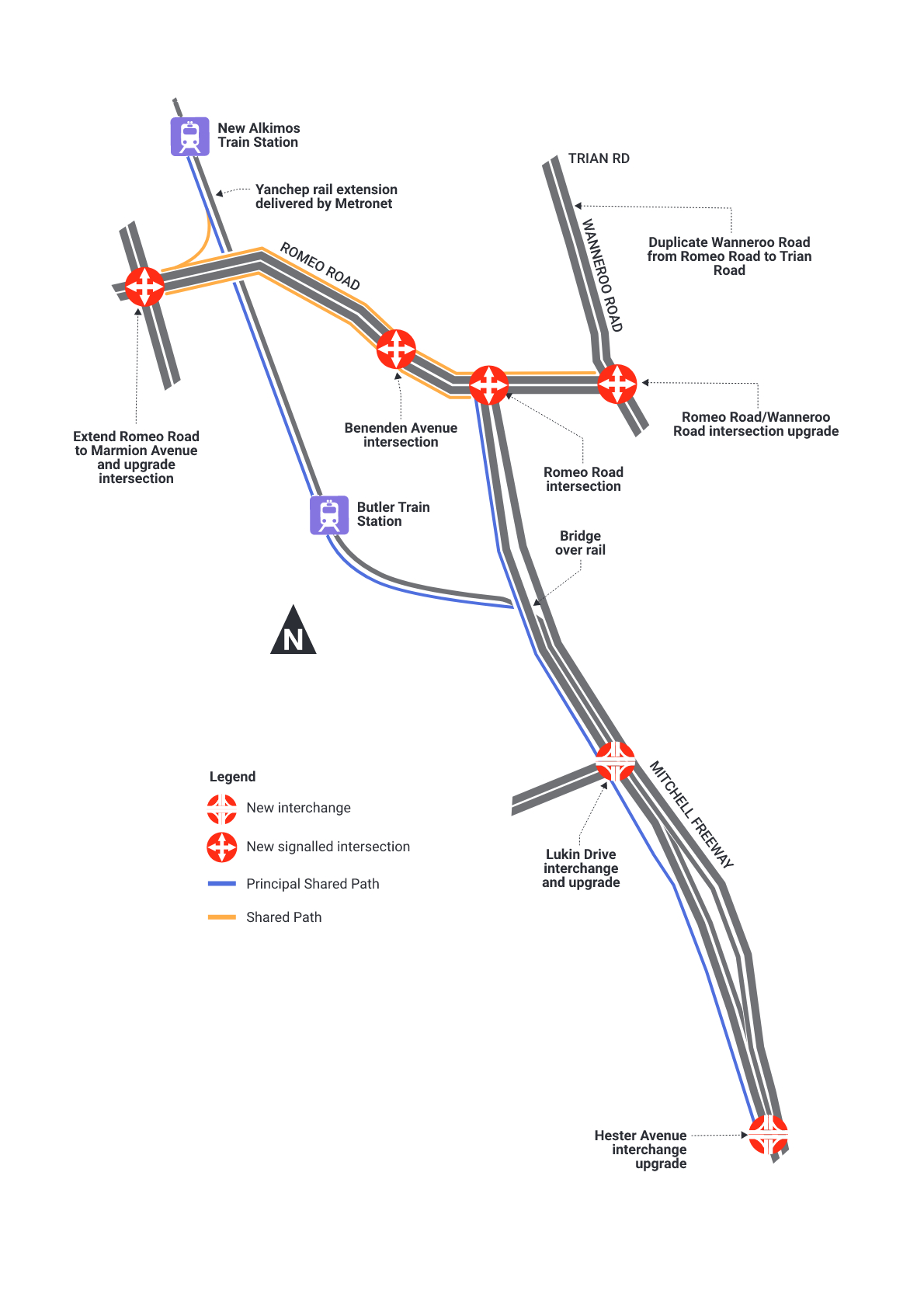 The second project also underway to transform the Mitchell Freeway is the $140 million Smart Freeway project. This multi-million-dollar project will include the installation of popular technology such as CCTV at nine entry ramps southbound from Hester Avenue to Warwick Road.

The Smart Freeway project is expected to create as well as support up to 500 direct and indirect jobs.

Lastly, Mitchell Freeway Southbound is going to be widened to three lanes between Hodges Drive to Hepburn Avenue. This project will also deliver upgrades to the pedestrian and cyclist Principal Shared Path.

This project's scope of works will include building a new lane from Hodges Drive to Hepburn Avenue; an extra lane from Hepburn Avenue entry ramp to Warwick Road; new safety barriers; and new or upgraded shared paths between Ocean Reef Road to Warwick Station.

The three project – with a combined value of $448 million – are jointly funded by the Australian and Western Australian Governments and are on track to be completed by late 2023.

“When complete, the Mitchell Freeway Extension Project will deliver time savings of up to 15 minutes northbound from Narrows Bridge to Alkimos during the afternoon peak.

“The northern suburbs are seeing unprecedented development with the extension of Stephenson Avenue and expansion of the rail network through the METRONET Yanchep Rail Extension,” Transport Minister Rita Saffioti said.

Preliminary planning works are ramping up on the massive Melbourne Airport Rail Link project in Victoria, taking the project one step closer to major development activities such as completion of the detailed Business Case.

The Australian Government has invested $96 million towards congestion-busting projects for Perth to get locals home safer and sooner - including projects to remove bottlenecks in three areas as well as widen the Kwinana and Mitchell Freeways and the construction of a new train station.